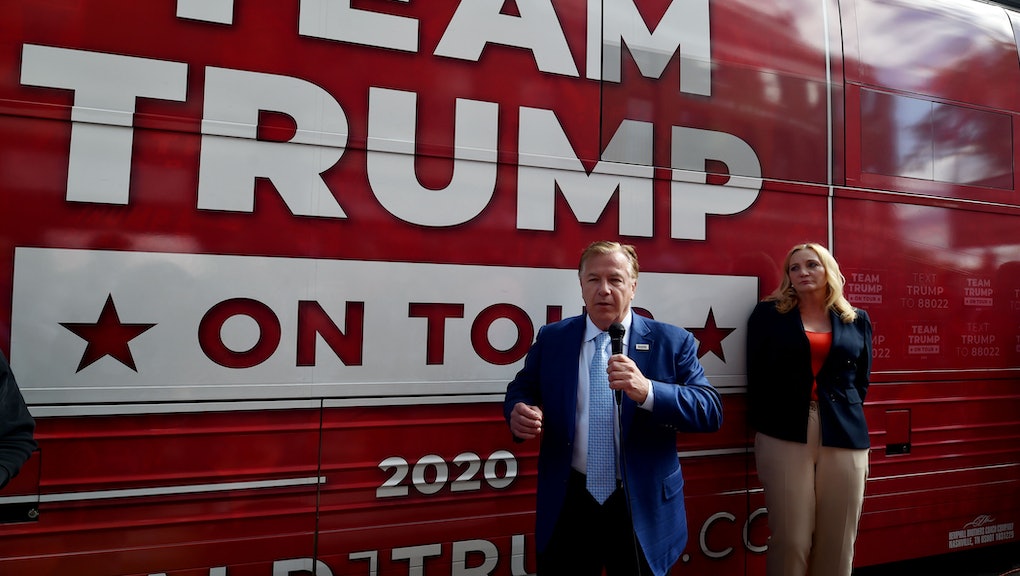 The McCloskeys at a stop in Pennsylvania on the McCloskey Team Trump bus tour on Sept. 30. [SOPA Images/LightRocket/Getty Images]

The St. Louis gun couple apparently gets so many autograph requests that they made postcards to hand out

You should always tip your servers at least 20%. This is one of the few immutable laws of the universe, along with death, taxes, and the fact that eating two, or even three full-size Cinnabon goo-rolls doesn't count so long as you do it in an airport. Always, always, always tip servers 20%, and even more if you can — especially in these pandemic times, when the people bringing you your socially-distant lunch order are quite literally putting their lives on the line to make sure you get a refill of coffee or to see if everyone is "doing alright?"

Tipping well should be as natural as breathing: inhale (your food) and exhale (enough money for your server to make rent).

What tipping should not be is an exercise in bizarre personal vanity, which a lesson evidently not learned by Mark and Patricia McCloskey, better known as the St. Louis gun couple.

According to local CBS affiliate KMOV, while dining at the Original Pancake House in the inner-ring St. Louis suburb of Ladue, Missouri, the McCloskeys augmented their monetary gratuity with not one, but two glossy postcards of themselves, with the message "Patty and Mark McCloskey v. The Mob" on one and "Still Standing" on the other. They even signed one, featuring the now-iconic image of the couple brandishing guns at social justice protesters who had marched near their house.

"The server was like, ‘Oh my God, look what they left me,'" fellow Pancake House patron Andrea Spencer told the station.

In fact, there is a long history in America of instances of racial violence by white people — as the McCloskeys' armed standoff with protesters almost became — being used as instances of collectable memorabilia. Here, however, use of the photographs may be in violation of copyright laws, after the cameraman who took the shot told KMOV that the McCloskeys had not been given permission to use his images.

In any case, presumably fortified by their delicious pancake breakfast the day before, the McCloskeys pleaded not guilty Wednesday to weapons charges for the actions depicted in the very image they now disperse to unfortunate servers. Speaking after the couple's hearing, their attorney Joel Schwartz claimed their case remains a priority for President Trump.

"They have spoken with the president," Schwartz told KCRG, a local ABC affiliate, after his clients pleaded not guilty. "The president contacts them semi-frequently." Perhaps he's hoping for a postcard of his own?