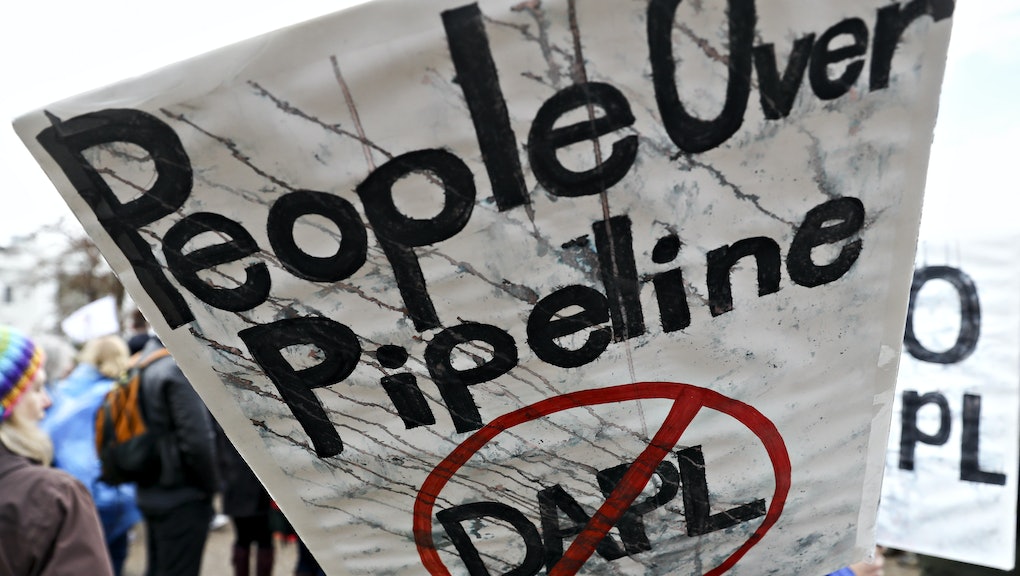 More than three years after protesters at the Oceti Sakowin camp burned their makeshift city to the ground ahead of a mandatory evacuation from heavily armored police, members of the Standing Rock Sioux tribe were handed a significant victory in their continuing fight against the Dakota Access Oil Pipeline. On Wednesday, the U.S. District Court for the District of Columbia ruled that the U.S. Army Corps of Engineers had not "adequately discharged its duties" to investigate the potential damages the oil pipeline — which went online in June 2017 — could have on its surroundings.

Therefore, the court wrote in its ruling, it would strike down a number of federal permits for the pipeline, as well as "remand the matter to the agency to prepare an environmental impact statement."

"After years of commitment to defending our water and earth, we welcome this news of a significant legal win," Standing Rock Sioux Tribe Chairman Mike Faith said in a press release announcing the tribe's legal victory.

"It's humbling to see how actions we took four years ago to defend our ancestral homeland continue to inspire national conversations about how our choices ultimately affect this planet," Faith continued. "Perhaps in the wake of this court ruling the federal government will begin to catch on, too, starting by actually listening to us when we voice our concerns."

Earthjustice attorney Jan Hasselman, who has been arguing the case on behalf of the Standing Rock tribe, took a subtle shot at the Trump White House, which had cleared the way for the pipeline's construction during the early days of the administration.

"The Obama administration had it right when it moved to deny the permits in 2016, and this is the second time the court has ruled that the government ran afoul of environmental laws when it permitted this pipeline," Hasselman said in a statement. "We will continue to see this through until DAPL has finally been shut down."

While Wednesday's ruling was a clear victory for the Standing Rock tribe, it doesn't mean that the pipeline is being immediately pulled offline. Per the court order:

The Corps must prepare an [environmental impact statement], but what is the status of the easement — and, ultimately, the oil — in the meantime? As it has done before in this case, the court will order the parties to brief the issue of whether the easement should be vacated during the remand.

In other words: The fight continues.

More like this
Biden's pledges aren't enough to avoid the worst effects of climate change, new study says
By AJ Dellinger
FEMA said it would reimburse cities for housing homeless people. Most cities ignored the offer
By AJ Dellinger
The CDC's eviction freeze has been unfrozen by a federal judge
By Rafi Schwartz
Stay up to date