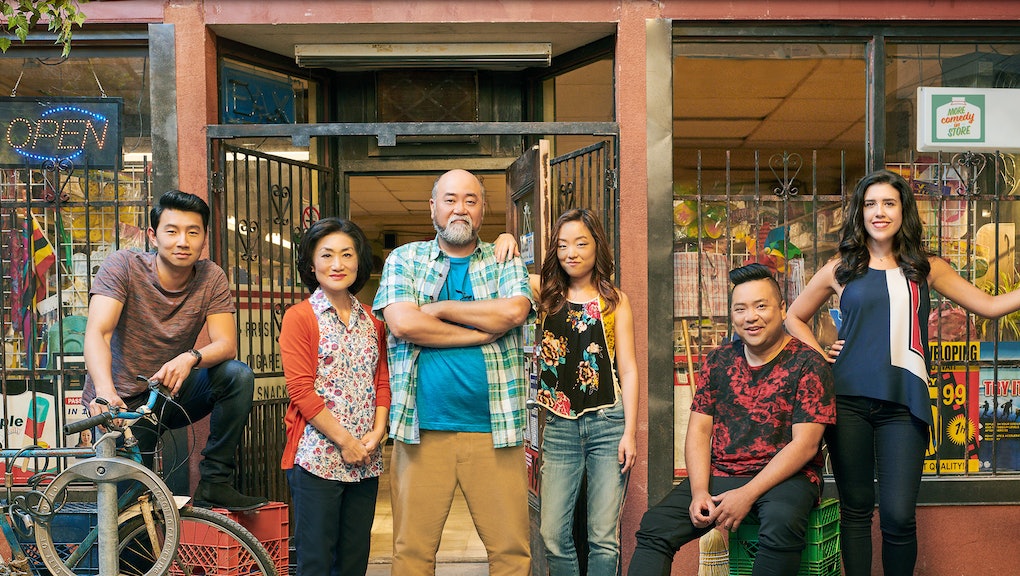 The cast of 'Kim's Convenience'

The Canadian Broadcasting Company (CBC) touted Kim's Convenience as the diverse jewel in its slate of sitcoms. Much like the network's other breakout hit, Schitt's Creek, the series found a much wider audience once it was on Netflix. Kim's Convenience centers on a Korean Canadian family running a corner store in Toronto, and it was beloved for its frank depiction of the Kims' daily life and for being "quietly revolutionary" in how it incorporated and normalized aspects of Korean culture.

But now that the series is over — its fifth and final season dropped last week — two stars of the show have said things weren't as progressive behind the scenes. Actors Simu Liu and Jean Yoon aired their grievances on social media, calling out the sitcom's "overwhelmingly white" production team, “horsepoop” pay, and “overtly racist” storylines, among other alleged missteps.

Liu, who is starring in the highly-anticipated Marvel movie Shang-Chi and the Legend of the Ten Rings, plays Yoon's son on King's Convenience. On Facebook, he wrote that while he "saw firsthand how profoundly it impacted families and brought people together," off camera he was "growing increasingly frustrated with the way my character was being portrayed and [...] with the way I was being treated." Liu said the Kim's Convenience writers overlooked and dismissed the lived experience of the show's Asian Canadian cast. He also claimed the CBC was purposely underpaying them in comparison to the "brand-name talent" on Schitt's Creek, which he claimed had lower ratings than Kim's Convenience.

When a TV critic for Canada's Globe and Mail called Liu's comments "mean-spirited" and "unfair," Yoon took to Twitter to defend her co-star. "The lack of Asian female, especially Korean writers in the writers room of Kims made my life VERY DIFFICULT & the experience of working on the show painful," she wrote.

Yoon noted that Kim's Convenience was based on a play by Korean writer Ins Choi, who also co-created the TV show, but that his white collaborator, Kevin White, became showrunner and "clearly set the parameters," according to Yoon. She said that when the cast got advance copies of their scripts for season five due to Covid-19, some storylines were so "overtly racist" and "extremely culturally inaccurate" that the cast banded together to collectively express their concerns.

Lastly, Yoon took credit for the show's accurate representation of Korean food: "If I hadn't spoken up all the Korean food in the show would have been wrong. Ins doesn't know how to cook or how things are cooked, no one else in the writers room were Korean, and they had no Korean cultural resources in the writers room at all."

Suffice to say, it seems fair to give the Asian Canadian cast of Kim's Convenience most of the kudos for making the series as great as it was. But it's unfair they had to do all that extra labor to conceal the blind spots of a mostly white creative team — while also allegedly being underpaid for their main jobs as actors. This unfortunate context behind such a groundbreaking series underscores that representation doesn't mean a lot if it's only cosmetic. The substance has to stem from authentic voices, too.

More like this
This new Loki teaser touts gender fluidity. But is it just an Easter egg?
By Tim Brinkhof
Michaela Coel dedicated her ‘I May Destroy You’ award to the show’s “essential” intimacy coordinator
By Kara Weisenstein
Billie Eilish doesn't have to answer to us about who she loves
By Kara Weisenstein
Stay up to date