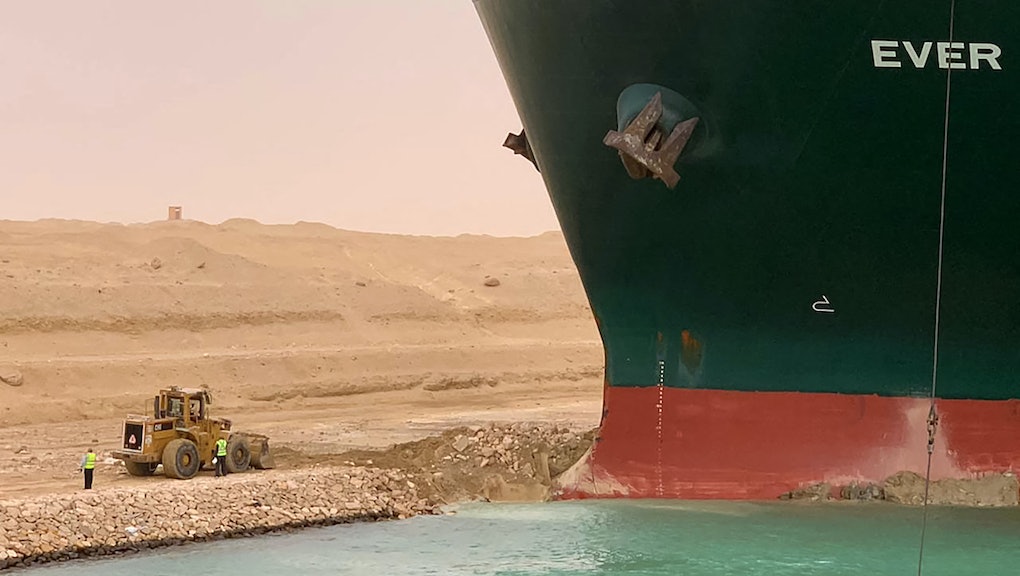 You might’ve heard that there is a very, very large container ship currently blocking the Suez Canal. This puppy is massive. We’re talking the length of four football fields. It’s nearly as big as the Empire State Building, if you were to lay the skyscraper on its side. So when high winds and a sandstorm on Tuesday caused low visibility and poor navigation, causing the ship to run aground and get wedged sideways, blocking the width of the canal and causing a massive nautical traffic jam — that’s a huge problem.

The complete stoppage of trade along one of the world’s busiest routes is a serious issue, and folks on the scene are trying to refloat the gargantuan ship and get the Suez moving again. According to CNN, there are now eight tugboats working to get the thing unstuck. It could take days, maybe even weeks to get traffic flowing again. Yikes.

Lots of people are finding the nautical drama quite amusing, however. Images of two guys and a very small bulldozer sent to rescue the ship spawned a whole bunch of memes on Wednesday, mostly about the futility of modern existence. People compared the, uh, daunting predicament to drinking to cope with existential depression, taking a daily walk to combat COVID-19 anxiety, and how a $1,400 stimulus check is a band-aid for the economic squeeze of the pandemic. LOL, we’re living through such fun times!

On another wild note, hawk-eyed vessel watchers noticed that the ill-fated Ever Given floated in a curious pattern before entering the canal. Tracking data from vesselfinder.com and myshiptracking.com shows what resembles a giant drawing of a penis. A spokesperson for vesselfinder.com confirmed to VICE that the data was accurate.

But believe it or not, it seems unlikely the drawing was intentional. Nautical experts pointed out it'd be almost impossible for the massive ship to make tight circles like that. Rather, the big-ass boat was likely anchored and spinning innocently in circles for a while.

Finally, while the Suez Canal Authority hasn't managed to free the huge container ship, they did find time to produce a video depicting their efforts to dislodge it, scored to some dramatic music. The knock-off Hans Zimmer vibes are unreal.

Not to be outdone by the internet, late-night hosts poked fun at the incident too. "Yeah, it's a tough day for that captain," Jimmy Fallon riffed on Wednesday. "Right now he’s trending worldwide on Twitter as #dockblocker."