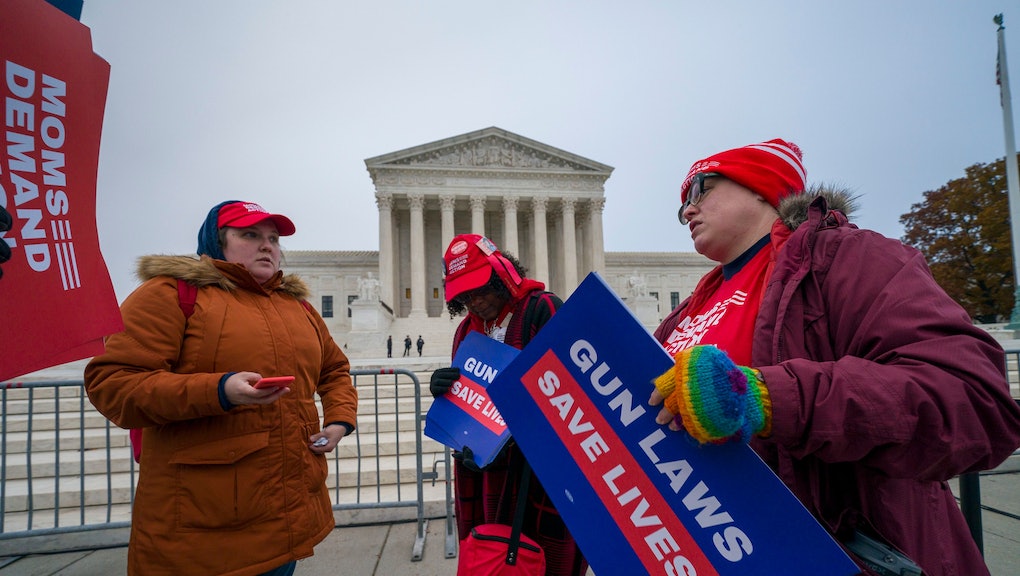 Gun rights are one of the most hotly contested issues in America. Battles have raged over regulation at the state and federal levels for decades, with few landmark decisions from the Supreme Court. The most recent came in 2008, in Heller Vs. District of Columbia, when the court ruled that the Second Amendment did apply to individuals. Two years later, the court ruled that its initial ruling applied at both the federal and state level.

Since then, numerous state legislatures have passed laws restricting gun usage, whether by expanding background checks or limiting open carry laws. While gun groups like the NRA have tried to get the Supreme Court to weigh in on these laws, it has generally avoided doing so. Until now, that is. Today, the justices began hearing oral arguments in a case with the potential to reshape the gun dispute — and not in the way that people who want more gun control would like.

The current court battle began with a New York City regulation that banned handgun owners from bringing their weapons anywhere in the city outside their homes, and firing ranges within the city. This meant they couldn’t transport guns between homes, or to gun shows and ranges outside of the city. After several gun owners and a local NRA group sued, the city fought to uphold the law and won several battles in lower courts. However, with a potential Supreme Court disaster looming, the city repealed the law and argued that the case should be dismissed on the grounds of being a moot issue. The Supreme Court rejected that argument and agreed to hear arguments about both the mootness issue and the underlying challenge to the law in court.

"The city of New York never expressed any doubt about the constitutionality of these regulations when they were winning in the district court and the court of appeals," argued Paul Clement, who represents the gun owners. "And then lo and behold, all of a sudden the city decides you know maybe we don't need these regulations after all."

What’s at stake here is the future of gun control. The five conservative justices could potentially issue a broad ruling that solidifies certain rights of gun owners, even as Democrats have managed to dislodge the NRA’s iron grip on some state legislatures around the country.

In its 2008 decision, the court ruled that the Second Amendment upholds citizens’ rights to protect themselves at home with a gun. At the time, Chief Justice Kennedy, who sided with the majority, pressured Antonin Scalia, who wrote the opinion, to include language specifying that the ruling "cast no doubt on" bans on "carrying firearms in sensitive places such as schools and government buildings, or bans on dangerous and unusual weapons," according to NPR. Now, the court — which is more conservative than it was when that ruling was issued, with Kennedy having been replaced by Brett Kavanaugh — is in a position to potentially alter that 2008 ruling in a way that could deem any type of restriction on public gun use unconstitutional.

"I do think it will make a difference that Justice Kavanaugh is on the court," Clement told NPR. "Now he can interpret the Constitution in a different way in his new perch. He's somebody who I would think is going to be receptive to arguments that the Second Amendment fully protects an individual right and is not strictly limited to the home."

Of course, this may not happen. The judges could end up dismissing the case on mootness grounds, or rule against Clement and the gun owners. But if they don’t, and the NRA’s plan succeeds, the landscape on gun rights will shift further to the right than it’s gone in a generation.

More like this
Nearly half of Republicans believe absolute nonsense about Trump's Capitol coup
By Rafi Schwartz
New York legalized weed and the NYC police commissioner is real sad about it
By Rafi Schwartz
The debut of 'Gutfeld!', Fox News's new comedy show, went about as well as you'd expect
By AJ Dellinger
Stay up to date