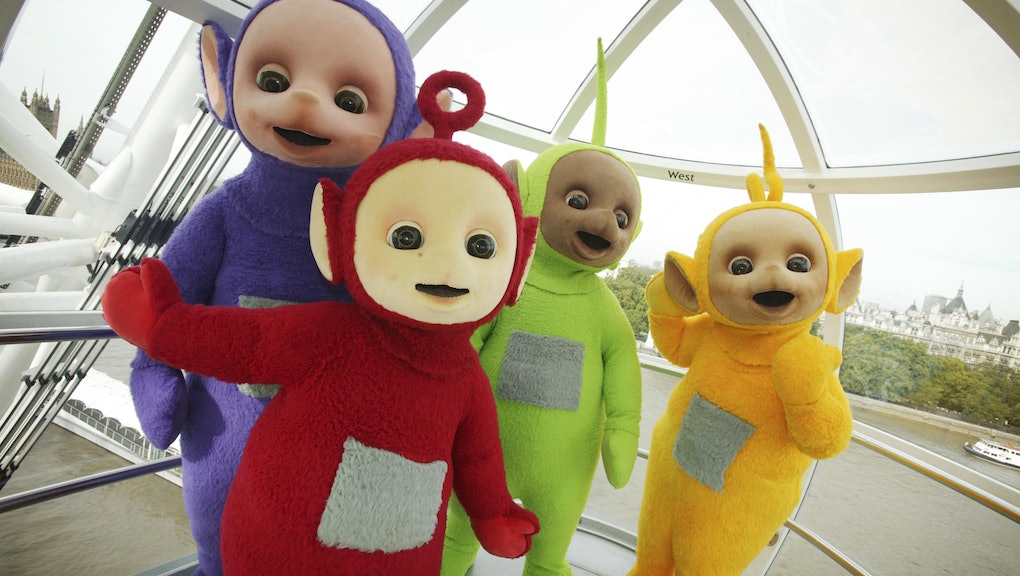 If Billie Eilish didn't know that the Spice Girls were real until 2017, I'd wager that a good portion of Gen Z might not be familiar with the Teletubbies, the alien-like toddlers who took the world by storm in the late '90s. But they're about to get introduced to the strange gender non-conforming children's television stars as they've now entered the ever-growing space of cultural figures endorsing getting a Covid-19 vaccine.

While it's unclear how much cultural import the Teletubbies have today, their social media pro-vax ad revealed that they're members of Gen Z themselves, and the same age as new pop queen, Olivia Rodrigo. But two decades ago, not only was the show a massive hit; a single based on its theme song reached number one on the charts in the UK. The show had a kind of wonder that even snagged adults' attentions, albeit even if they were just parents getting sucked into the bizarre, gibberish-speaking forms dancing around on the TVs their children were watching, with the Teletubbies themselves having televisions of their own in their bellies (was it meta? who's to say).

With their vaccine cards revealing their adult status, it would seem that while being children's TV mainstays (Nick Jr. still airs the show), they're not necessarily encouraging child vaccination, which is still limited to those 12 and up. Perhaps they're targeting the gays, seeing as one beloved Teletubby nuance was that Tinky Winky became somewhat of a queer icon, seeing as his antenna on his head was shaped like a triangle and he was purple. (Pour one out for the queer youth of the 90s who had so much less to grab on to, and just feel blessed you're not clinging to something called Tinky Winky for queer representation, youngsters).

The Teletubbies are joining the ranks of a myriad of celebrities who have stepped up to post about getting their Covid vaccines on social media to encourage the public to get vaccinated like Christie Brinkley, Steve Martin, and Samuel L. Jackson, among many others. The government has also stepped in, affording a 50 million dollar campaign featuring hundreds of companies and celebrities like Angela Bassett and John Leguizamo, among others, in what is one of the largest public education campaigns of all time.

They hope to generate what researchers call the Angelina Jolie effect, named after when she penned a 2013 op-ed on her preventative double mastectomy that sparked a huge spike in preventative genetic testing. The Teletubbies wielding the power of Angelina Jolie is unlikely, but they are trending on Twitter and putting vaccine awareness into the discourse for the day — and for that, we thank them.