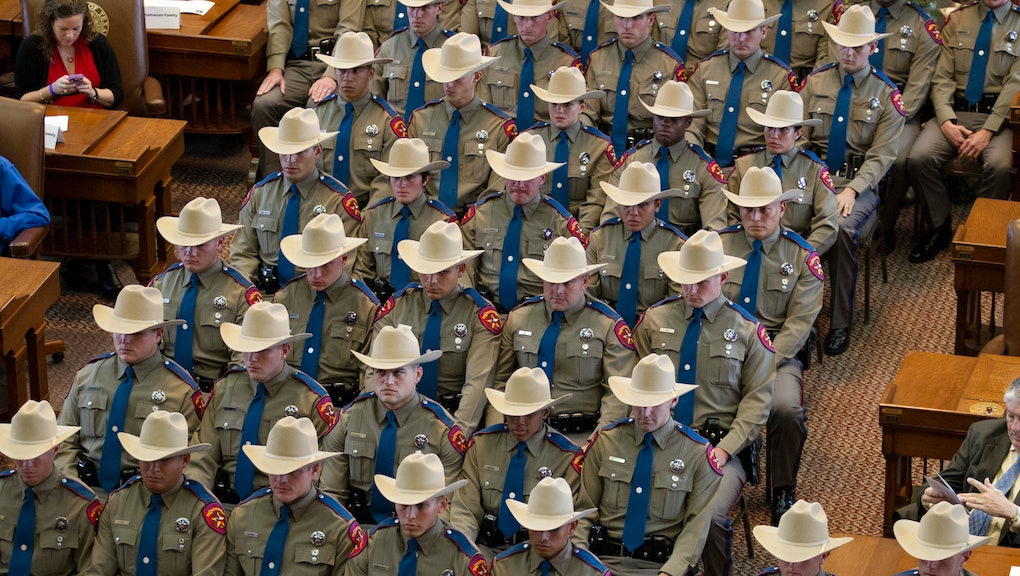 The Texas Rangers will stop hypnotizing people, raising lots of questions I didn't know I had

The Texas Rangers are arguably the most famous law enforcement unit in the country — America's ur-cops, whose rugged brand of frontier justice is as much the stuff of Hollywood myth-making as it is actual, unsurprisingly problematic history.

As it happens, that history — one rife with racist violence and founded as part of nation's broader tradition of colonial genocide — has been bolstered in recent decades by a decidedly ignoble practice: hypnotism. At least, until now.

This week the Texas Department of Public Safety confirmed to the Dallas Morning News that state law enforcement had discontinued the use of hypnosis, more than 40 years after introducing the, uh, questionable technique into their investigatory tool box.

"DPS has developed more advanced interview and interrogation techniques that yield better results," a spokesman for the agency explained to the Dallas Morning News, adding that the use of hypnosis in criminal investigations just ended in January. The change comes nearly a year after a Dallas Morning News investigation uncovered paperwork showing that DPS has turned to hypnosis in its work — most often carried out by the Rangers — nearly 2,000 times since 1980, and as recently as this past October. All told, the Dallas Morning News identified "dozens" of instances where people have been sent to jail, and even death row, based on evidence obtained in part through hypnosis of victims or witnesses.

The efficacy of hypnotic memory retrieval is deeply in debate, with Johns Hopkins Medicine noting that "researchers found that hypnosis does not work well as a memory-recovery method" and that "people who have been hypnotized tend to feel confident that their memories are accurate, contributing to the persistence of false memories."

"It invites inaccuracies, false memories, and the creation of 'super' witnesses who are unnaturally confident, often impervious to cross-examination, and therefore disproportionately impactful," a panel of 28 cognitive scientist experts told the U.S. Supreme Court earlier this year, asking that the court hear the case of convicted murderer Charles Flores, who currently sits on death row, in part thanks to evidence gleaned through hypnosis. The court ultimately declined to consider Flores's case.

In 2016, the Virginia Supreme Court freed Keith Allen Harward after DNA evidence exonerated him for a 1982 rape and murder case. He'd already served 33 years of a life sentence based in part on the identification of a security guard who it was later determined had been placed under a hypnotic trance.

While other states do still allow the use of hypnotically obtained evidence in criminal cases, the Dallas Morning News reported that Texas is the only one known to have had its own certification program for members of law enforcement to qualify for the practice.