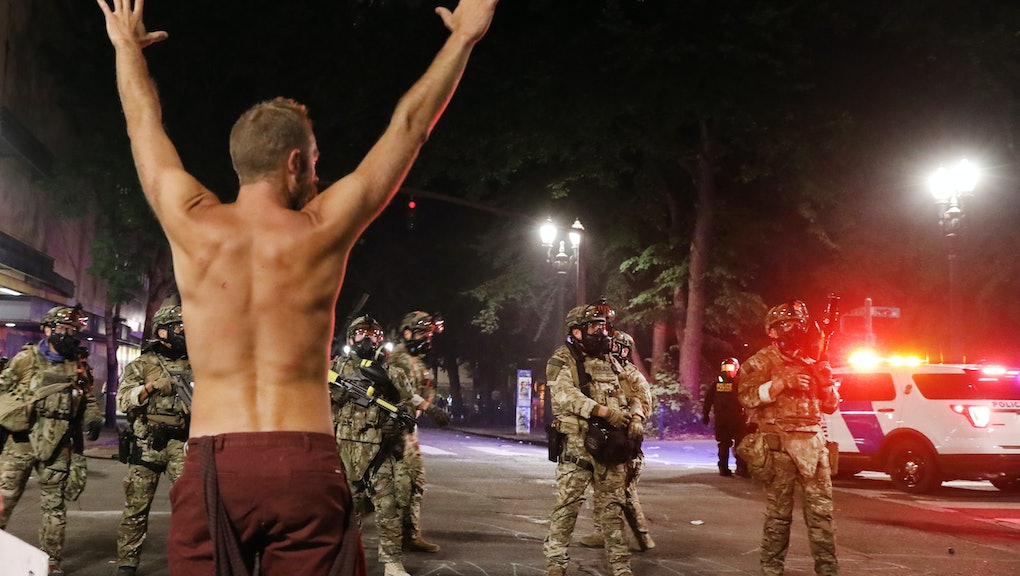 The Trump administration says it's vacating Portland, but no one is sure what that means

After weeks of serving as an unwelcome, and largely anonymous occupying force in Portland, Oregon, the Department of Homeland Security will allegedly start pulling back its federal troops from the city. Oregon Gov. Kate Brown announced on Wednesday that local and state officials had struck an agreement with the Trump administration to begin the withdrawal.

Decrying the federal agents as having "brought violence" to her state, Brown stated that "starting [Thursday], all Customs and Border Protection and [Immigration and Customs Enforcement] officers will leave downtown Portland." Instead, "local Oregon State Police officers will be downtown to protect Oregonians' right to free speech and keep the peace," she said.

Acting Department of Homeland Security Secretary Chad Wolf offered his own assessment in a press release, stating that "state and local law enforcement will begin securing properties and streets, especially those surrounding federal properties, that have been under nightly attack for the past two months. Oregon State Police will coordinate with Federal Protective Service (FPS) officers to ensure all federal facilities remain protected and secure."

"This plan is possible due to the valiant efforts of the DHS law enforcement officers protecting federal property in Portland from violent activity for the past two months," Wolf added.

Meanwhile, federal agents will be deployed to various other cities, the Department of Justice announced Wednesday. But while Wolf and Brown both seem to agree that some federal troops will at least be exiting Portland, it's unclear exactly how, and when, that exit will take place.

"You hear all sorts of reports about us leaving — we’re not leaving until they’ve secured their city," President Trump declared just hours before Wolf and Brown announced their deal.

"We told the governor. We told the mayor. Secure your city. If they don’t secure their city soon, we have no choice. We’re going to have to go in and clean it out," he added, offering no other details.

Indeed, while Brown's announcement seemed to indicate that at least some federal agents would be leaving her city as early as tomorrow, the Department of Homeland Security's press release offered a decidedly less specific timeline, writing (emphasis mine):

The Department will continue to maintain our current, augmented federal law enforcement personnel in Portland until we are assured that the Hatfield Federal Courthouse and other federal properties will no longer be attacked and that the seat of justice in Portland will remain secure. This has been our mission and objective since the violent, criminal activity began.

The Department will continue to re-evaluate our security posture in Portland, and should circumstances on the ground significantly improve due to the influx of state and local law enforcement, we anticipate the ability to change our force posture, as we do everyday at our other 9,000 federal properties we protect across the country.

As The New York Times noted Wednesday, the usual units of federal officers who typically provide security inside federal buildings — such as Portland's Hatfield courthouse — will also remain in place.

Even Brown's announcement on Twitter seemed to leave a measure of ambiguity over who exactly was leaving and when. While many federal troops in Portland have been, as Brown indicated in her tweet, officers from CBP and ICE, the Trump administration has previously cracked down on peaceful protests using federal officers from other agencies too.

Oregon Sen. Ron Wyden (D) also expressed doubt about DHS's commitment to fully leaving Portland, tweeting: "I will watchdog today’s announcement to ensure that it happens, and is not the administration’s usual penchant for fiction."