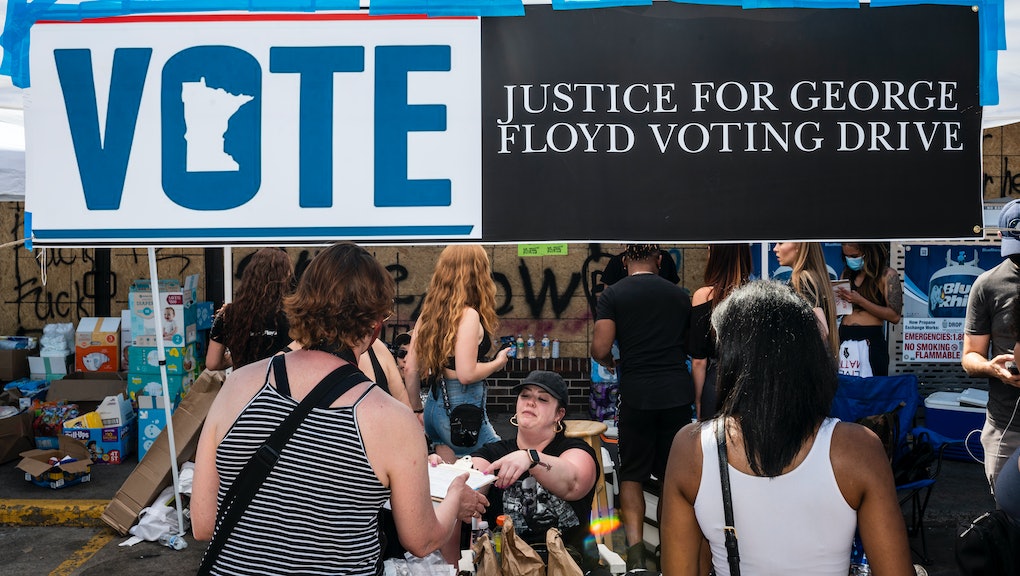 President Trump's much-touted play to flip Minnesota red for the first time in decades took an ominous turn this week with reports that a campaign official was actively looking to recruit former Minneapolis cops through the city's infamously villainous police union to serve as poll watchers in unspecified "problem areas" across the city.

"Poll challengers do not ‘stop’ people, per se, but act as our eyes and ears in the field and call our hotline to document fraud,” the email reportedly explained. “We don’t necessarily want our poll challengers to look intimidating, they cannot carry a weapon in the polls due to state law. … We just want people who won’t be afraid in rough neighborhoods or intimidating situations."

The request comes as the Trump campaign, and the president himself, have ratcheted up their calls for various poll watchers across the country — a move many election experts fear will amount to blatant voter intimidation, as was the case in Virginia earlier this year, when Trump supporters blocked early voters at a polling center in Fairfax.

It also follows just days after a private security firm in Tennessee abandoned plans to recruit armed personnel to guard polling sites in Minnesota — a move the company's chairman explained was "to make sure that the antifas [sic] don’t try to destroy the election sites." Minnesota Attorney General Keith Ellison subsequently announced an investigation into the firm, prompting the company to submit written assurance it would not recruit private security for Minnesota polling sites.

Just this week, Ellison released guidance for voters regarding their rights on Election Day — particularly when it comes to voter intimidation. And while the guidance does not specifically mention the effort to recruit armed security or ex-police officers, it is clearly an attempt to allay the fears those efforts may have instilled in the public.

"Minnesota and federal law are clear: It is strictly illegal to intimidate or interfere with voters," Ellison wrote in a statement accompanying the guidelines. “As attorney general, I do not expect to have to enforce these laws. But I will not hesitate to enforce them to the fullest extent if necessary to protect Minnesotans’ right to vote."

In a separate statement to the Star Tribune, City Councilman Jeremiah Ellison — the attorney general's son — pointed out the dangers inherent in Willingham's solicitation to Kroll.

"To the extent that Bob Kroll wants to participate in a voter intimidation campaign, the city will take that very seriously," Ellison told the paper. "There’s the clear dog whistle of ‘rough area,’ and we need people who aren’t ‘easily intimidated,’ and people who aren’t scared."

While a limited number of poll changers are legally allowed at polling sites within the state, they can challenge a voter "if and only if they have personal knowledge of that voter’s ineligibility," according to state law. "Suspicion is not a basis for making a challenge."

More like this
Turns out trying to "release the Kraken" didn't work out so well for the pro-Trump lawyer team
By Rafi Schwartz
Texas Democrats are literally leaving the state to protest a GOP-backed voter suppression bill
By Rafi Schwartz
Nancy Pelosi took a stand on the Jan. 6 committee, and it left Republicans whiny as hell
By Rafi Schwartz
Stay up to date