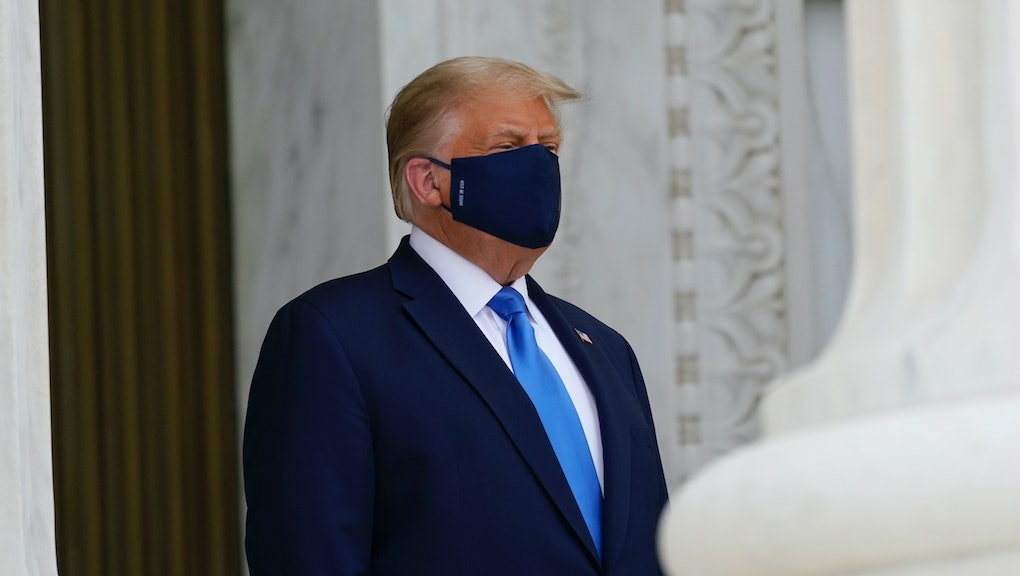 President Trump rarely ventures out of his hermetically sealed bubble of sycophantic approval these days, so whenever he does, those infrequent excursions into the outside world carry with them the inherent risk of the sort of unfiltered public feedback the president has worked so hard to excise from his daily life. This is, after all, a man whose pathological craving for mass approval is so overwhelming that he resumed his MAGA rallies in the middle of a global pandemic, just to hear people shout nice things at him.

So given that the president A) seems biologically incapable of assimilating even the mildest disapproval and B) has a proven track record of concocting laughably insane excuses for those few and far between moments when he's actually been faced with, shall we say, a less than glowing reception, my question to you is as follows:

How's he gonna explain this one?

Let's go in for a closer look, shall we? Computer ... enhance:

Now, when I ask "how's he gonna explain this one?" I want to be clear: I don't mean it in the "Well, I'd like to see ol' Donny Trump wriggle his way out of THIS jam!" gotcha sense. I am fully, if painfully, aware that the optics of the president of the United States being booed on the steps of the Supreme Court while paying his "respects" to a deceased justice lying in state are, at this stage in our rapid descent toward totalitarianism, so ridiculously inconsequential that I'm under no illusions that any of this will actually, y'know, matter in the grand scheme of things.

No, what I mean is: I quite literally, sincerely, want to know how he's actually going to explain what happened today. Thankfully, history offers a few illuminating points of reference that could serve as a model for what comes next:

1) The Spicer: There is a non-zero chance that the president will send out his shoutiest aide to simply badger and belittle the public into believing that what they saw with their own two eyes didn't actually happen.

2) I'm laughing, actually: Unlike The Spicer, this tactic doesn't so much reject reality, as fully embrace it. Like, embrace-embrace it. After the president and first lady Melania Trump were furiously booed during Game 5 of the 2019 World Series in Washington, D.C., the president's largest, oldest child insisted that, actually, that's a great thing because, uh, Washington is bad, and if Washington thinks something else is bad, ipso facto that thing is actually very good. Ta-daaa!

3) The try, try again: This one takes a little more effort than the other options, simply because it involves risking multiple trips outside the White House in order to find a perfect Goldilocks moment. The president tried this one last year when, after being jeered at both the World Series and an Ultimate Fighting Championship match in Manhattan, he tried an LSU-Alabama college football game on for size. And wouldn't you know it, he was enthusiastically cheered. If there's a lesson here, it's that perseverance pays off, I suppose. The challenge for Trump now, though, is attending enough funerals for overwhelmingly beloved national figures to find one with a friendly crowd.

Ultimately, booing and shouting "vote him out" at a man who just one day earlier threatened to simply ignore the results of an unfavorable election is the sort of thing that'll get you a sore throat and not much else. But if nothing else, it offered a brief moment of cathartic release amidst a week of doomscrolling and worst case-scenario forecasting. And for that I am grateful.