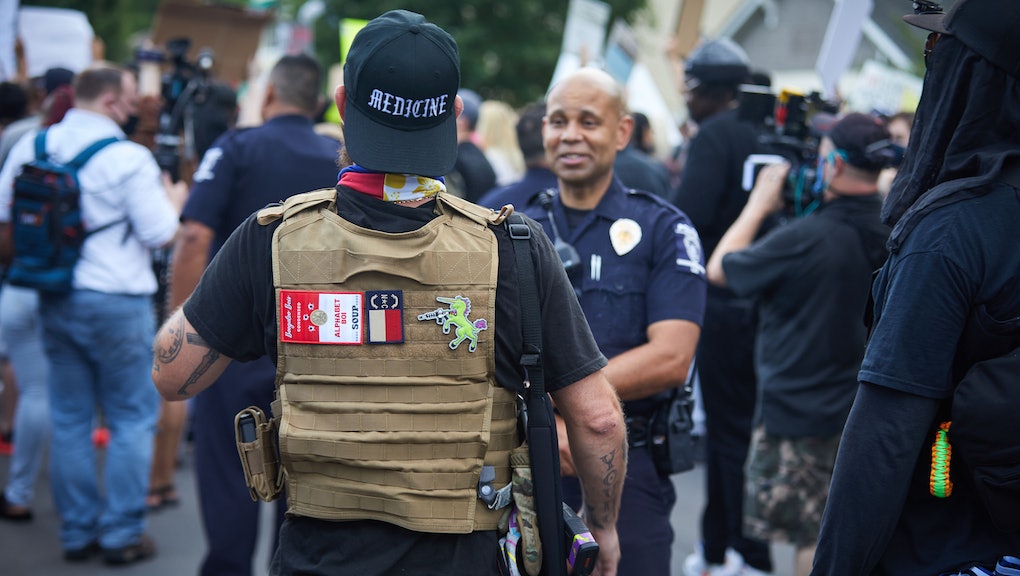 The violent Boogaloo movement is finally banned on Facebook

Facebook has finally put a dent in part of its growing extremist problem. On Tuesday, the company announced that it is removing accounts, pages, and groups connected with the violent, anti-government Boogaloo movement. The bans come as advertisers are participating in a month-long organized boycott of Facebook, withholding their ad dollars until the company takes action to address hate speech on its platforms.

In a press release, Facebook announced that it had removed 220 Facebook accounts, 95 Instagram accounts, 28 Pages, and 106 groups that were believed to be a part of a network of users looking to commit acts of violence. The company described the now-banned accounts as being tied to the far-right extremist Boogaloo movement and served as a sort of recruitment network. Mic reached out to Facebook for additional details but the company did not respond.

Facebook says it has been closely monitoring the Boogaloo movement since 2019, and claimed to have noted the group's presence at the Gun Rights Rally that took place in Richmond, Virginia in January.

In April, London-based think tank the Institute for Strategic Dialogue (ISD) released a study showing how far-right radicals were using the coronavirus pandemic and anti-government sentiments during quarantine to grow the Boogaloo movement. Weeks later, Tech Transparency Project laid out a detailed analysis of the extremist group's growing presence on Facebook. Despite these reports, apparently being aware of the growing presence of the Boogaloo movement, and noting that many members have "a goal of a civil conflict" while engaging in "racism and anti-Semitism," Facebook largely allowed the group to operate. It wasn't until June that Facebook announced it would limit the spread of Boogaloo-related content by stopping pages and groups associated with the movement from being included in its recommendation algorithm and by demoting associated users and groups in search results.

By the time Facebook took action to suppress (but not remove) Boogaloo content, members of the loosely organized movement had already committed heinous acts of violence offline. The group, which has the express goal of inciting a civil war, has attempted to capitalize on the ongoing civil rights demonstrations taking place across the country. On May 30, three men associated with the Boogaloo movement were arrested with filled gas cans and Molotov cocktails after telling an FBI informant they intended to cause violence at protests in Las Vegas. Two more so-called Boogaloo Bois were arrested in South Carolina the same weekend. They were armed with pistols and long guns and were on their way to a protest, allegedly with the intent to start a riot. Members of the Boogaloo movement have also been implicated in multiple murders, including the killing of a security officer in Oakland on May 29 and a police officer in Santa Cruz on June 6. It is believed that the murders, as well as other planned acts of violence, were organized on Facebook.

Facebook's decision to ban members of the Boogaloo movement comes as the company faces an ongoing boycott from major advertisers who are attempting to force the company to take more action against hate speech on its platform. The Stop Hate for Profit, organized by the Anti-Defamation League, has amassed more than 100 major corporations including Coca-Cola, Unilever, and Verizon who have agreed to pull advertising from all Facebook-owned platforms for at least the month of July. The companies and organizations are demanding a set of changes from Facebook, including new efforts to prevent hate speech and other harmful content from being cultivated and spread on Facebook, Instagram, and WhatsApp. Facebook has already announced that it will flag posts that violate the rules of the platform, including content from people of public interest like Donald Trump. The decision marked a dramatic reversal of the company's position expressed just weeks earlier by CEO Mark Zuckerberg, who said the company wouldn't flag posts for fear of playing the role of "arbiter of truth." Now that the company has also taken action against the Boogaloo movement, it will be curious to see what other types of content Facebook is actually open to moderating when facing a mass exodus of ad dollars.