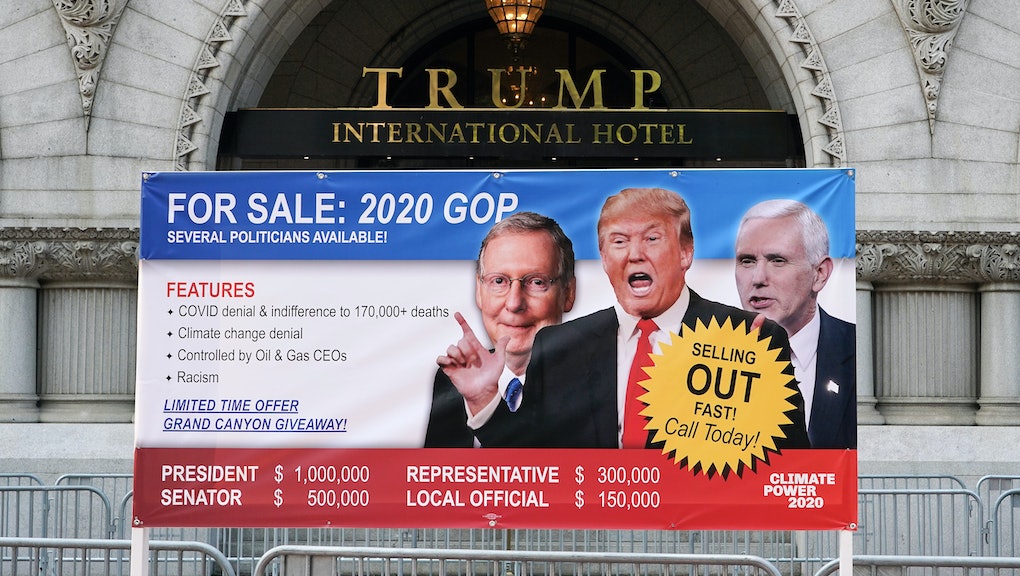 Given the unyielding crush of news this week, an update on President Trump's extremely transparent grift operation to funnel as much money as possible into his various properties might seem like a small, inconsequential diversion from ongoing social justice protests, natural disasters, and political chest-thumping. But, dig a little deeper, and it becomes clear that Washington Post reporter David Fahrenthold's Herculean efforts to track what money is shuttling between between the government and the Trump organization and why has struck a nerve with the White House in a way more reminiscent of a banana republic than a functioning democracy.

On Thursday, Fahrenthold — along with the Post's Josh Dawsey and Joshua Partlow — published a lengthy report detailing nearly $1 million charged to the U.S. government by the Trump Organization. The report describes how the president's frequent trips to his properties result in various federal agencies like the Secret Service, as well as the requisite entourage that accompanies him when he travels, funneling tens of thousands of dollars into Trump's eponymous company — despite the president's claim that he had separated himself from all his pre-presidential business interests after taking office.

The report is both alarming in its allegations and stultifying in its obviousness. We've all seen the president travel to, talk up, and repeatedly promote his properties without shame over and over again in the past three-and-a-half years. He's hardly keeping his conflicting interests — namely, the business of running a country, and the business of being in business for himself — a secret.

What is shocking, however, is the White House's response to questions submitted by Fahrenthold for this latest report.

Per the Post, White House Deputy Press Secretary Judd Deere reiterated to Fahrenthold in a statement Trump's nebulous promise that he'd "turned over the day-to-day responsibilities of running the company though he was not required to, [and] has sacrificed billions of dollars."

The Washington Post is blatantly interfering with the business relationships of the Trump Organization, and it must stop. Please be advised that we are building up a very large "dossier" on the many false David Fahrenthold and others stories as they are a disgrace to journalism and the American people.

To be clear: This is a government official using his office as the mouthpiece for the president to threaten one of the premier journalists covering the White House today. All for investigating a private business the president himself has claimed he no longer runs.

In the grand scheme of things, it's not a natural disaster, or a national social justice movement, or even the forced pageantry of a political convention. But in its own way, Deere's statement marks a deeply troubling inflection point for the country. And it's a sign that whatever Fahrenthold is doing, it's making the right people scared.