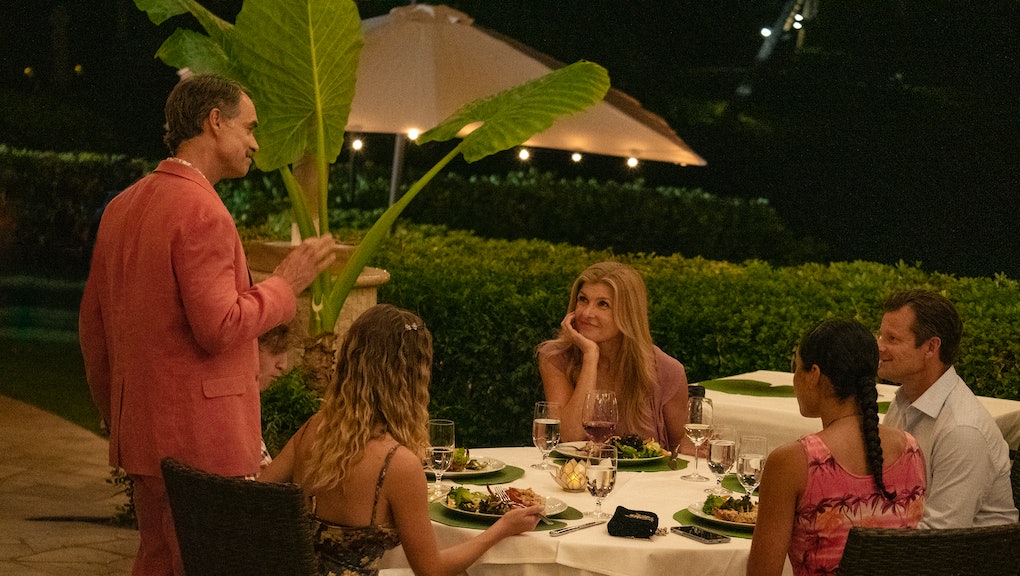 'The White Lotus' is the searing satire on wealth we deserve

Television creator Mike White is no stranger to using the format to contemplate the complexities and dualities of humanity under capitalism. His last HBO vehicle, Enlightened, tackled the subject in 2011, following its lead Laura Dern as she has a corporate-infused nervous breakdown, rehabilitates herself in Hawaii, and comes back to confront all of the nefarious ways big business made her sick — only to be confronted back by its unwillingness to bend.

While Enlightened was a critical success, a pre-Trump viewing world didn't necessarily crave wealth satire like we do today. In 2011 we could give a nod to the accuracy, and maybe even the relevance or necessity of poking fun at the cogs of corporate America, but it didn't feel essential. Today though, we are in the second year of a fluctuating global pandemic that has laughed in our faces at our inability to work as a global community. We are staring down the barrel of a pre-apocalyptic climate report. We are painfully clear that capitalism does not work for the planet, nor humanity. We are in a collective existential crisis that has primed us perfectly for HBO's The White Lotus. (And perhaps it is all the more dark that a show is the salve to what needs to be systemic societal change).

Completely written and directed by White, the show's intro alone sets the scene; pans of bougie vacation wallpaper featuring tropical fruits, animals and locales begins to rot and mold as the show's eerie, breathy, chanting island psychedelia soundtrack plays. We meet our main characters on a fancy private charter boat where they are headed to their Hawaiian resort, The White Lotus. College students Olivia (Sydney Sweeney) and Paula (Brittany O'Grady) give cynical mock biographies of the passengers, including Olivia's parents, whom they refer to as billionaires trying to recruit them to a sex ring for the illuminati. Immediately we are confronted with one of the more bizarre conundrums of today's class disparity: what does a woke-er rich population, that's aware of its privilege and society's awakening disdain for it, do with itself (see: Billionaires flying to space)?

The answer here for everyone is that they're trying to escape it. But this is a dark comedy, and we know from the first scene, a flash forward to the end, that someone has died at The White Lotus. The only person that we for certain know stays alive is trust fund real estate mogul, and resident douchebag archetype, Shane (Jake Lacy). He exemplifies one of the show's greatest qualities, which is playing with tensions. Shane becomes exponentially douchier throughout the season's five episodes, as he fixates on how he's been wronged by the hotel manager, Armand (Murray Bartlett). While he obsesses about feeling as though he's not been given what he deserves at every turn, his new bride Rachel (Alexandra Daddario) is slowly realizing she's made a huge mistake by marrying "up," while the audience keeps waiting for what must be Shane's comeuppance. And that's the beauty. He doesn't appear to have one. We want him to get comically eaten by a shark, the whole time, but we know this asshole lives.

And The White Lotus doesn't stop there in playing with all of the wealthy archetypes we love to hate. Shane's mom arrives, played by the always high caliber Molly Shannon, who reminds her new daughter-in-law just what kind of party planning, wealth-courting, stay at home monster she has signed up to become. There is the older, eccentric rich woman Tanya (a standout performance from Jennifer Coolidge) — "an alcoholic lunatic" in her own words — who is there to spread her mother's ashes, but ends up finding solace in White Lotus spa coordinator Belinda (everyone's favorite, Natasha Rothwell), and exploiting her kindness in a very upstairs downstairs kind of way. When Belinda gives, Tanya dangles the idea of helping her start her own wellness empire. When Belinda doesn't, Tanya taketh away.

There is the Goop-centric CEO Nicole (Connie Britton) who resents being told that she "climbed a Me Too latter" — she is a tastily dark take on a new version of the female CEO, one who cosplayed compassion to get a #TimesUp sheen on her profile, but is secretly far from living that ethos — and her somewhat cucked husband Mark (Steve Zahn). Through the couple's relationship with the young people they are responsible for — the aforementioned Olivia and Paula, and their son, a technology-obsessed awkward observer of the chaos around him, who also gathers secrets and plays with his family's emotions — the tensions are often exposited, and that is when the show becomes its own meta commentary on wealth disparity.

When Paula is presented as having allergies to everything, needing prescriptions for various mood disorders and claiming she's been diagnosed as a "highly sensitive person," Connie Britton quips back, "by who, Lena Dunham?" Britton's character continues to prod the Fran Lebowitz and Camille Paglia-reading young women with pleas that it's young, straight white males who are now the odd men out who need compassion and are sex shamed — a parody they continue when Shane's character claims he's being gaslit by Armand, backwardly quipping, "People have been coming for me my whole life. I'm just playing the hand I was dealt." As the tension builds, Steve Zahn has an entire breakdown monologue in which he skewers criticisms of wealth. "Nobody cedes their privilege," he insists. "It's just not human nature."

Everyone in The White Lotus is a foil for someone else at all times — and within that, those foils shift, just as they do in actual society under capitalism. One day someone is up, the next they are down. One day someone is your enemy, the next they are your business partner. It is a metaphor for the lack of morality within capitalism. You could even see the overall play on death in the show as a metaphor for death capitalism, a satire on the inevitable demise of society that seems unavoidable at the present moment without significant shifts in culture.

You will have to watch and hopefully enjoy the dark, funny and hallucinatory ride that is The White Lotus to find out which of our loveably hatable characters is fated to meet their end, but what we do know is that a second season has been ordered by HBO, which will be an anthology at a new White Lotus property. Only time will tell what new existential realities of our society will evolve to be mocked, which is a depressing thought, but at least we will get some more grade A satire out of it.

More like this
Merely changing ‘The Activist’ from game show to documentary misses the point
By Shamira Ibrahim
Britney Spears continues to reclaim her life, gets engaged to Sam Asghari
By Kara Weisenstein
The bittersweet success of 'Shang-Chi' after a year of pandemic-fueled Asian hate
By Brandon Yu
Stay up to date