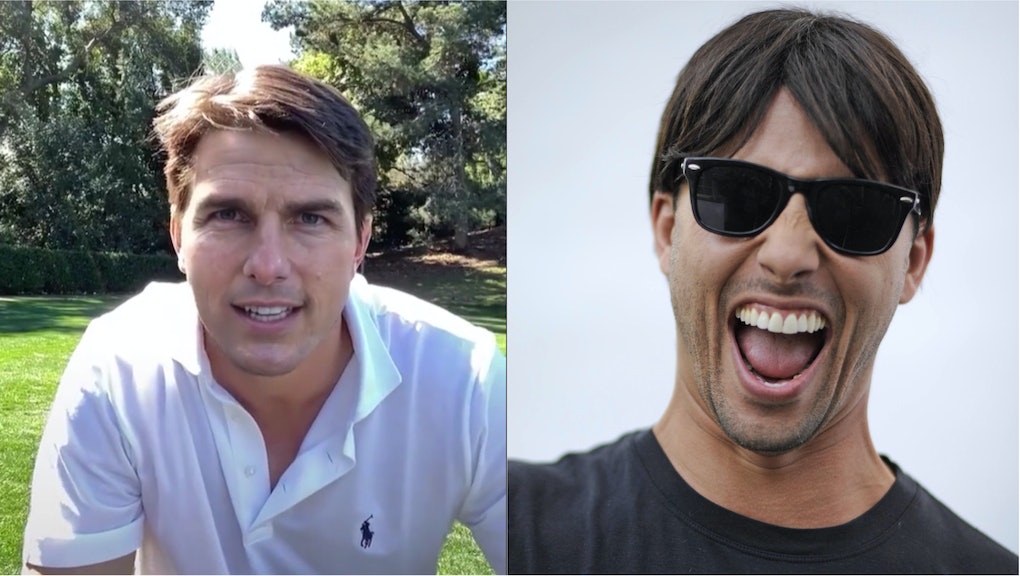 With your sound off and limited familiarity of his golf swing, the Tom Cruise deepfakes taking TikTok by storm are convincing enough. There he is at the tee, stumbling in a hallway, and performing a magic trick — with the trademark scrunched-face laughter and off-center incisors, to match a suitably realistic haircut. Fire up the sound, and the voice isn’t quite there, but with a username like @deeptomcruise, it’s unlikely these were ever intended to mislead to such an extent. (Oh, but they have.)

The frighteningly uncanny facial impression of Cruise is a minor viral sensation, with one such video raking in more than 6 million views in three days. After seeing a few of these zip around the timeline, my first instinct was to call up another Tom Cruise impersonator, Evan Ferrante, who’s been featured on The Tonight Show with Jimmy Fallon, It’s Always Sunny in Philadelphia, and recently performed voice work for The Animaniacs.

To examine the trend and talk about the tough work of becoming the Mission Impossible actor, we spoke with the 41-year-old impersonator, who has the definitive take on the sprinting maniac. Operating as Not Tom Cruise, with a successful YouTube channel and Cameo profile (my first introduction to Ferrante, as an anniversary gift), he’s into his third decade of professionally donning the shaggy wig and black shades. Ferrante walked us through the nuances of celebrity impression deepfakes, the keys to a great Cruise impression, and an unlikely run-in with the man himself.

How long have you been working on your Tom Cruise impression?

I've been doing the Tom Cruise impersonation thing as a career since, roughly, 2004 or 2005 when YouTube and Funny or Die launched. I started putting up some videos. I was an actor prior to that, but I just didn't think the videos would lead to anything. One was just a montage of Tom Cruise's best performances, without a wig and glasses — it was really just about my acting, my impersonation. And it was in commemoration of him and Katie Holmes tying the knot, right after he jumped on the couch on Oprah. I thought it would be the opportune time in the zeitgeist to exploit that.

He’s just a very excitable, energetic character. I really need to be in the right headspace and have enough cups of coffee and stimuli to properly function as Tom Cruise.

Viral wasn't even a word back then, other than having a virus or bacterial infection. That did very well and then got the attention of my friend in high school — a director named Richie Keen (Fist Fight, It’s Always Sunny in Philadelphia). And they had an idea for a series called “Tom Cruise Is a Cockblock.” That video spawned a trilogy because it was so successful on Funny or Die, and reached immortal status within a week — which is a high mark for that site.

There are other lookalikes out there that do cosplay work — there’s a guy now, a terrific actor, who’s recently got some acclaim, because he’s using the very advanced deepfake software. He's an accomplished actor in his own right, but he tends to look like Tom Cruise a little bit more. He doesn't really have the voice down, but he's got the look. It really transforms him into an imperceptible kind of illusion of Tom Cruise.

The actor you alluded to is the same one going viral on TikTok right now?

Yeah, his name is Miles Fisher. He’s been on Mad Men, some other TV shows, Final Destination. He’s an actor I admire, and did a great Christian Bale a number of years ago.

I've also been using deepfakes, working with the best people in the industry doing it, from Collider TV and Corridor Digital to just individuals who work with software and are the go-to technicians out there. But this one is getting a lot of acclaim, because again, the technology just keeps getting better and better. People are drawn to illusion and people are drawn to lookalikes for some reason, because people like to be fooled or question things.

What, to you, are the most important elements to dial down for a Tom Cruise impersonation?

I would say the most important aspects are going from laughter to being really serious in an instant, also the pregnant pause Tom Cruise has, where he’s like [switches to Cruise voice in Jerry Maguire] “Put me on the line with Bob Sugar” — of course, his big smile, his laugh, his woos. He’s just a very excitable, energetic character, so channeling that energy is something that I've had to work very hard in doing and I can't really do it sustainably for very long. It requires a great deal of energy. So I really need to be in the right headspace and have enough cups of coffee and stimuli to properly function as Tom Cruise.

From the looks of your website, you actually got to meet him at one point. How did that happen?

We met each other at the Chateau Marmont one evening, I think back in 2015, I think it was in November. We met at 2 in the morning in the lobby of the hotel. I tried to buy a bottle of champagne, prior to that, a few hours earlier in the garden, when we were both having dinner. I was having drinks with my friends and he was having dinner with a hodgepodge of celebrities — Jeremy Renner, people from The Office, Zero Dark Thirty — a big gathering of writers, directors, producers. I tried to buy a bottle of champagne, thinking it'd be a nice way to commemorate our meeting. And I was shot down immediately by the waiter, who said that I’d be banned for life, and he’d be fired, and it just wouldn’t happen. I was resigned to the fact that I’d just be breathing the same oxygen as him, two ships passing in the night. But my girlfriend at the time said there’s no way in hell we’re leaving tonight without meeting him.

As the night goes on, I'm a little bit drunk, I’m tipsy. I was very happy I was just in the same room with him. But everyone leaves the garden except for my friend and my friend gets a phone call. He gets a phone call from my girlfriend who went to the bathroom, since my phone was dead. And he says to me, Tom Cruise is waiting for you in the lobby. So I get out of my chair, knowing that he's telling the truth, and sprint from the garden shop to the lobby and Tom Cruise is waiting for me there. He does a slow turn, always in slow motion to me. And we embrace one another, and shake each other, and we say it’s an honor and privilege to meet you. We took a great picture together — he was wearing platforms, since he’s a little bit taller than me in the picture. Jeremy Renner was standing right behind him.

The deepfake works wonderfully when there’s an impersonator underneath who can bring the deepfake or the character to life underneath it.

You’ve described deepfakes as an enhancement to your impression, and it kind of edits out your original facial expressions. So are there some ways this works like autotune, where a layperson might not understand the nuances to mastering it?

There’s a spectrum with regard to the quality of deepfakes. And again, the deepfake works wonderfully when there’s an impersonator underneath who can bring the deepfake or the character to life underneath it. Anyone can wear a deepfake mask — you, myself, my mother — could wear a Tom Cruise mask. Doesn’t mean it will be any good, it just means the technology will map it onto whoever wears the mask.

Also, age has a lot to do with it, the way your body moves, your mannerisms. So, for instance, the movie The Irishman got a lot of criticism, because you had older actors wearing a young deepfake mask. There was a disconnect because you were watching an older actor move in the mask, and it didn’t really work. There was a disconnect when Robert De Niro was beating someone up as only a 70-something man would beat somebody up.

People are skeptical of deepfakes for political reasons, but also perhaps for taking away work for real-life impersonators. Do you worry it might remove the novelty for career impersonators?

It’s an interesting question because a lot of people don’t care. It’s a testament — look, Miles’s video is excellent — to how viral and popular something’s become simply because it meets the criteria of fooling someone based on technological prowess and style over substance. Now it's all about the substance, in my opinion, but these days substance means far less than it used to.

Is it crucial that you nail his facial quirks when you’re filming, or can they edit it in afterwards?

It’s really not. If I were to explore deepfake and make it pretty imperceptible or perfect, I could probably figure out what facial expressions I would absolutely need to make it stronger. The software is so good that it merges his facial expressions with mine. If I open my mouth up too much using the Impressions app, it doesn’t work as well and the lighting has to be great. But when I’m working with a professional team, using top-of-the-line software and 4K cameras, I don’t have to worry about it too much.

In Miles’s recent videos, are there any tics or body language that don’t square with Cruise that you’ve picked up over the years?

Honestly, I think we do similar things — and I’m not going to say anything bad about his impression. He does a very good impression, but the voice isn’t quite there and is a giveaway for me. He’s got the perfect Tom Cruise hair, and the energy and the pauses down and the laugh. Again, it’s not a Tom-petition, I always say when people talk to me about other impersonators.