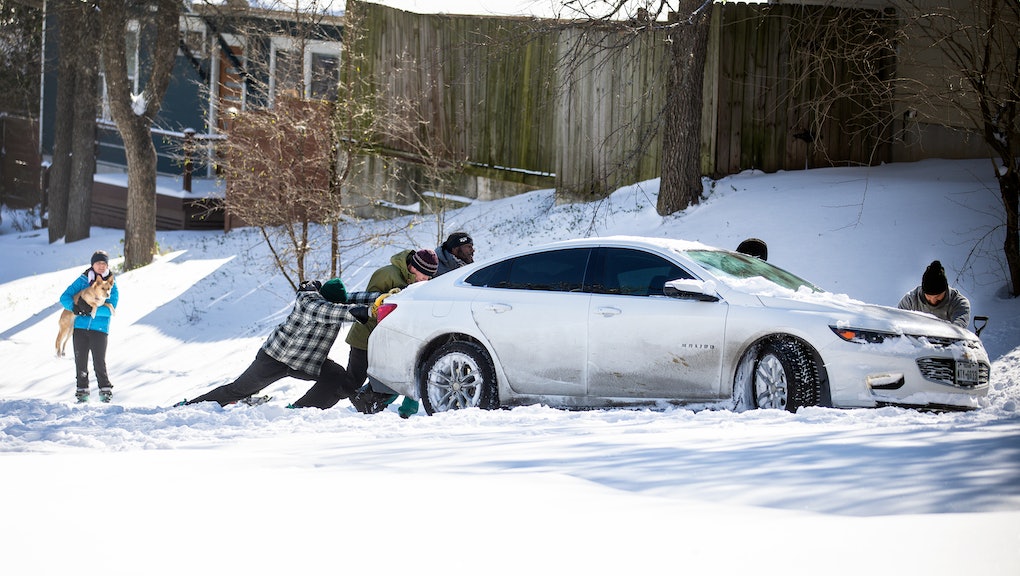 There was a "snownado" in Texas, in case you're wondering how climate change is going

Conditions became dire over the weekend in Texas, where an unprecedented wave of winter weather has crashed upon the typically warm state. Power outages have left millions stranded in record-low temperatures with little to do but wait for the cold spell to pass. A snowstorm in Texas is evidence enough of the extreme weather that climate change can bring, but nature appeared intent on really hammering home the point, so it unleashed one other weather rarity: a "snownado." It's enough to make you think the planet just might be trying to send a message.

J.D. Miles, a news reporter for local affiliate CBS11 in Dallas, Texas, drew attention to the bizarre weather event on Monday, sharing footage that the station received from residents. The clips showed glimpses of the snownado, which appeared over Cedar Creek Lake in East Texas. According to Miles, the small waterspout made its way over land and water and kept spinning for several minutes before it disappeared.

Snownados, otherwise known as snow devils, are exceptionally rare occurrences that appear when surface winds generate a vortex over the top of snow cover, creating a spinning column of snow. They usually form over lakes and are created when warm air causes the snow or ice caught up in the gusts to create steam. Cooler air above the vortex can cause the column to rotate, creating a sort of a snowy whirlwind.

While the snownado didn't cause any damage during its short appearance, it's indicative of just how unusual the weather is in Texas right now. Houston experienced a record cold temperature of 17 degrees Monday, well below its average temperature this time of year, which is around 65 degrees. Some parts of the state recorded temperatures on Monday that were colder than the weather in Anchorage, Alaska. The effects on the state's infrastructure have been devastating: Major highways across the state shut down entirely, leaving many people stranded, while rolling power outages caused by freezing gas pipes have left millions without heat or electricity.

It's hard to blame Texas for these outcomes. The state never assumed that it would experience such a widespread, ongoing cold spell, and its infrastructure simply was not built to withstand these types of temperatures. But the sad fact is these weather events are becoming more and more common, and climate change is to thank.

There's a tired joke that Republicans and climate change deniers lean on when unseasonably cold weather rears its head: "So much for global warming, huh?" What they miss is that these extreme stretches of cold and snow are in fact proof of concept. The planet is warming, and that results in more extreme weather swings — not just extreme heat. Recent studies published in Nature Communications and Nature Geoscience found that as the planet continues to warm, North America can expect increasingly harsh winters, with cold air from the Arctic carried farther and farther south, affecting states that otherwise wouldn't typically feel the full effects of the cold spells.

It’s time for states like Texas to recognize the reality of climate change. That will be a major climb, seeing as Texas Gov. Greg Abbott (R) just announced his intention to introduce a bill that would blacklist businesses that won’t work with fossil fuel companies. Failure to act could result in Texas becoming a “snownado alley” — and that is a fate that the state’s infrastructure is not prepared to survive.