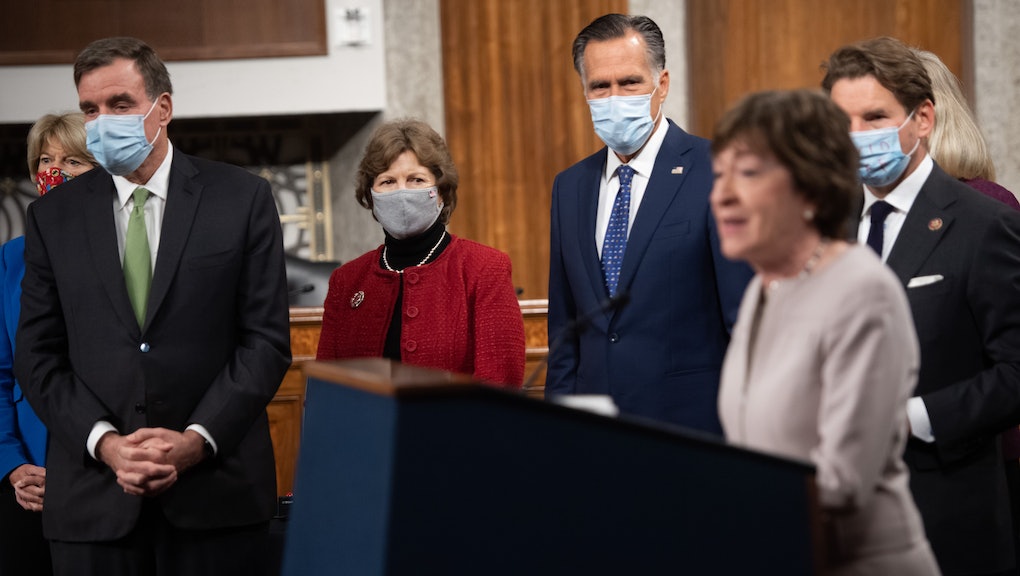 It's Dec. 1, which means that the federal government has 11 days to pass a coronavirus relief package before lawmakers head home for the holidays. And finally, after months of waiting on the congressional follow-up to March's $2 trillion CARES Act, legislators from both sides of the aisle and both sides of Capitol Hill are floating new proposal to offer Americans some relief.

West Virginia Democratic Sen. Joe Manchin told reporters Tuesday in a press conference what is easily the most obvious statement of the year: "We're going through the most difficult time that I believe we've ever had." To cushion this "most difficult time," the $908 billion bipartisan package calls for a number of proposals that both Republicans and Democrats have been angling for, though the total cost is much closer to the funding ceiling of $500 billion favored by Senate Majority Leader Mitch McConnell than it is the original $3 trillion proposal put forth by Democrats.

Despite the fact that the U.S. will soon see its 270,000th coronavirus-related death, even some senators who co-sponsored the bill still see government overspending as a central concern. "It's simply unacceptable for us to not respond in this circumstance," said Sen. Mitt Romney (R-Utah) during the press conference. "Now, I happen to be a deficit hawk. I don't like borrowing money, I don't like spending money we don't have. But the time to borrow money, maybe the only time to borrow money, is when there's a crisis."

According to Politico, "The proposal includes $160 billion in state and local aid, $180 billion in additional unemployment insurance and $288 billion for small businesses. It also has $82 billion for schools as well as $45 billion for transportation, according to a draft, and it includes money for health care." Some of the small business aid includes methods similar to the Paycheck Protection Program (PPP) loans provided earlier this year. Additionally, the legislation outlines $180 billion for a supplemental unemployment benefit of $300 per week through March 2021, per CNBC; the government expanded the unemployment benefit earlier this year but let it expire over the summer. And critically, the legislation allocates $16 billion for distribution of a forthcoming vaccine.

Treasury Secretary Steven Mnuchin has worked with House Speaker Nancy Pelosi (D-Calif.) for much of this year on a relief package before conversations conversations stalled in late October. According to Politico, the secretary was involved in these latest conversations and told reporters of the proposal, "I appreciate that there is some bipartisan support."

Democrats won't like that the legislation would shield companies from coronavirus-related lawsuits for a certain period of time until states come up with their own laws around liability, or the fact that the proposal does not include a direct cash payment to Americans. But Democrats are also in a tricky position: If they push back on this compromise legislation, it could further delay much-needed aid. (Of course, the same could be said for Romney-style Republicans who object to more generous relief bills because of the price tag.)

It should be noted, however, that despite the calls for bipartisanship and decorous refusal to place blame, the Democrat-led House of Representatives passed a follow up to the CARES Act back in May. The HEROES Act would have provided $3 trillion in coronavirus aid and prevented needless death, but McConnell refused to bring the bill to the Senate floor for a vote. There's also another big caveat: This compromise plan exists, but per Politico the text isn't finalized and there's been no commitment yet that it'll be brought to a vote in the House or Senate.

As the country's hospitals buckle under the pressure of this latest coronavirus surge, it's odd that it's just becoming clear to legislators that U.S. residents might need support — and fast. It's also still up for debate whether or not this legislation will pass: As Mic reported in November of a coronavirus relief package, "At this point, anything is better than nothing — though officials don't seem to think of it that way."