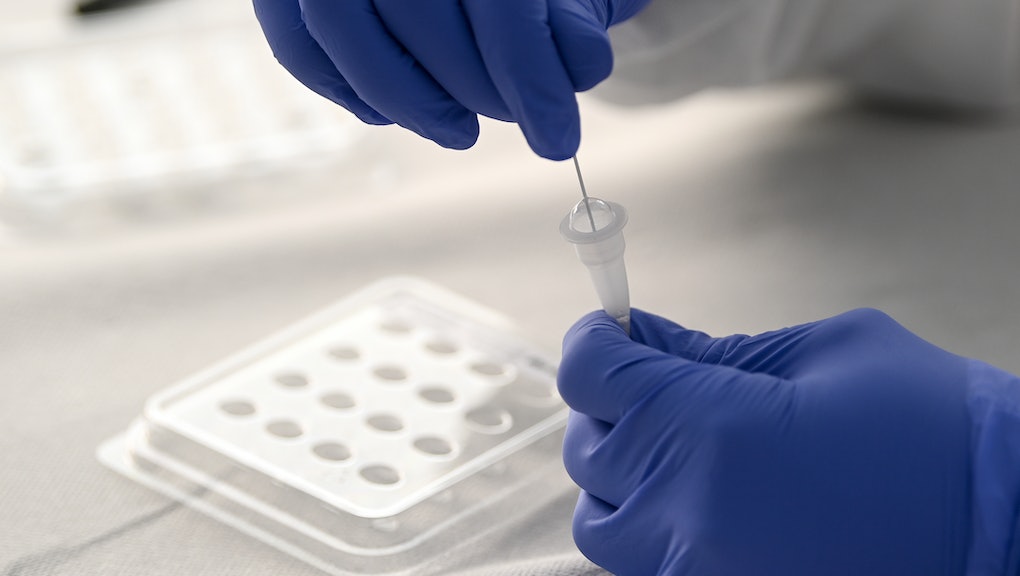 More than one year into the COVID-19 pandemic, we're pretty used to grim headlines. But while one of the most recent projections is sobering, it also shows glimmers of hope. On Tuesday, experts predicted that the highly contagious B.1.1.7 variant could trigger a surge in the coming weeks but likely fall in the summer, CNN reported. And if we continue with vaccinations and safety protocols, we can help curb that surge.

The SARS-CoV-2 variants that have emerged in recent months could complicate how the pandemic plays out. These include three that the CDC has highlighted as especially concerning, given that they seem to spread more easily than others. Specifically, the B.1.1.7 variant that was first detected in the U.K. might fuel a bigger wave in the spring than experts previously predicted. "But I still do suspect that things will be brought under control in the summer, and there will be very little virus circulating," Trevor Bedford, of the University of Washington and the Fred Hutchinson Cancer Research Center, said in a briefing, per CNN.

The expected surge underscores the need to vaccinate as many people as possible. Around 44.5 million people in the U.S. have gotten at least their first dose, according to the most recent CDC data, while more than 19.8 million, or about 6% of the country’s population, have received both.

Efforts to expand vaccination efforts are underway, though. The New York Times reported that the Food and Drug Administration (FDA) plans to greenlight a request from Pfizer and BioNTech to store their vaccine at standard freezer temperatures — higher than the ultra-cold conditions currently required —which could make it possible to open up more vaccination sites. Per CNN, distribution would also be less of a logistical headache.

Meanwhile, Pfizer and Moderna have both committed to collectively making 220 million doses of their vaccines available to ship by the end of March, according to CNN. Johnson & Johnson, which is expected to receive an emergency use authorization from the FDA for its single-dose vaccine, has promised to make 20 million doses available, also by late March.

The Biden administration is gearing up for a rollout of 3 to 4 million doses of the Johnson & Johnson vaccine next week, White House COVID-19 response coordinator Jeff Zients told CNN. He noted that the COVID-19 vaccine dose allotment to states and retail pharmacies will also get a big boost — from 8.6 million doses in January to 14.5 million doses this week.

Meanwhile, the University of Massachusetts’s Reich Lab COVID-19 Forecast Hub predicts that the U.S. will have about 7,922 COVID-19 fatalities in the third week of March, the lowest since the first week of November, Bloomberg reported.

But despite these encouraging developments, we can’t drop the ball on the usual precautions, like mask-wearing and social distancing. As CNN noted, these preventative measures can help decrease the virus’s spread, as well as its chances of mutating along the way.

Researchers from the University of California, Scripps Research Institute and the University of Arizona have found that the B.1.1.7 variant increases transmission rates by 35% to 45%, doubling cases every week and a half, per The Harvard Gazette, making these precautions all the more crucial. So far, the variant has been detected in 30 states, and the CDC projects it will emerge as the dominant strain in March. University of California, San Francisco researchers have found that the variant has been rising in prevalence in California, accounting for a larger fraction of virus samples collected there.

Two studies suggest B.1.1.7 might also cause more serious disease — but before you panic, know that, as CNN reported, the research is preliminary, hasn’t been peer-reviewed, and requires further investigation.

We seem to have reached an inflection point in the pandemic — but we can’t afford to let our guard down now. If we stay masked up and socially distanced, and get ourselves and our loved ones vaccinated when it's possible, we just might have a lit summer to look forward to — or at least a somewhat more “normal” one than the last.