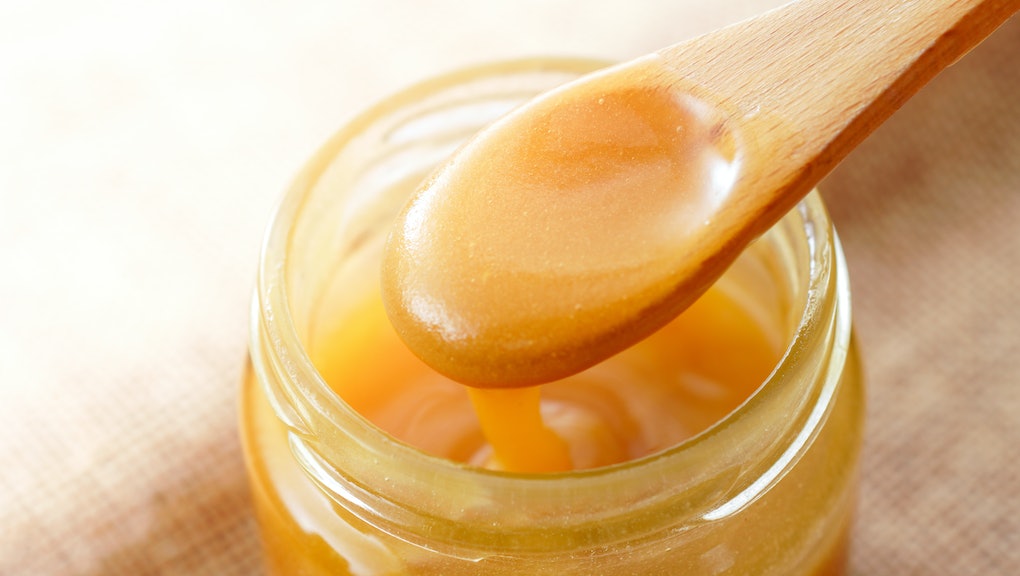 These benefits of Manuka honey are actually backed by science

For the past decade or so, everyone’s been really into Manuka honey. As hipster culture permeates every wellness thing out there, people all over the country (many of whom aren’t even sure what makes it unique) have become obsessed. At $30 and up per bottle, it’s been lauded as everything from a skin treatment miracle to a cancer deterrent. Perhaps the wildest thing about Manuka honey besides its price is that unlike other passing health fads, this one actually has old-school science to back up its reputation as liquid gold. Here’s the deal with everything you want to know about the benefits of Manuka honey.

How is Manuka honey different than regular honey?

Manuka honey hails from the Southern Hemisphere, specifically from New Zealand and Australia. It’s created by bees that collect nectar from the flowers of the Leptospermum scoparium tree, also known as the tea tree. Sumerian tablets dating back to 2100 B.C. make reference to the medicinal uses of honey for wound care.

All honey contains hydrogen peroxide which has long been used as a disinfectant, fighting off harmful bacteria including E. coli, staph, and even MRSA — a particularly nasty antibiotic resistant bacteria that can lead to blood infections, pneumonia, and even sepsis. What differentiates Manuka honey, though, from your average honey-in-a-bear-bottle is that it contains a significantly larger amount of an organic compound called methylgloxal (MGO), which is known for its unique antibacterial effects. The honey is also believed to have antiviral, anti-inflammatory, and antioxidant benefits.

A 2018 study showed that the MGO present in Manuka honey acts as an additional antibacterial agent when used for skin healing. Its viscosity also creates a thicker barrier between the wound and the external environment as well as preventing tissue damage by reducing inflammation and increasing oxygenation. There’s also evidence that using Manuka honey can be effective in treating burns, healing skin ulcers, and preventing scars. It was approved as a wound treatment by the FDA in 2014, so the stuff has indeed endured.

In 2019, you can buy a sprawling array of over-the-counter Manuka honey wound gels, creams, and patches everywhere from your local naturopath to Target.

What if my skin isn’t injured, just irritated or acne-riddled?

Manuka honey has become a key ingredient in skin products claiming to offer relief from conditions like acne, rosacea, and eczema in addition to acting as a basic skin moisturizer. The claims of the curative powers of Manuka honey for troubled skin are no joke, says Dr. Natalie Yin, an assistant professor of dermatology at Columbia University Medical Center. “Manuka honey can have many beneficial effects on the skin,” Yin adds. “Firstly, it can act as an antibacterial agent to fight and destroy bacteria. Its anti-inflammatory properties can also help to decrease inflammation and redness in the skin. Together, these properties make it useful as a natural, adjuvant treatment for both acne and wounds. Furthermore, Manuka honey is great for hydration and moisturization.”

Dr. Sarina Elmariah — a dermatologist, assistant professor of dermatology at Mass General Hospital, and board advisor at Evereden skin products — says her patients use Manuka for a host of skin issues. “It has been shown to have antimicrobial activity against many types of bacteria that can exacerbate skin diseases like eczema, acne/rosacea and skin wounds/ulcers,” says Elmariah. “There is less data out there in terms of randomized controlled trials for other skin conditions but many case reports, including my own patients, who like it for rosacea.”

My problems are more than just skin deep. Can Manuka honey do anything for my stomach?

Manuka honey has become the new go-to natural treatment for digestive issues because of its ability to kill Helicobacter pylori (H. pylori) bacteria which can cause a host of gastrointestinal issues including gastritis, ulcers, bloating and is linked to a rare stomach cancer called MALT lymphoma. Small and developing research has shown Manuka honey to be effective in fighting H. pylori in gastritis, peptic ulcers, and even cancer in lab studies.

While the antibacterial properties of Manuka honey are well-established, those claiming that it’s an effective treatment for serious digestive illnesses need a gut check, says Dr. Rabia De Latour, gastroenterologist and assistant professor of medicine at NYU Langone Health. “If someone has H. pylori, they’re treated with an antibiotic cocktail for 10-14 days. This is standard of care. No study to date has proven honey can eradicate H. pylori, so I wouldn’t sell it as a bona fide preventative tool for gastric MALT lymphoma or H. pylori infection.”

Just for a little context, the CDC estimates that two-thirds of the world’s population has H. pylori infection. While most cases occur in developing countries, 30-40% of Americans will experience H. pylori infections at some point. “Honey is a great sugar substitute and if you do have H. pylori it certainly will only help, not hurt,” says De LaTour. “It can impair the bacteria, but it cannot completely eradicate it on its own, which is the goal when you’re treating a H. pylori in a patient’s stomach.”

And will it do anything for my teeth?

There have been multiple studies showing that the antimicrobial powers of consuming Manuka honey substantially reduce dental plaque and gingivitis and improve the hardness of tooth enamel. One study, which had participants chomp on a specially designed chewable Manuka honey leather three times a day, showed that it reduced plaque by more than 30% over a three week period.

So should I just order a vat of this stuff on Amazon and prepare to live forever with the skin of a god?

Here’s where things get sticky (sorry, had to). Not all Manuka honey is created equal. Since Manuka has taken off as a global health trend, there are concerns about the purity levels for those looking to produce and sell it en masse.

In December 2017, New Zealand’s Ministry for Primary Industries (MPI) introduced new regulations that a product must meet in order to be certified as authentic New Zealand Manuka honey. The honey must be tested in an MPI-approved laboratory which tests for MGO levels to bear the authentic Manuka stamp of approval from the New Zealand government. There are four chemical attributes and one DNA marker that Manuka needs to meet to pass the test.

A recent investigation by Good Morning America showed that only two of the five brands they tested met the actual requirements for legit Manuka. Consumers concerned about buying a bogus honeypot should look for New Zealand’s UMF stamp of approval or look up the product on their Unique Manuka Factor Honey Association website.

More like this
This anti-vaxx doctor is seriously telling lawmakers vaccinated people are "magnetized"
By Tracey Anne Duncan
Magic mushrooms could treat depression better than some medications, a new study suggests
By Melissa Pandika
Why the origin of coronavirus is still a mystery
By Marilyn J. Roossinck
Stay up to date