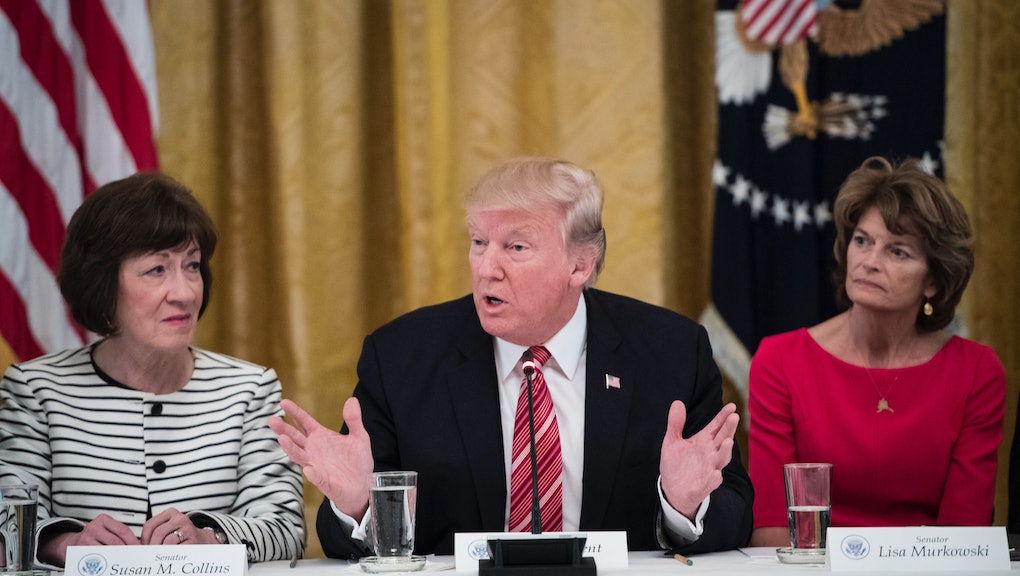 With a Senate — and country — divided, it's the moderate Republicans who could control the impeachment trial of President Trump and how it all plays out. From calling witnesses to seeing evidence, the Senate sets the rules and votes on how to proceed throughout the trial. It takes a simple majority to set the trial's rules, which means the 47 senators who caucus with the Democrats will need four Republicans at minimum to join them. It just so happens that there are three solid possibilities — and one more to keep an eye on.

Senate Majority Leader Mitch McConnell has proposed rules for the impeachment proceedings, but the majority leader has been open in declaring that he's working with Trump's team to make this trial end as quickly as possible, and ideally in the president's favor. Democrats have pushed back on the rules, which allow for a vote on new witnesses and information-gathering only after opening arguments and questioning has been completed by both sides. Senate Minority Leader Chuck Schumer said there are "many flaws in this deeply unfair proposal."

But to change these proposed rules, and in order to have a say throughout the rest of the proceedings, Democrats need Republicans to follow the oath of impartial justice they swore last week and commit to hearing a full trial of the charges. On Tuesday, the impeachment trial began in earnest, and the first thing on the docket was a debate over the rules of the proceedings. Here are the four Republicans who are most likely to give the Democrats a win.

Sen. Susan Collins is back in the moderate spotlight. She's long been described as a moderate Republican, and her vote against Trump's attempted Obamacare repeal neatly fits into that mold. But during the contentious confirmation hearings for Supreme Court Justice Brett Kavanaugh. Democrats had hoped she would vote against Kavanaugh's confirmation; instead, she delivered a fiery speech decrying the treatment of Kavanaugh and then voted to confirm him. When she did so, it made her 2020 re-election battle a lot more difficult, with several efforts to oust her sprouting up. With the impeachment trial now underway, all eyes are on her once again.

Collins told The New York Times that "it is likely that I would vote to have more information brought forward, whether witnesses or documents or both," which breaks with many Republicans who think the trial should move forward with only the material that was presented in the House. Her office did not respond to a request for comment from Mic.

But when it comes to actual removal, her vote is truly up in the air. She criticized McConnell for stating that he was working in "total coordination" with the White House, but she has not made her opinion on whether she thinks Trump should be removed from office known — for a reason.

"It is inappropriate, in my judgment, for senators on either side of the aisle to prejudge the evidence before they have heard what is presented to us because the each of us will take an oath, an oath that I take very seriously, to render impartial justice," she told Maine Public Radio. She told the Times that she would be "applying the same standard" as she did during President Bill Clinton's impeachment trial, when she voted to acquit Clinton.

Sen. Lisa Murkowski is another lawmaker often touted as one of the few Republican "moderates," and her vote was also of intense interest during the Kavanaugh hearings. Though she planned to vote against his nomination, the centrist Republican ultimately ended up voting "present" in order to pair her vote with an absent senator who was attending his daughter's wedding and would have voted to confirm him.

Murkowski, like Collins, criticized McConnell for saying he was coordinating with the White House on the impeachment trial. "In fairness, when I heard that I was disturbed," she told Anchorage NBC affiliate KTUU, adding that "we have to take that step back from being hand in glove with the defense."

In recent days, Murkowski has indicated that she is going into the impeachment process "without any preconceived outcomes." She told the Anchorage Daily News that she would vote with Republicans to hold off on determining whether witnesses should be called to testify until after opening arguments and questioning had been completed by both sides. But, she said, if she determines later in the process that she needs more information, she would vote to hear from witnesses or obtain new evidence, even if Republicans as a whole do not want to. She plans to "listen fairly to both sides of the matter," she said. Her office did not respond to a request for comment from Mic.

Sen. Mitt Romney has been one of the few Republicans who have expressed intense criticism of the allegations that led to Trump's impeachment in the House. In October, he tweeted, "By all appearances, the president’s brazen and unprecedented appeal to China and to Ukraine to investigate Joe Biden is wrong and appalling."

Since then, Romney has indicated that he would love to hear from Trump's former national security adviser John Bolton, whom many Democrats want to testify during the Senate trial.

"He has first-hand information," Romney said, adding, "I'd like to hear what he knows." Romney has additionally said that he would like to have the ability to hear from other witnesses and consider additional evidence if necessary. His team did not respond to a comment request from Mic.

In a statement Tuesday, Romney said: "These allegations demand that the Senate put political biases aside, and make good faith efforts to listen to arguments from both sides and thoroughly review facts and evidence."

He added that impeachment is difficult and divisive. "I have spent — and will continue to spend — many hours in careful deliberation about what this process and its potential outcomes could mean for our country," he said. "The best we in the Senate can do is strive to meet the obligations outlined by our founding fathers — to honor our constitutional duty and fulfill our oath to do impartial justice."

Sen. Lamar Alexander, who is not exactly a "moderate" but is not seeking re-election this year, is, as Politico noted, unique in that he's respected across the aisle and close with both McConnell and Schumer.

With Collins, Murkowski, and Romney expressing their desire for a full trial and a willingness to call witnesses, that would leave Alexander as the fourth Republican that Democrats need to help shape the way the trial in the Senate goes down. And even if he doesn't necessarily agree with impeachment to begin with, he's stated that he is committed to his duty to "hear the arguments on both sides." In a break with McConnell's preferences, that includes an openness to gathering additional information.

"It was a mistake for the House to impeach President Trump just as an election for the people to decide whether they approve of his behavior is coming, and the Iowa caucus is just a few days away," Alexander said in a statement sent to Mic. "But once the House impeaches the president, we have a constitutional duty to respond. And to me, that means, No. 1, hear the case, not dismiss it summarily; No. 2, ask our questions; and No. 3, be guaranteed a right to vote on whether we need additional information such as documents or witnesses."

More like this
Brace yourselves, folks: Trump's MAGA rallies are coming back
By Rafi Schwartz
Please, someone explain these psychotic pants to me
By Rafi Schwartz
The real reasons employees aren't rushing back to work
By Noah Berlatsky
Stay up to date