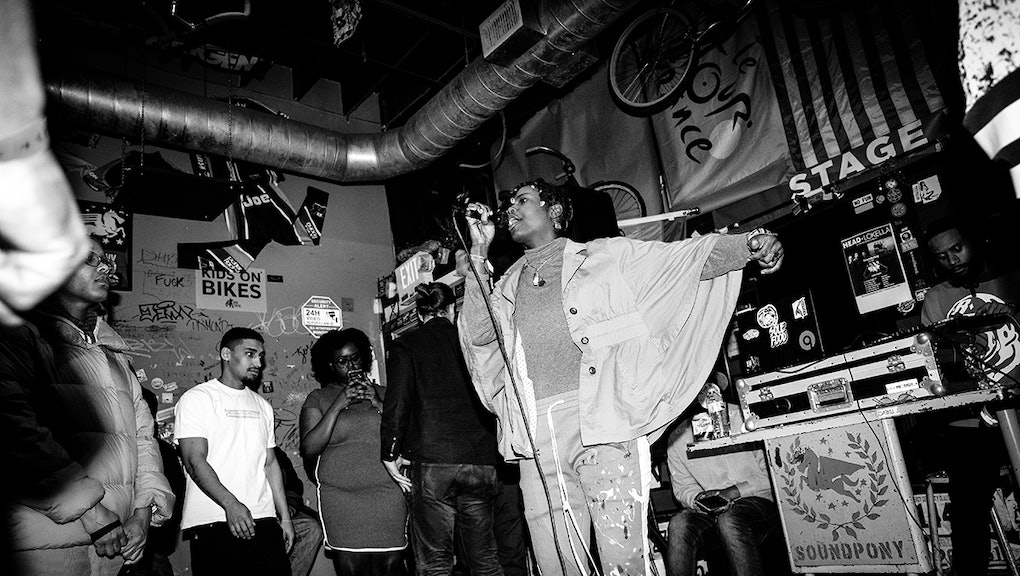 In March, nearly 50 Oklahoma rap artists made the Tulsa mansion of Klu Klux Klan member, W. Tate Brady their makeshift studio. It was a twisted, though fitting, juxtaposition. The group of artists, all of whom are Black, used The Brady Mansion— now owned by former NFL player Felix Jones — to record Fire in Little Africa, a collaborative project commemorating the centennial of the Black Wall Street massacre. During one session, a rapper references the event, flipping the scenery on its head. “Took a hundred years, but we here.”

Something frustratingly forgotten in most history books, Tulsa's Greenwood District, once known as Black Wall Street, was home to a profound and unique form of Black prosperity into the 1920s. The region was home to numerous Black-owned establishments that managed to generate independent wealth within the district. Of course, this made neighboring white residents angry. On May 30th, 1921, tensions came to a head as a resident shoeshiner, Dick Rowland, accompanied a 17-year old white elevator operator, Sarah Page, in the Drexel building. The doors of the elevator closed and Page let out a scream, effectively framing Rowland for assault.

A confrontation between Black and white Tulsa residents ensued in front of a downtown courthouse where Rowland was jailed, but things devolved into violence quickly. Shots rang out in front of the courthouse, and two Blacks and ten white people were killed—prompting the complete destruction of Greenwood by white Tulsa residents in retaliation. Lasting for 16 hours, the massacre included the burning of thousands of residences and numerous businesses, obliterated by gunfire, arson and bombings. One of the massacre’s organizers was W. Tate Brady.

Steph Simon, rapper and executive producer of Fire in Little Africa, touches on recording the album in The Brady Mansion. “Where you can really feel the [bad] energy is the third floor, that’s where all the holding cells were and that’s where [Brady] kept and hid people. You can just feel it, you can damn near hear it,” he said. "We’re working on getting the bad energy out and we’ve been saging, but despite [the energy], we’re rebranding the culture. Anybody that wants to help this side of Tulsa that’s always been treated like a third-world country, that’s what we’re about.”

The Black Wall Street massacre has become an increasingly prevalent cultural touchstone. HBO's highly imaginative revamp of the Watchmen comics uses the oft-forgotten moment as its jumping off point. The president's upcoming visit to Tulsa — originally slated for Juneteenth no less — brought the issue to the public consciousness even further. But during a tour of the Greenwood District, there’s an eerie quietude that hushes the neighborhood’s history. The nearby Greenwood Cultural Center is seldom visited, though it houses artifacts and published content about Black Wall Street. A list of insurance losses —amounting to $2.7 million dollars — is highlighted in the center’s lobby, one of many debts following the massacre that went unpaid.

Black Tulsa residents weren’t ever given the space to heal, or vent their rightful anger about the massacre. Instead, many avoided speaking about the massacre altogether. Teachers even refrained from educating students about Black Wall Street. Rapper Dialtone, who attended middle school with Steph Simon, recalls approaching older family members to speak about Black Wall Street, as he felt shunned from the truth. “It made me hate everybody. Recently, talking to my grandmother, [she] said there was a time in Tulsa when they [weren’t] even supposed to talk about it. Our older generation would shut you down,” he said.

Simon agrees, noting that Tulsa politicians would have likely concealed the massacre if they could. “I remember when we couldn’t come outside because there was a KKK rally downtown. I feel like my ancestors pulled some strings to where [Black Wall Street] is getting more exposure, so to speak,” he said. “I want reparations and I want to heal, but over the years of relearning [Black Wall Street], the content that we’re pushing is very spiritual and very entrepreneurial.”

Stevie “Dr. View” Johnson, Ph.D, a fellow executive producer of Fire in Little Africa, was invited to become the Manager of Educational Outreach at the Woodie Guthrie Center, pitching the album’s idea as a commemoration of Black Wall Street for 2021. “I never asked for this music stuff, it was more so I was asked to come to Tulsa. I knew I didn’t want to be a traditional scholar or an administrator, I wanted to be in the community,” he said. “In my mind, i’m like, ‘this sounds great, but what does a 30 year-old hip-hop scholar [have] to do with Woody Guthrie?’ I couldn’t make the connection, but everything I’ve been in my life I’ve learned to trust the process.”

That process led him into taking notes from the Revenge of the Dreamers, the J. Cole-led collective project with his label, Dreamville and various featured artists. As 150-plus guests held sessions with Dreamville within ten days, the idea prompted Dr. View to follow suit. “When I look at Revenge of the Dreamers, these [artists] are already established, they have the access, they’ve [already] built their reputations and they were making music for fun. For us, we’re coming into this situation to save Black humanity through hip-hop, not just in Tulsa — we’re looking at other Black Wall Streets,” he said. “We have people and resources to tell the story unapologetically. For me, coming into this, it’s a legacy project. This is bigger than rap, this is bigger than production, it’s about us being about to go into different spaces and not be afraid to tell [our story] the way we want to tell it.”

As hip-hop creates a landscape of free expression and edification, the genre gives Tulsa — especially Greenwood—an identity that was nearly lost. After Black Wall Street was destroyed, residents didn’t wait for reparations, but instead rebuilt their land, a resilience that introduced a self-sufficient perspective to the town. For those featured on Fire in Little Africa, the goal is greater than individual wants — 100 years later, there’s a willingness and humility to reviltilate the spirit of Black Wall Street.

“Hip-hop is modern-day folk music. Folk music has always been the music of the poor and the dispossessed,” said Damion Shade, artist and Criminal Justice Policy Analyst at Oklahoma Policy Institute. “When you think about what was happening in Oklahoma in the late 19th century, you’re looking at something that’s analogous of what we see in so many Black communities right now; people who have little [are] finding ways to take that and create a community with it, where dollars circulate over and over again amongst people who value each other like family.”