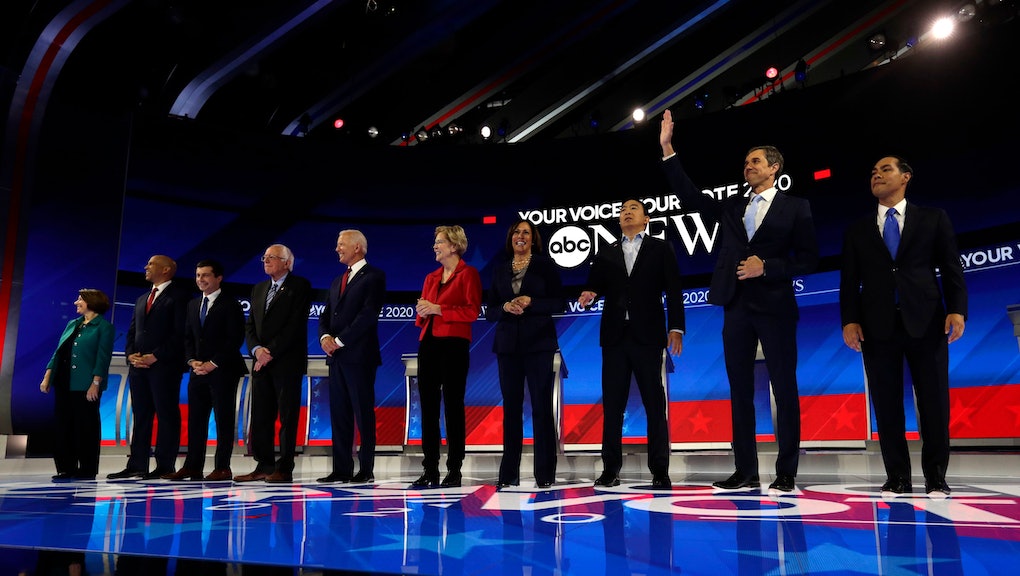 Third Democratic debate: Who won, who did just enough, and who fell short

As a political communications professional who has run numerous debate prep sessions, I can tell you this: Any debate including 10 candidates is more of a joint press conference than a policy debate.

They are, however, the only debates we have.

These showdowns most definitely have winners, though the victors are very rarely the candidate with the soundest arguments. The winner is instead the candidate who successfully uses the live event to unveil a compelling new message that will be played on news networks and social media loops for the next few days.

I've worked in campaign communications for years, most recently for Rep. Lauren Underwood's victorious 2018 campaign. I've also served in the Obama administration and worked on President Obama's team in 2008. Every time I watch a debate, I know what must have gone on behind the scenes in hours and hours of debate prep sessions, and I keep all the key tenets of campaign messaging in mind.

In my view, the winner of Thursday's Democratic debate — the third go-round of the primary season — was clearly former Texas Rep. Beto O’Rourke. But how did the rest of the field fare? Below, I grade the candidates on who accomplished what they needed to in order to stay in the race, and who did not.

Beto O’ Rourke: To "win" a debate really means two things: the candidate won the news cycle, and the candidate will probably raise a bunch of money off their performance. O’Rourke’s campaign for the presidency has completely transformed since the murders in the Texas cities of El Paso, Midland, and Odessa, the first of which is O'Rourke's hometown.

Team Beto claims that they don’t have a pollster on staff, but I only started believing them recently. I do not believe O’Rourke is going to be elected president, damned if he's not changing the race. His call for assault weapon buybacks will no doubt alarm many conservative Americans; indeed, he’s already received a Twitter death threat from a Texas lawmaker.

If the buyback proposal wasn’t provocative enough — especially for a Texan — O’Rourke also called explicitly for reparations for slavery, saying unequivocally that he would sign a reparations bill once in office. He has clearly stopped trying to carve out a political space for himself in this race, instead opting to follow his instincts.

Also: Did you notice how at least half of the Democratic field took a moment to fawn over O'Rourke after he gave impassioned answers invoking the gun violence in El Paso? I would not be surprised if he snuck onto the Democrats' presidential ticket as someone's veep.

Did what they needed to do, but nothing more

Elizabeth Warren: Warren did an excellent job of bringing all of her answers back to her core message: corruption in Washington. Her answers on climate change, gun violence, and health care all tied neatly into her overall stance that the existing process on Capitol Hill is broken, and radical but reasonable change is needed to get things done. That the Massachusetts progressive could make that case across a variety of the issues most important to Democrats is a lesson in effective political messaging, and all candidates could learn a thing or two from the senator's discipline.

Bernie Sanders: Sanders did what he needed to do for his base, but he didn’t gain any ground Thursday. The media is absolutely itching for a fight between Sanders and Warren — who are polling nearly neck-and-neck in the race behind Joe Biden — but the ABC moderators mostly refrained from manufacturing conflict between them Thursday in Houston.

As a communications professional, I have to note that Sanders' style is ... bold. He makes his statements forcefully, and he often gesticulates aggressively while speaking. His shock-white fly-away hairs have made headlines all their own.

That said: What the Vermont senator has in spades is authenticity. And authenticity is perhaps the most valuable asset a candidate can have. Sanders was, as ever, his authentic self Thursday, and that's exactly why his support remains solid.

Pete Buttigieg: Pete Buttieg is a supremely talented communicator. As someone who traffics in rhetoric, I’m rather in awe of him. He had many great moments in this debate, and his argument against Medicare-for-All, summarized by his line, “I trust the American people to make the right choice for them," is a truly excellent talking point.

The Buttigieg die-hards will remain die-hards, and the South Bend mayor will no doubt be able to fundraise off of this performance. I look forward to the debate when the more liberal wing of the party (Warren, Sanders) finally get into a real policy debate with Mayor Pete. Whether he can stand up to more direct scrutiny of his moderate stances remains to be seen. That said, while I don't think he'll be leading a ticket come 2020, this is another candidate I would not be surprised to see in the VP slot.

Kamala Harris: Using her opening minutes to address President Trump directly was a phenomenal choice for the California senator. I think a lot of her success thus far is due to Democrats’ deep desire to see her actually indict Trump, and she often talks about "prosecuting the case" against the president.

Harris also appeared to have thought deliberately about her presentation on stage, especially as someone known more for her fierce grilling in the Senate chamber than anything else: She laughed and played the peacemaker while still embodying the role of capable prosecutor. That's why she is my 2020 dark horse — I don’t see an obvious path to victory for her, but I also don’t doubt that she can create one.

Cory Booker: Booker did everything right Thursday, but he still has not carved out a place for himself in this race. The New Jersey senator has often called for party unity and positivity, and he repeated the phrase “common cause, common purpose,” a few times, but that message just doesn’t evoke much. I don’t doubt his sincerity, but from a communications standpoint he is failing to connect (and it shows in the polls).

Joe Biden: I admire Biden immensely, and I think he served well as vice president. That said, Biden has not been particularly impressive in the debates. He has run for president three times now and has made unforced errors each time. This cycle, it's his habit of gaffes that's been most scrutinized, though his treatment of women has been called into question as well. We did, however, see a glimpse of why President Obama tapped him as his running mate during the foreign policy section of the debate, where Biden showed a fluency on the matter that hasn't really been seen from the other candidates so far.

Julián Castro: Castro came into this debate knowing he had to be on the attack, but he went a bit overboard. Biden is the frontrunner in the polls, so it makes sense that an outlier like Castro tried to knock him down a peg. But the former housing secretary's attacks came across as overly aggressive and borderline rude. Those are the clips that will be played over and over again for Castro for the next 24-48 hours — and that's not a good thing.

Castro had better moments later in the debate, and in general, he comes across as an inspiring, trustworthy person. He also made a point to speak some of his lines directly to the camera, which was extremely effective. A tip of the hat to whichever staff member told him to do that.

Amy Klobuchar: Those party moderates who love Klobuchar will continue to love Klobuchar, but the Minnesota senator needed to do better tonight to make a splash with a wider audience. I imagine she was trying to come across as “the adult in the room,” but Harris did it better. She has already qualified for the fourth debate in October, but I don’t see her staying in the race for long.

Andrew Yang: I was so ready for Yang’s surprise, which was heavily teased by his campaign before the debate but turned out to be a possibly legally troublesome letdown. We already knew that the tech entrepreneur, who's built his entire candidacy around a universal basic income, has been giving away “freedom dividends” of $1,000 to supporters around the country. He told us so on the New York Times podcast The Daily. Yang was out of his depth on a number of issues, and he was particularly unprepared for the foreign policy questions.

He also continued his penchant for a more casual look at the debate, opting for a shirt with no tie, but one flag pin. That said, the Yang Gang remains impressive with their enthusiasm.

More like this
Biden's pledges aren't enough to avoid the worst effects of climate change, new study says
By AJ Dellinger
Marjorie Taylor Greene and her team are just openly accosting people in Congress now
By Rafi Schwartz
Buckle up: The investigation into the Jan. 6 insurrection is just getting started
By Rafi Schwartz
Stay up to date