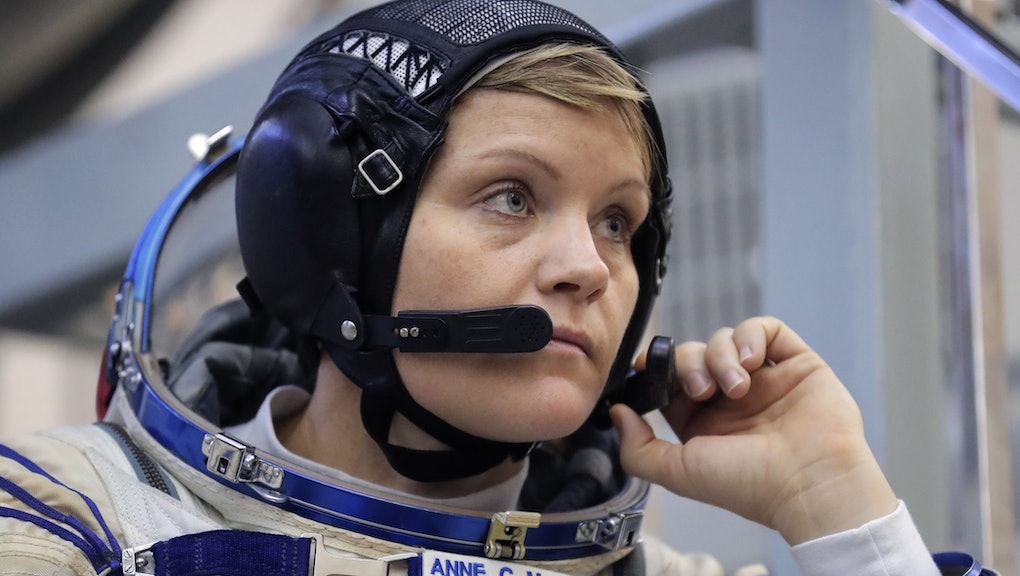 Anne McClain was supposed to be part of the first all-female spacewalk. Now she's known for possibly stealing her ex's identity from space.

The astronaut’s estranged wife, former Air Force intelligence officer Summer Worden, alleged McClain was improperly accessing her bank accounts and knew personal details about Worden’s recent spending. The couple had been embroiled in bitter divorce proceedings for the better part of a year.

Worden put her spy skills to use: she asked her bank for the IP addresses of devices that had recently accessed her accounts using her username and password. The bank said one computer was registered to NASA — orbiting the Earth some 254 miles above the heads of Worden and her four-year-old son in their Kansas home.

So the former NSA employee filed a complaint with the FTC, and her family filed one with NASA’s Office of Inspector General, accusing McClain of identity theft. The astronaut is back on the ground now, after a six-month stint on the ISS, and “is totally cooperating,” according to her lawyer, Rusty Hardin. “She strenuously denies that she did anything improper.”

McClain seems honest and reliable. The New York Times reported that despite her ongoing personal troubles, the Spokane, WA-born astronaut portrayed no outward signs of turmoil on the space station. She is a graduate of West Point and an acclaimed leader with a decorated past. She flew more than 800 combat hours in Operation Iraqi Freedom and was recruited by NASA in 2013. McClain basically sounds like the IRL Carol Danvers.

But McClain and Worden were embroiled in an ongoing dispute over custody of Worden’s son, born about a year before the two women met. In a 2018 hearing at a Houston area family court 8, McClain asked a judge to grant her parenting rights and exclusive rights to decide where the boy lived. She alleged Worden had an explosive temper and made poor financial decisions. McClain also posted now-deleted photos of herself and the child to her Twitter account. The caption read, “The hardest part about training for space is the 4 yr old I have to leave behind every time I walk out the door.”

The more we go out there and spend time out there, all the things we do here are going to happen in space.

The astronaut contended she’d been checking the family’s finances were in order, as she’d always done with Worden’s permission. Worden felt otherwise, arguing the insight into her personal spending was privacy theft, despite the fact that no money had been moved.

Experts think McClain may go down in history for being the first person to maybe commit a crime in space. But legal jurisdiction in the vast ether beyond Earth is fuzzy. Not unlike maritime law. “The more we go out there and spend time out there, all the things we do here are going to happen in space,” Mark Sundahl, director of the Global Space Law Center at Cleveland State University, told the Times.

Before this story broke, Stars and Stripes reported that McClain is on a list of candidates NASA is considering to be the first woman on the moon. It’d be a first for womankind and especially fitting after the organization scrapped her spacewalk because they forgot to pack two woman-sized spacesuits.

This drama is another example of the lengths women — female astronauts, in particular — may be willing to go for love. Don’t forget the story of the astronaut who drove from Florida to Houston in a diaper so she wouldn’t have to waste time at rest stops. This fall, the tale of Lisa Nowak and her affair with fellow astronaut William Oefelein will be immortalized on celluloid. Natalie Portman is playing her in the movie Lucy in the Sky, out this October.

More like this
Miss Papua New Guinea's TikTok twerks aren't the problem — misogyny is
By Kara Weisenstein
Hollywood producer Scott Rudin allegedly "relished in the cruelty" of abusing staffers
By Kara Weisenstein
The U.S. is spending millions to develop a nuke-powered spaceship
By AJ Dellinger
Stay up to date