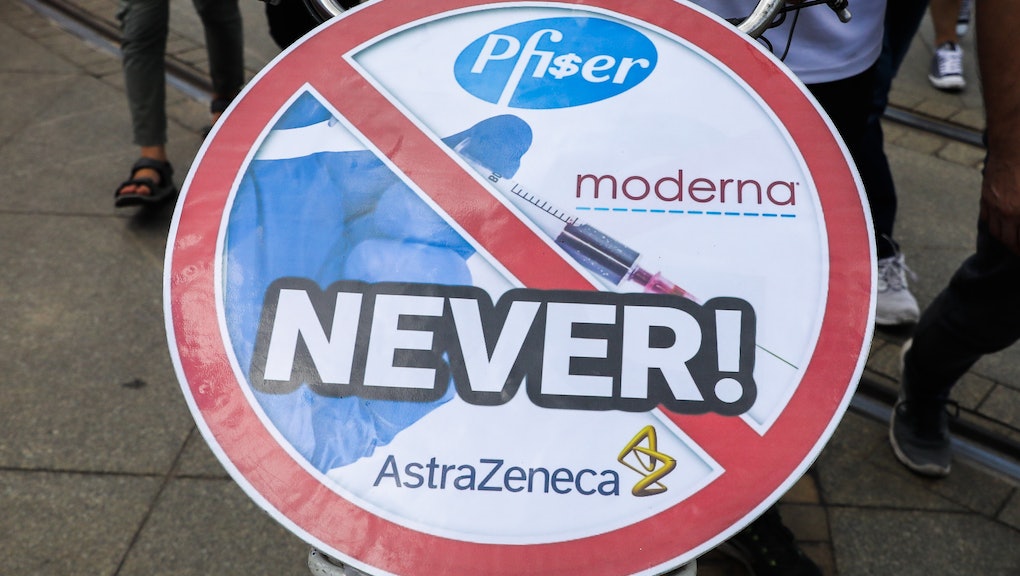 The anti-vaccine community, the people who are decidedly opposed to vaccines because of misinformation and conspiracy theories, are often looking for signs that they are being oppressed or discriminated against. That's how we end up with people like Charlie Kirk comparing vaccine requirements for students to apartheid, and Marjorie Taylor Greene comparing vaccine passports to the star of David used by Nazis to identify Jewish people. So when some anti-vaxxers spotted a website that was offering cash rewards to people who turned in their unvaccinated friends, family members, and neighbors, they flipped out. Posts poured in on social media calling the site "communist" and claimed it was creating a "dystopian hell."

The Anonymous Unvaccinated Reporting System, or AURS, popped up online on July 31 of this year, according to WhoIs records that track website domain registrations. An archived version of the website shows that it was purportedly started by Doctor Jonathan Morse and Professor Brad Webber, who were supposedly working to create an "anti-vax" registry for the government to use. They would do this by encouraging people to anonymously submit reports about people who have not yet received the coronavirus vaccine. In exchange for providing this information, submitters would be entered into "monthly sweepstakes" where they could be rewarded with up to $2,500.

The prospect of this system had anti-vaxxers up in arms. "Still under the delusion that we are not living in some Orwellian dystopian nightmare? I give you the Anonymous Unvaccinated Reporting System," one person on Twitter wrote. "If you do not push back on outright tyranny like this, it will only continue to grow out of control." A link to the site was shared more than 800 times on Facebook, according to VICE — mostly from people raising the alarm about the frightening prospect of being snitched on. Videos made the rounds on TikTok, and anti-vaxxers used the occasion to highlight how the government is oppressing them. The site reportedly received more than 300,000 visitors in its first week of operation — enough to crash the servers and bring the site down.

As it turns out, the website is not actually a database to track the unvaccinated, nor is it the project of doctors or medical professionals. Instead, it was a work of satire created by David Bramante, a realtor and Republican candidate running for governor of California. The AURS website now redirects to Bramante's own site, where he explains the project and what he hoped to accomplish with it.

According to Bramante, the site was created "to help wake people up to the threats on our civil liberties." He claims, "We’re not far from this company being a reality," and "sadly, many of our family, friends and neighbors would be ok with AURS because they don’t realize where things are leading."

That doesn't exactly seem to be the case, though, by Bramante's own account. He says that the site received more than 2,000 submissions while it was up and operational. "90% of those entries are scathing form entries saying how much AURS is wrong," he explains. That doesn't seem to square with the idea that people are totally cool with the idea.

The AURS experiment is telling, though not in the way that Bramante intended. It shows how misguided many in the anti-vaccine movement are. A satirical site, which could pretty easily be debunked as fake, spread as if it was a real sign of government crackdown. Instead of being held up as an example of how misinformation spreads, it is instead being promoted by Bramante as an example of how dystopian things could be. Except they aren't. The fact that it seemed like it could be real in the minds of those who are already prone to conspiratorial thinking mattered more than recognizing that same conspiratorial thinking led to them believing a work of fiction was reality. Welcome to the feedback loop.

More like this
Biden's new office to fight for environmental justice already faces an uphill battle
By AJ Dellinger
There are QAnon NFTs now, because one grift deserves another
By AJ Dellinger
Scientists are potty-training cows in an effort to save the planet
By AJ Dellinger
Stay up to date