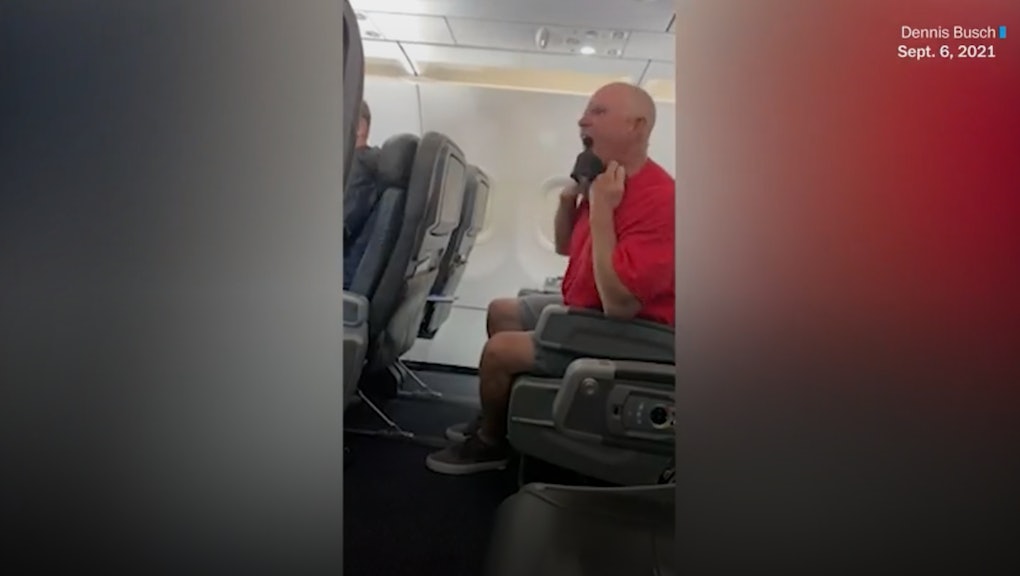 During the past year or so, we’ve seen anti-maskers lose their shit and descend into unnecessary anarchy: from licking store windows to raw-dog coughing on people at supermarkets, their misinformed rage seems to know no bounds. On Monday, a whole new standard was set when a 61-year-old man named Tim Armstrong, growled at staff on a flight, reportedly hurled anti-Asian insults at two passengers, and just basically flipped out in a very alarming way. Watching the video will prompt the most decent of us to wonder about his mental health — but he was allegedly just very intoxicated, which might explain the pretend-eating of his own mask in some sort of belligerent protest against “the establishment.”

The entire ordeal happened during an American Airlines flight that was headed from L.A. to Salt Lake City. While still in the air, Armstrong appeared to think that the plane had landed and stood up to begin de-boarding. He then yelled at the crew to let him off and began to scream at passengers.

“Joe Biden, really?” Armstrong said, when a flight crew asked him to sit down, according to the Washington Post. Yes, I was perplexed at that as well. But I suppose hurling our president's name as an insult of sorts is something anti-maskers do now? Armstrong then stumbled back to his seat, where the aforementioned growling and mask-chewing ensued. The chilling video has now gone viral.

The image of a grown flight passenger acting like a rabid Chow Chow is terrifying — some of the passengers’ expressions confirm this. According to Dennis Busch, the passenger who captured cellphone footage of the ordeal, the crew instructed passengers to ignore Armstrong. At one point, Busch says that Armstrong approached two Asian passengers and harassed them before his growling outburst. “He started saying that wasn’t their seat, that they didn’t belong there,” Busch told FOX 11 News L.A. “It was very uncomfortable.”

Once the plane landed, Armstrong was escorted out by police as passengers applauded. He was cited with public intoxication and disorderly conduct before he was taken to the hospital. This is just the latest in a dramatic spike of unruly passengers on airplanes since the start of the pandemic. This year, there have been 4,184 reports of misbehaving air travelers; out of those, 3,057 were mask-related, according to the Federal Aviation Administration (FAA).

It’s no wonder that hundreds of flight attendants are now taking self-defense classes as more and more people choose to disrespect the mask mandates set by law. In some instances, confrontations with anti-maskers have even turned violent. I hope that some of these people learn to stay their asses home, because traveling is already stressful enough — even when you’re not getting snarled at.