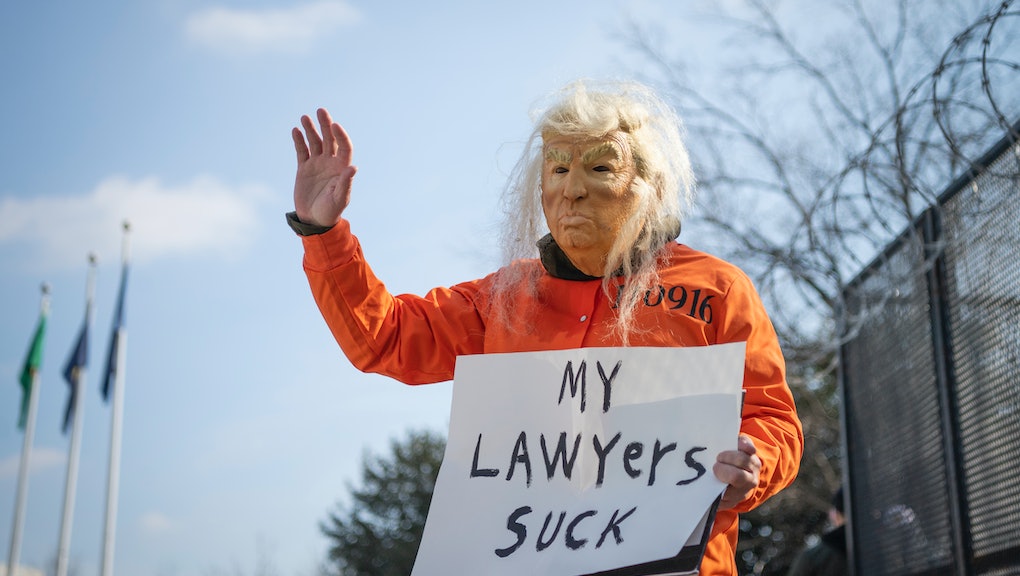 This impeachment is a lot of things, but mostly it's just depressing as hell

I've lived through three presidential impeachment trials during my short time on this ridiculous planet. One was over a blow job (acquittal); one was over an obvious attempt to strongarm an ally nation into interfering in domestic affairs (acquittal); and now, for the past day and a half, I've been watching House Democrats make an articulate, impassioned, and deeply investigated case into why former President Donald Trump should be held accountable for the attempted coup at the US. Capitol on Jan. 6.

Unlike the previous two impeachment trials, this one feels different. It feels more open and shut. More airtight. More iron clad. The evidence is just too clear and visible. Which is why, above all else, it all feels incredibly depressing.

Truthfully, it's hard to put my finger on what's so dispiriting about watching the Democrats' impeachment managers take the Senate jurors (and, vicariously, the country as a whole) through Trump's actions — starting this past spring and continuing through the two months after Election Day — that led to a MAGA insurrection that left five people dead and hundreds injured. I'm sure some of it has something to do with the residual trauma of being forced to relive the former president's deranged rhetoric while knowing exactly how it all turns out. And I'd guess it also stems in no small part from the psychic blunt force trauma that comes from having months' worth of proto-fascist incitement condensed into an easily digested series of PowerPoint slides and video clips.

But more than anything else, Trump's second impeachment trial feels like a depressing slog thanks to the yawning chasm between the obviousness of his guilt and the inevitability of his acquittal.

There is simply no way a straightforward, rational, honest assessment of the facts here could reach any other conclusion than that Donald Trump is 100% responsible for inciting a riot that threatened the lives of lawmakers and risked toppling our political power structure as a whole. His role was impossible to deny while it was happening in realtime, and it's just as impossible to deny when it's been stripped of the chaos and confusion of the day and laid bare in a sequence of simple, objective facts, which is what the Democrats have done from the moment the trial began.

But we're not dealing with straightforward, rational, honest actors here. Instead, we're dealing with career politicians who have pinned their reputations, and professional futures, on staying in the good graces of the malignant MAGA wing of the Republican Party. We already know Trump is going to be acquitted — 45 Republican senators told us as much before the trial even started. So instead, anyone not blinded by political ambition or unhinged conspiracy-mongers is stuck watching clips of unassailable proof of Trump's guilt while marinating in the infuriating sense of impotence that comes with knowing it's not gonna make a lick of goddamned difference.

It's that inevitable helplessness and hopelessness — compounded by the effort of having to go through the necessary motions — that's so disheartening. Would a conviction likely change much in terms of Donald Trump's day-to-day existence? I doubt it. He'd still be an unfathomably wealthy man living in luxury at one of his many, many private resorts. But at least a guilty verdict would mean that all this at least amounted to something other than a huge waste of time. Maybe he'd even be barred from threatening another run for president.

Instead, we're left unable to do anything except scream into the void as we watch this all play out in front of us. Just, it so reportedly happens, like Trump himself.