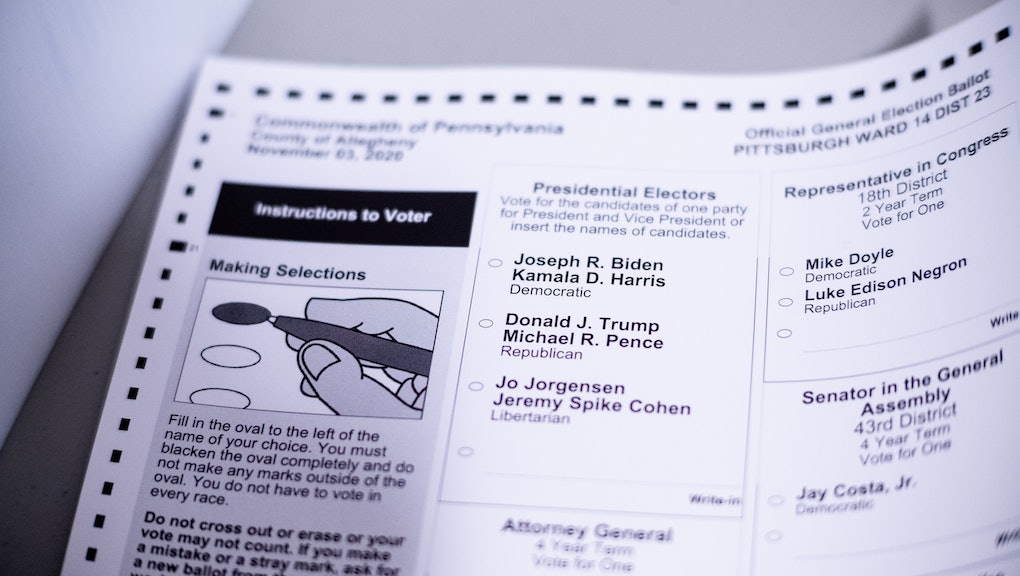 The GOP-led flood of lawsuits surrounding the election continues with Republican congressional candidate Kathy Barnette, who filed a lawsuit against a Pennsylvania county’s authorities Tuesday. As reported by The Washington Post, the lawsuit alleges that Montgomery County officials checked their district’s mail-in ballots for any technical errors or accidental defects that would prevent the ballots from being counted. Officials then contacted voters who’d made mistakes on their ballots and gave them the chance to correct it.

HuffPost’s Sara Boboltz reported that a common accidental error was that some voters forgot to include the “secrecy” sleeve that comes with mail-in ballots — an issue that the Pennsylvania Supreme Court recently ruled on. The state’s voters are required to use two separate envelopes when mailing their ballots: a secrecy envelope on the inside, and the outer no-postage-required return envelope. The state’s Supreme Court ruled in September that ballots that didn’t include the secrecy sleeve could be rejected by election officials, even if the ballot inside itself was filled out correctly.

According to Barnette’s lawsuit, the election officials who allowed voters to correct their ballots to ensure they’d be counted violated state election law and her own constitutional rights. Technically, officials aren’t allowed to start counting votes until 7 a.m. ET on Election Day, so Barnette argued that checking ballots for errors ahead of time counts as opening ballots early. Her lawsuit claims that at least 1,200 people submitted defective ballots, and Barnette wants them all thrown out.

Pennsylvania has been directly in the spotlight this election cycle. President Trump has been tweeting baseless voting conspiracies regularly, calling into question the legitimacy of mail-in voting (it's safe and secure) and claiming without evidence that mail-in ballots in the state will be full of inaccuracies. It’s also worth noting that while Pennsylvania has been known to lean Democratic during elections, thanks to its largely liberal major cities, Trump crucially won the state back in 2016 by just over 44,000 votes.

Meanwhile, late Tuesday, Republican Pennsylvania Rep. Mike Kelly launched a lawsuit alongside five other plaintiffs to disqualify yet more votes in the Quaker State. This time, the target was provisional ballots, which is a legal resource available to people to register their choice if anything about the voter's status is in question on Election Day.

Could this be a last-ditch effort by the Republican Party to cast even more doubt on this year’s results? Who knows. If the president wins, we probably won’t hear much from the GOP about all of the lawsuits and legal challenges they’ve levied against election officials in recent weeks. But if he loses, Pennsylvania will surely be one state (of many) that he’ll complain about.

More like this
Turns out trying to "release the Kraken" didn't work out so well for the pro-Trump lawyer team
By Rafi Schwartz
Texas Democrats are literally leaving the state to protest a GOP-backed voter suppression bill
By Rafi Schwartz
Nancy Pelosi took a stand on the Jan. 6 committee, and it left Republicans whiny as hell
By Rafi Schwartz
Stay up to date