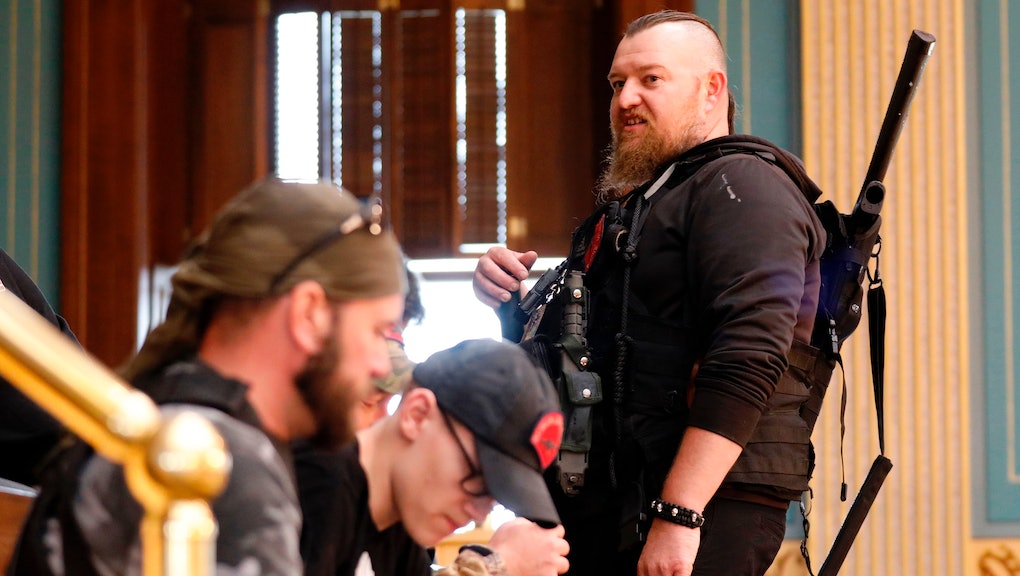 This Michigan sheriff offered a chillingly casual defense of the plot to kidnap Gov. Gretchen Whitmer

It's hard for me to say what is the most alarming part of this interview with Sheriff Dar Leaf, top lawman in western Michigan's Barry County, following this week's arrest of six militia members who allegedly plotted to kidnap Democratic Gov. Gretchen Whitmer as part of a "violent overthrow of certain government and law enforcement components."

Speaking with local Fox affiliate WXMI, Leaf — who in the spring said of Whitmer's coronavirus stay-at-home orders, "We’re kind of held hostage" — feigned ignorance about this week's sweeping FBI raids that turned some of his constituents in accused far right-wing conspirators. He told the station:

I haven't read everything up on it, I've got other duties to do, it wasn't our investigation. I was shocked, did not see this coming with those guys, but still we can't convict them in the media here, they do have a right to a fair trial.

But as it turns out, Leaf and William Null, one of the alleged plotters, have something of a history, after they appeared together onstage during an anti-Whitmer rally in May — something Leaf told the station he feels fine about. Because, as he explained to WXMI reporter Aaron Parseghian:

To be clear, this is a local law enforcement official appearing to casually offer a potential justification for people U.S. Attorney Andrew Birge described as "violent extremists" who tried to "target our duly elected leaders." The Republican leader of the Michigan state Senate also called the men "criminals and traitors."

But it gets so much worse than that. Because not only did Leaf simply muse about why this could just be a normal "arrest" instead of kidnapping, he went on to cite the specific state statute pertaining to citizens' arrests, and explicitly mentioned that a) government officials are indeed subject to that rule, and b) hey, he's not so convinced the FBI arrested the right guys in the first place.

The accused had, per the FBI, already purchased night vision goggles and a Taser as part of their alleged plan to take Whitmer across state lines in order to stand "trial." And though Leaf also expressed sympathy for Whitmer, the totality of his comments to WXMI are as terrifying as those made by President Trump on Thursday, when he offhandedly spoke out against the kidnapping plot, but only as part of a larger, much more pointed screed against Whitmer herself. Because unlike Trump, whose comments are almost always based on the simple political calculus of "will this help me?", Leaf is an actual law enforcement official tasked with protecting his immediate community. Instead, he seemed to not only tacitly endorse what can rightfully be called domestic terrorism, but indeed may have encouraged more of it by cloaking it in the obfuscating context of citizens' arrests.

Given Leaf's previous anti-Whitmer activism, the attitudes on display in his conversation with WXMI, and his alleged membership in the far-right, militia-aligned "constitutional sheriffs" movement — something he conveniently neglected to mention during his interview — it hardly seems surprising there were members of his community who felt empowered to begin plotting to do something about it. And that is terrifying.