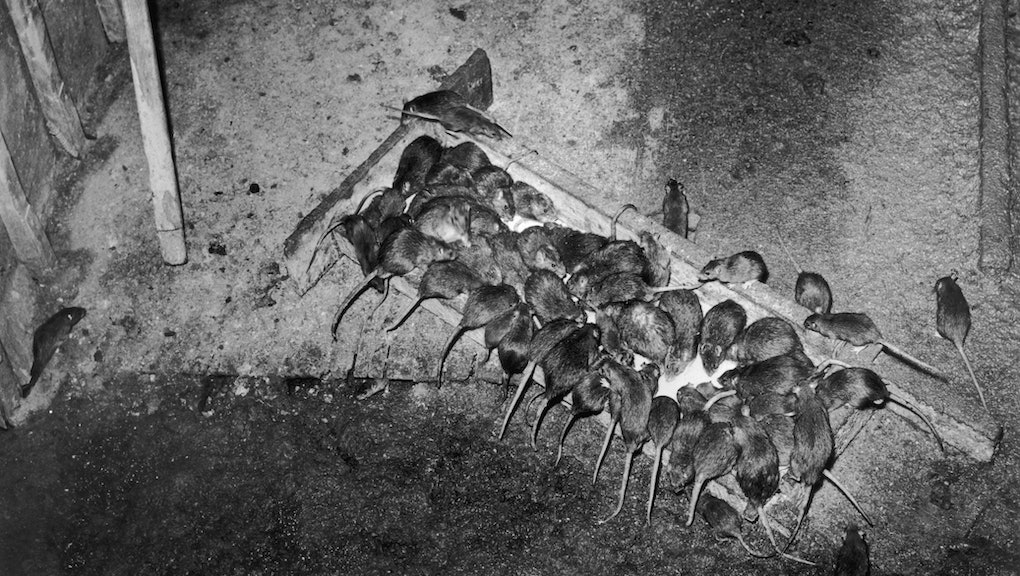 2020 incarnated itself on a New York City sidewalk this week when a skinkhole in the Bronx opened up and just straight up swallowed a 33-year-old man, dropping him 15 feet into the Earth and also a nest of rats. On October 26, Leonard Shoulders was waiting innocently at a bus stop, minding his own business, when the sidewalk suddenly collapsed. Surveillance video of the incident shows the man desperately clinging to the edge before succumbing to gravity, falling down the hole into the pits of underground New York.

"He went down feet first," Shoulders' mother, Cindy White, told News 4 New York in an interview. "He was just standing and the sidewalk just — it was like a suction. Like a sinkhole. He just went down."

Debris followed him down, adding insult to injury and hitting Shoulders in the head. According to his brother, Greg White, he also broke his arm and leg from the fall.

And then, reader, things really got bad.

As he lay there, paralyzed from the fall, onlookers waved down and called out to him. They asked Shoulders to wave back and shout if he was all right. He motioned to them, but kept his jaws clenched shut.

Why, you might be wondering, didn't he open his mouth to cry out for help?

"He couldn't move, and the rats were crawling all over him," his brother explained in terrifying detail to NY Daily News. "He didn't scream, because he didn't want the rats going into his mouth."

Nine words that should never be used to describe why a person chose not to open their mouth, and yet here we are. Only in New York, baby!

Shoulders' mother backed his brother's statement. "He was like, 'Ma, the rats down there were ridiculous,'" she said. "He was like, 'they were like so big.' He was scared to yell out because he thought they were gonna go in his mouth."

On top of everything, Shoulders was likely dealing with particularly aggressive rats. According to reports during the city's lockdown, the rodents have become bolder and angrier, going so far as to disturb outdoor diners and resort to cannibalism to get their meals as restaurant trash becomes a rare commodity.

In the end, it took 30 minutes to rescue Shoulders from his rat hole. The area has since been fenced off for safety, and investigators are looking into how the spot became so neglected and run down.

In the meantime, Shoulders' mother is just grateful this incident had a happy ending, all things considered.