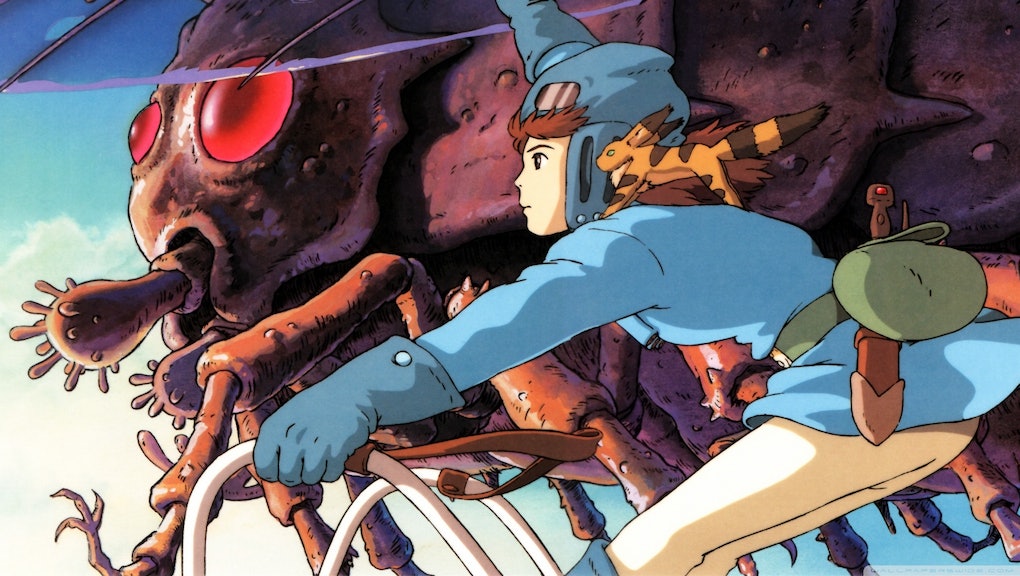 Thousands of years into the future, humans have ravaged the earth. The planet’s soil and water have long been polluted. From their toxic depths sprang a massive fungus jungle spewing poisonous gas, populated by gigantic man-eating bugs, which routinely attack and obliterate entire metropolises. The surviving humans have clustered into warring fiefdoms, which conquer one another in bloody quests for power and scarce resources.

We zoom in on a potentially grisly scene: one of the killer insects, a mammoth pillbug with dozens of glowing red eyes, called an Ohmu, is charging a wayward human who’s crossed its path. In swoops a redheaded princess on a sleek glider, who thwarts the bug not with guns or swords, but by charming it, calming it and luring it back towards the toxic jungle, its home. She’s Nausicaä, princess of the Valley of the Wind, a brave and whip smart young leader with a talent for communing with the natural world, even when it’s out to harm her.

Her tale, a quest to save her peaceful kingdom and stop the destruction of the planet, forms the basis of Hayao Miyazaki’s animated masterpiece Nausicaä of the Valley of the Wind from 1984. It’s one of the Japanese icon’s lesser-known films. You’re probably familiar with his better-known titles like Spirited Away, Howl’s Moving Castle or My Neighbor Totoro. But Nausicaä is a hidden gem that deserves revisiting right now — especially since it’s newly available on streaming, along with the rest of Miyazaki’s oeuvre, on HBO Max.

Nausicaä is a potent parable for lots of reasons: obviously, the climate change themes are incredibly timely. Humanity is at a pivotal moment in the race against global warming. The most optimistic scientists estimate we’ve got 30 years till the planet’s irreparably fucked; the most pessimistic among them give us under a decade to clean up our act before the world, quite literally, burns.

Nausicaä reminds me a tiny bit of 1992’s FernGully, about fairies living in the world’s last rainforest. They’re both animated films from a similar era, set in fantastical forests, touting a message of conservation. Imagine if humanity had taken climate change seriously — as seriously as we do now — “way back” in the 1980s and ‘90s. As future generations face the imminent prospect of a ravaged world, it’s a depressing alternate reality to think about.

Other Miyazaki movies, like Totoro or Kiki’s Delivery Service, are generally warm and fuzzy. They’re fantastical tales full of mystery and magic, but they generally revolve around themes of familial love and personal acceptance. Nausicaä is more in line with Miyazaki’s Princess Mononoke from 1997, about a wolf god and his human companion who seek to punish humans for ravaging nature. Both films are way grittier than Miyazaki’s other stuff. Nausicaä in particular has a really cool futuristic aesthetic you can see reflected in lots of contemporary sci-fi, like Mad Max or Rey’s storyline in the most recent Star Wars trilogy. Nausicaä itself was inspired by Frank Herbert's 1965 novel Dune, also set in the distant future amidst a feudal society.

In addition to conservationist, Miyazaki is famously a pacifist, and Nausicaä preaches a message of non-violence. One subplot of the movie involves a lethal, gargantuan humanoid bioweapon, a Giant Warrior, that the princess of another kingdom attempts to resurrect. According to the movie’s lore, the Giant Warriors scorched the planet a millennium ago during the Seven Days of Fire, the apocalyptic war that caused the Earth’s destruction. The fire-breathing giants are probably a metaphor for the atomic bomb, a threat that haunts the work of so many Japanese filmmakers and artists. Miyazaki smartly subverts normal action movie tropes by making pacifism his silver bullet, so to speak. In the story, violence results in everyone’s demise, but compassion holds the key to survival.