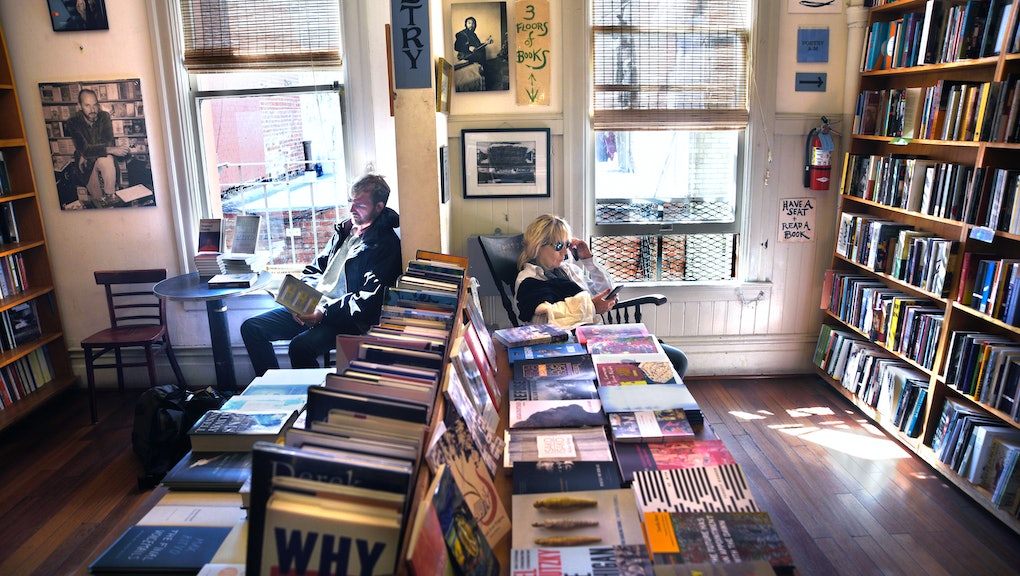 I’ve been diligent about buying books locally this year, particularly during the pandemic, which has been grueling on brick-and-mortar stores. But it’s a commitment that’s required patience, if I’m being real. When I recently ordered a few books from my local shop that I knew were on their shelves, it took like a week before I could pick them up curbside. I’m not complaining, really; I was happy to wait for my books if it meant supporting a beloved business. But I worried that other people might not be as stoic about the delay and opt to have their next pandemic read on their doorstep in two days, courtesy of Amazon.

That’s where Bookshop fits in. Launched just last January, the online bookstore seeks to be the indie alternative to Amazon, with a chunk of proceeds getting kicked back to small stores. Bookshop’s founder, Andy Hunter, is an indie literature guy himself, as the publisher of Catapult and the website Lit Hub. He figured taking back any market share from Amazon could be a windfall for small bookstores. After all, Jeff Bezos’s behemoth accounts for around 70 percent of online book sales and the pandemic has strengthened its dominance as world’s largest online retailer. Amazon made a whopping $75.5 billion last quarter, up 26 percent from the same time last year.

After nearly a year in business, Bookshop is doing remarkably well. Back in June, The New York Times reported the fledgling retailer was poised to blow past $40 million in sales in 2020 — a milestone Hunter didn’t expect to reach until 2022. According to the ticker on its homepage, Bookshop has siphoned more than $8 million to local bookstores. “There were a number of skeptics about whether this would work,” Bradley Graham, co-owner of Politics & Prose in Washington, DC, told the Times. “Bookshop has certainly worked better than anybody anticipated, because nobody anticipated a pandemic.”

It’s true: the entire industry has been upended by the pandemic, and Bookshop is probably lucky it launched when it did. By contrast, small bookstores are really, really struggling right now. The American Booksellers Association says an average of one bookshop is going out of business every week. While the media has painted the emergence of Bookshop as somewhat of a David and Goliath parable, I instinctively felt skeptical of whether an Amazon alternative could be as good for indies as it claimed to be. In these fraught times, wasn’t it more conscientious to order directly from the little guy, convenience be damned?

I called up one of my favorite shops in Brooklyn, Books Are Magic in Cobble Hill, to get their point-of-view. Colleen Callery, the store’s Marketing and Communication Manager, said they’ve made a “nice chunk of change” just from having an account with Bookshop. When shoppers choose to buy through Books Are Magic on the Bookshop platform, the small business gets 30% of the list price — less than they’d make from a direct sale, but without the hassle of fulfillment. Orders are shipped through Ingram, a large book distributor.

“Especially very early in the pandemic, when we weren't able to have more than like two or three people in the store to ship or package up any order, we were taking a long time” to fulfill orders, Callery told Mic. Having Bookshop to refer people to as a non-Amazon alternative was hugely helpful. “It’s not exactly the same as if we were able to sell things, but I think for stores that weren’t able to stay open, it probably made a big difference,” Callery said.

Aside from convenience, another chief reason people buy books from Amazon comes down to price, of course. But Jeff Bezos isn’t able to get you as good a deal as you might expect. Out of curiosity, I did a price comparison of five different books I really bought recently across Amazon, Bookshop, and my local indie retailer. The Amazon order was only roughly $15 cheaper. (Bookshop and buying IRL cost about the same.) But as Callery pointed out, “spending that extra $15 can really make all the difference” for a small business.

Amazon is devoid of the curation and personality that make bookstores so charming. “That’s why you get it so cheap, but there’s definitely a lot missing,” Callery affirmed. But Bookshop has worked hard to recreate the experience of browsing a brick-and-mortar store, discovering recommendations from real-life humans who love books. It’s not a replacement for these spaces, but at least as long as they’re sidelined, Bookshop offers a compelling alternative to Amazon. And as Callery put it, “thinking about these structures and who we’re actually supporting is really good for all of us.”

More like this
Did Ta-Nehisi Coates troll Jordan Peterson in his 'Captain America' comic?
By Kara Weisenstein
The long-awaited 'Zola' movie looks so, so good
By Kara Weisenstein
Choose-your-own erotica books let you customize your horniness
By Tracey Anne Duncan
Stay up to date