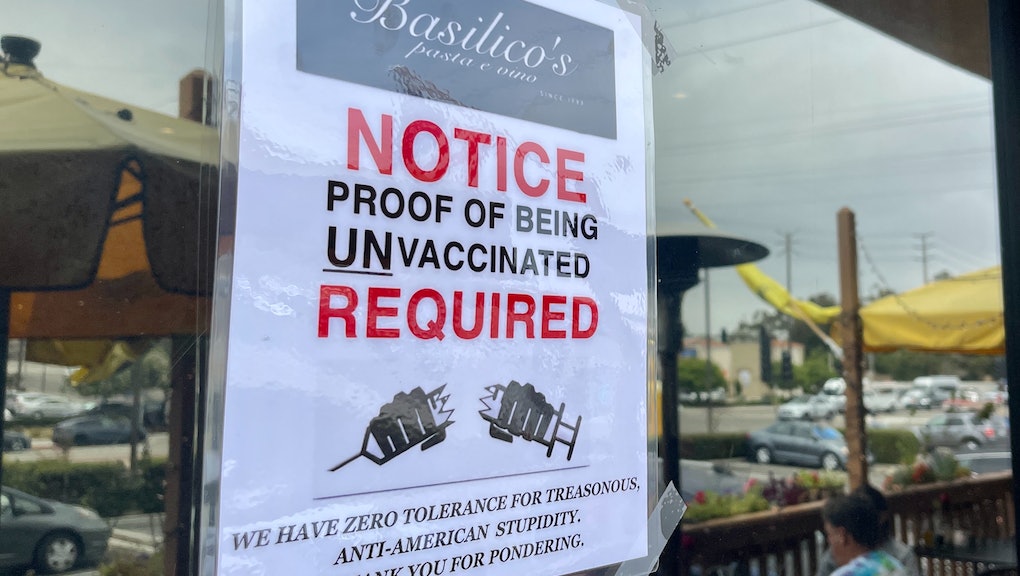 This restaurant's viral anti-vax stance is a sad, predictable sign of our culture wars

If there was any question as to how utterly absurd our hyper-politicization of everything is in America, look no further than Huntington Beach. Yesterday, a photo outside of a restaurant in the area went viral, depicting a sign that prohibited vaccinated people from dining. “Proof Of Being UNvaccinated Required,” the sign read. “We have zero tolerance for treasonous, anti-American stupidity. Thank you for pondering.”

The sign was among the most extreme examples of the state of our culture wars. It is, by now, unsurprising that the pandemic and the COVID-19 vaccine have been weaponized strategically — polarization on anything and everything is the playbook — by the Trumpian acolytes that have contorted themselves to adhere to the former president’s base. But the fact that a restaurant would go to such lengths, to willingly harm their own business (the long con that this would in fact attract more patrons due to its attention-grabbing stance is doubtful), in order to play to this politics of antagonism that they have been fed still feels startling.

The wording, as well, likening vaccinations to “treasonous, anti-American” behavior neatly encapsulates the effectiveness of this kind of partisan politics — even many conservative pundits and politicians haven't used such sharp language, but this kind of thinking is a natural result of the us-vs-them framework and certainly not confined to a team at a restaurant. More troubling, the incident arrives less than a day before the CDC announced new mask guidelines in reaction to a disconcertingly growing surge of cases as the Delta variant continues to spread. A mostly reopened country will not be deterred by these new backpedaling guidelines, certainly not those who refuse to to take the vaccine and see doing so as un-American.

There is a quiet, smug commentary in light of the context around incidents like this. As the newest variant spreads rapidly and ravages swaths of the unvaccinated, some online express a kind of get-what-you-ask-for reaction, as if those who own this restaurant will be rudely awakened by their own ignorance.

Mass death, though, is unspeakably tragic, no matter the circumstances. It’s not satisfaction we should feel that individuals such as these may eventually suffer the consequences of their actions and have willingly exposed themselves to a deadly disease. It’s instead deep sadness that those same individuals have instead been exploited, swayed to pick a side and potentially die over the larger agenda of a privileged few who are themselves vaccinated, protected, and still in power.

More like this
How the shock and confusion of 9/11 enabled our modern conspiracy era
By AJ Dellinger
Vaccines are good. Threatening to evict someone over them is not
By Rafi Schwartz
I never want Tucker Carlson to stop talking about Nicki Minaj's cousin's friend's enormous balls
By Rafi Schwartz
Stay up to date