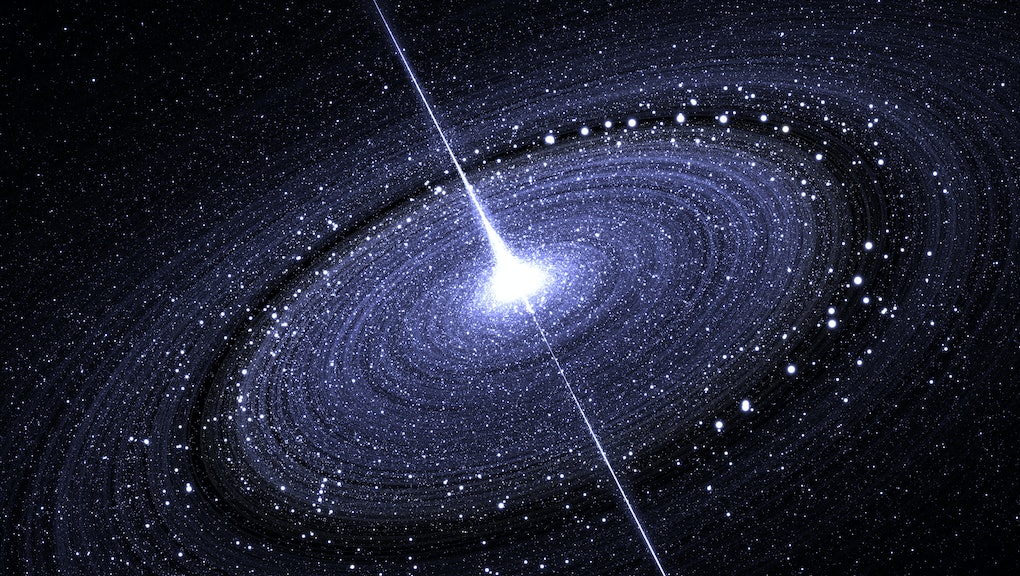 Supermassive black holes are just that: massive. But despite the fact that they're impressively huge, seeing a cluster of them in a relatively small area isn't that uncommon. Things really start getting weird, however, when three entirely separate black holes are found swirling around each other and eventually merging together. It looks like that's exactly what's happened with the galaxy NGC 6240, which appears to have three supermassive black holes now hanging out at the center of the galaxy.

Scientists have discovered that the galaxy has clearly been affected by the gravitational pull of what they're seeing as a triple merger between the holes. It was previously assumed that the galaxy's shape was simply due to two galaxies merging, after colliding while moving around hundreds of miles per second. This would have lead them to begin converging into one galaxy, with two supermassive black holes at the center. That was not the case, however, as they discovered when they took a closer look at NGC 6240's core.

Utilizing 3D-mapping techniques, researchers were able to identify the three unique supermassive black holes. The images obtained by the MUSE 3D spectrograph on the European Southern Observatory's Very Large Telescope in Chile showed three different "nodes" at NGC 6240's center, which was taken to mean that two black holes are still accumulating matter, while the third is dormant at this point.

Each black hole was estimated to be the weight of over 90 million of our suns, a unit known as a solar mass That's such a difficult number to fathom that it seems improbable that we could ever witness something like it. They're absolutely gargantuan in comparison to even the one supermassive black hole at the center of our own Milky Way, Sagittarius A*. It weighs around 4 million solar masses, which is still a number that's difficult to truly conceptualize.

"Up until now, such a concentration of three supermassive black holes had never been discovered in the universe,” co-author Peter Weilbacher at the Leibniz Institute for Astrophysics Potsdam said in a press release of the study.

"If, however, simultaneous merging processes of several galaxies took place, then the largest galaxies with their central supermassive black holes were able to evolve much faster. Our observations provide the first indication of this scenario."

Scientists have spotted three black holes on their way to melding together before, but this is the first sighting of it actually happening, and as such it's making waves.

Of course, the merger is still incomplete. The trio likely won't complete the point where they reach one parsec apart (where they remain in stable orbit) until billions of years from now. It's probable that humanity won't even be around to see it happening. But it's possible that, since this gathering of the black holes into one conglomerate exists, there are others out there we're missing.