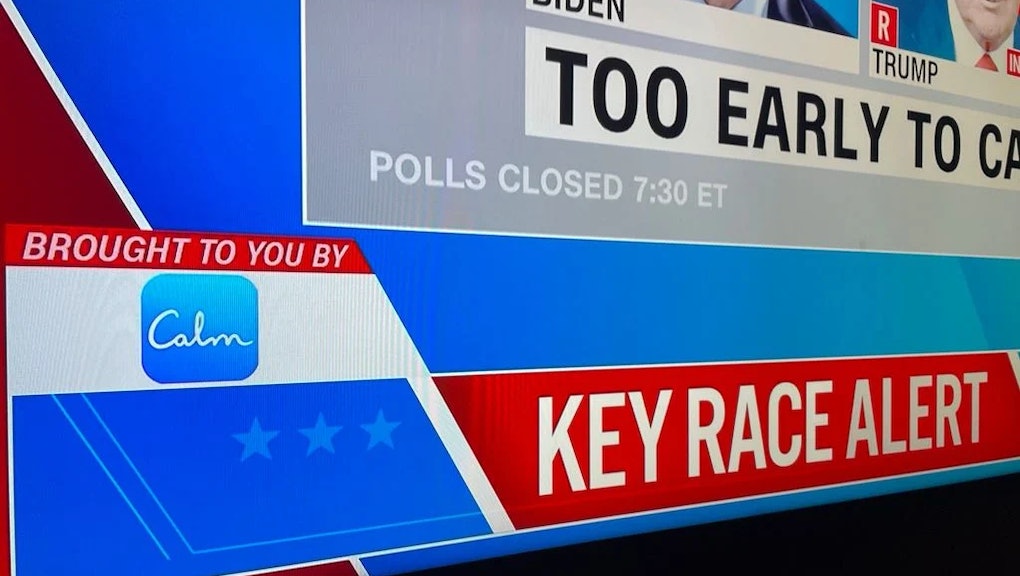 To hell with the relaxation industrial complex. Embrace your rage instead

Before millions of Americans flocked to the polls on Tuesday, many were predicting that it would be the most stressful day of their lives. As the results of the election began to roll in last night, it was understandable why anyone would feel intense anxiety around the unpredictable result. Everyone from political talking heads to the candidates themselves were reminding people to stay calm. At one point in the night, “calm” began trending on Twitter, when CNN viewers realized that the Calm app was ironically sponsoring the network's incredibly nerve-wracking “Key Race Alert.”

“We understand the uncertainty of this election cycle can be a source of anxiety for many of us, especially as it coincides with an ongoing pandemic. Our goal during CNN’s Key Race Alerts was to provide viewers a moment of Calm, and a reminder to take a deep breath during a stressful night,” a Calm spokesperson told Mic, adding that it’s refreshed its resource hub with free mindfulness tools to help navigate this stressful time.

The pressure to stay calm in the midst of the chaos of 2020 has been growing, even ahead of election day. The meditation market in North America has grown significantly over the past decade, reaching an estimated value of $2.08 billion this year. Americans trying to reduce their anxiety in the midst of 2020's deadly pandemic and civil unrest have only fueled this growth. The coronavirus lockdown led to a surge in downloads of mental wellness apps including Calm, which reported a staggering 3.9 million downloads in April. Last month, HBO Max jumped on the meditation bandwagon, teaming up with the Calm app to release “A World of Calm,” a television show designed to induce deep relaxation through beautiful cinematography capturing nature around the world.

It makes sense that the relaxation industrial complex would try to profit off of election anxiety, but every urge to breathe and stay calm in the past 24 hours has only been a reminder of how chaotic things are. Governor Tom Wolf joined the chorus of "stay calm" pleas coming from politicians around the US. In a video message, he urged Pennsylvanians to remain relaxed as the pivotal state continues to count its votes. It’s nice to think that escaping through our screens is easier than ever as this contentious election plays out, but we should be doing the opposite.

Hours before polls closed, storefronts from L.A. to D.C. were being boarded up. In the wee hours of the morning, the president held a press conference to claim that the election is rigged if he doesn’t win. In an election that should have been a clear rejection of a president who believes white supremacists are “very fine people,” the country still has trouble making up its mind, suggesting more people need to tune in than tune out.

So maybe now isn’t actually the time to be staying calm. Yes, we must protect our mental health and we must be patient while all the votes are counted. But regardless of the winner, it’s clear there is still a lot of work to do that doesn't include downloading apps.

More like this
The NFT gold rush, explained by the world's first meme manager
By Kara Weisenstein
How “stoopers” turned New York City sidewalks into trendy, sustainable thrift shops
By Jasmine Vojdani
Joe Rogan is a clear and present threat to our Hot Vax Summer
By Kara Weisenstein
Stay up to date