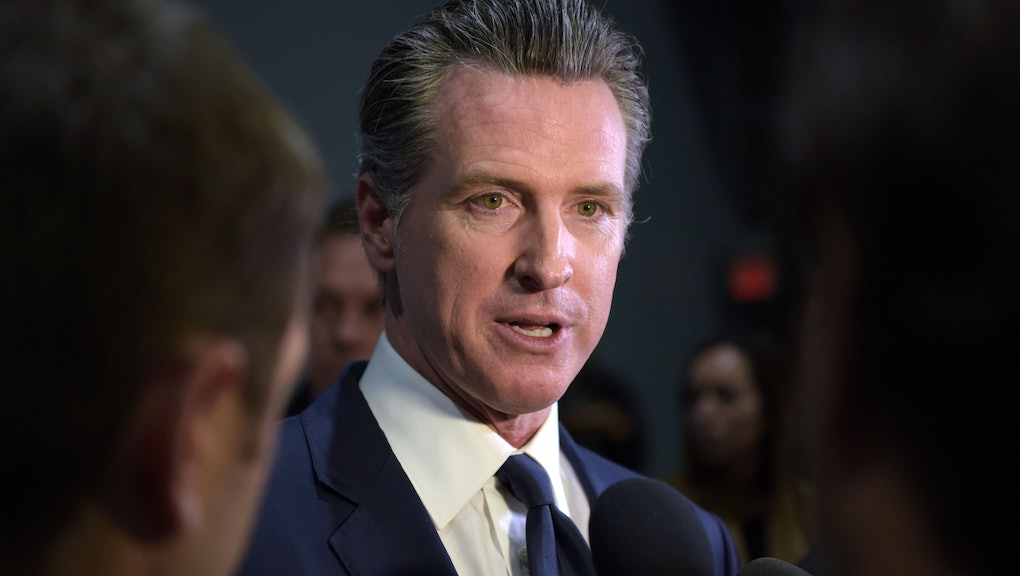 To save money, California will close its youth prison system

As the coronavirus pandemic continues to weigh heavily on state budgets, state leaders are working to reappropriate funds as they try to deal with the massive loss of revenue. In California, though, money woes have indirectly delivered a win for criminal justice reform advocates. To forestall the severity of an inevitable budgetary shortfall, Democratic Gov. Gavin Newsom announced a revised spending plan Thursday that includes dissolving the state's juvenile incarceration arm, the Department of Juvenile Justice.

The announcement calls for disbanding the DJJ in two parts: halting entrance of new youth detainees beginning next January, and closing the four currently operational state-run facilities by 2023. The 750 youth detainees held by DJJ are generally between the ages of 15 and 25, says Renee Menart, a spokesperson for Center on Juvenile and Criminal Justice, and most have been convicted of robberies and burglaries. Menart tells Mic that those under the age of 18 will be directed to county-run facilities, and those over the age of 18 will be directed to adult facilities.

The conditions of incarceration are dire — and as the governor indicates in the new budget, they're also expensive. State-run juvenile detention and probation programs cost the state about $200 million each year, and a state budget report found that California spent about $300,000 on each incarcerated young person in 2019.

In order to stave off the economic harm from coronavirus, the state needs to cut costs. "With a higher demand for social safety net services increasing state costs, the $54.3 billion deficit is more than three times the size of the record $16 billion set aside in the state’s Rainy Day Fund," a press release from the governor's office explained.

The move isn't a surprise to advocates, as the governor had already indicated in earlier budget proposals a readiness to reduce the state's rate of incarceration, with specific attention paid to the hundreds of young people who are incarcerated in California. The pandemic did accelerate Newsom's timeline, though, which Jay Jordan, the executive director of Californians for Safety and Justice, says is a "huge win." Ideally, no child would be locked up, Jordan tells Mic, but it's a "transformative step in the right direction" and a shift in "the way California is viewing public safety."

Jordan says that minors who are incarcerated in DJJ facilities will be transferred back to a local juvenile detention center, an important move as half of those currently incarcerated by the state are over 100 miles from their "home communities," according to CJCJ. Isolation from family and support systems can have dire consequences on the health and wellbeing of an incarcerated young person, Jordan says, and connection to community is one of the "biggest indicators of [future] success."

Jordan, who was himself incarcerated by the state's juvenile system, says that his parents "visited me every visiting time they got. It helped me out so much that I felt loved." Being close to family and loved ones is a way of saying "you are still human, we still value your life. That speaks volumes to kids," Jordan tells Mic.

The move also indicates to the public, Jordan says, that "we don't need youth prisons." The CJCJ found that "most youth return to the justice system within three years of their release from DJJ." In other words, incarceration often leads to further incarceration for young people. Menart says that these "facilities prepare youth for an institutional setting," as opposed to preparing them to be successful members of their local communities when they're free.

Closing the larger state-run juvenile prisons is also a matter of public health: A CJCJ report found that the state-run prisons often had unsanitary common area and dormitory conditions, and additionally failed to protect incarcerated youth from beatings and sexual assault. There's also evidence that suicide attempts are on the rise.

California's move to close state juvenile detention facilities is just the latest in a number of steps taken across the country to reduce the number of incarcerated people incarcerated. The movement has gained particular steam as coronavirus threatens the close quarters and resource-strapped conditions in jails.