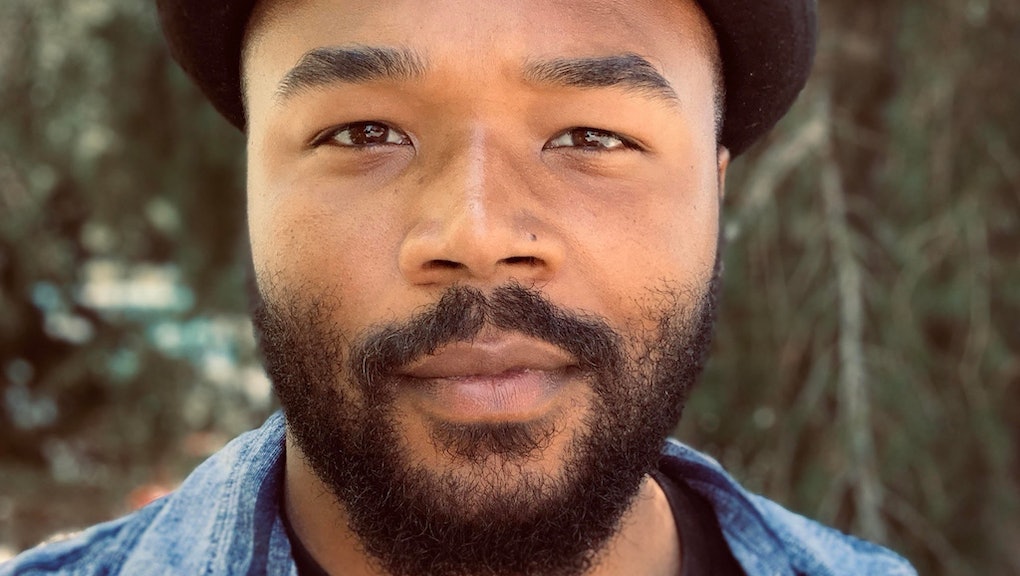 To 'Soul’ animator Frank E. Abney, Black visibility is the most powerful muse

Speaking with animator Frank Abney III over the phone, his gentle and amiable voice resonates with warmth, humor, and ongoing grief. His father passed away when he was five, an experience that not only informed his career choice (he tells me The Lion King, with its focus on Simba's journey mourning Mufasa’s death, inspired him to pursue animation in college) but also continues to impact him and his journey as an artist. This ongoing struggle is reflected in Abney’s latest project, Canvas, which debuted on Netflix in December 2020. The film, Abney's first animated short, tells the story of a grandfather who grapples with the pain of an immense loss that causes him to abandon all the things he once held dear.

Abney has worked as an animator on blockbusters like Coco, Frozen, Incredibles 2, and October 2020’s Soul; and as an executive producer on the Academy Award-winning short Hair Love — but Canvas is different. A poignant critique concerning the usual topics for storytelling studios is that they can crank out stories about rats, fish, bugs, and characters from diverse cultures; however, the same level of attention and research is bypassed when African-American characters are concerned. With Canvas, Abney granted himself the opportunity to highlight characters that look like him and represent them as a natural part of the animation canon, while also telling a deeply personal story. The idea came to him during a rough patch in his career, after noticing how his niece and other kids move through life in a more carefree manner than adults — they “don’t hold that weight on their shoulders like we [do],” he tells Mic. He thought about his mom, a single parent who didn’t often express herself artistically but doodled while on the phone; and his grandfather, “who was very quiet and stoic.”

“I took all those things and created something that people can identify with, like the loss that we experience, specifically in the Black community,” Abney said during a conversation with Mic. “We go through a lot of tragedies and traumas, and it feels like we just have to lock it away and move on; we don't have the time to go through it and heal. That's the case in Canvas: Grandfather [who is a painter] went through this loss, and he locked away all of his artwork, paintings, and the things that remind him of [it].” But, he adds, “I want to send the message that although we have to go through these traumas and experiences, having the people around us that we care about — be it friends, family, whatever — means we don't have to go through it alone.”

Canvas also mirrors Abney’s own experience of using art as a form of therapy to deal with trauma and express himself, something he says dates back to childhood. In this case, the resulting creation launched a new era of his career. It took six years to develop the film, which Abney did in his spare time while working a full-time job, with the help of a successful Kickstarter campaign, several volunteers, and a small-but-dedicated team.

It paid off. Not only did Canvas debut to critical acclaim — it won the NAACP Image Award for Outstanding Animated Short and was nominated for the Hollywood Critics Association Best Short Film award — but Abney is also now developing a full-length animated feature for Netflix, with plans to present even more stories of well-developed African American characters dealing with rich and honest experiences. And he’s helping ensure more BIPOC creatives get a seat at the Hollywood animation table, too. Last year, Abney and his colleagues, Bobby Pontillas, Trent Correy, and newly appointed member Monica Lago-Kaytis, launched Rise Up Animation; the organization offers free workshops, panels, and one-on-one mentorship and feedback sessions for BIPOC artists across 20 disciplines.

Ahead, Abney shares more about his own journey, how he’s leading the charge in increasing diverse storytelling, and his reflections on the industry.

What I was focused on [getting] right in Canvas was being an authentic story about a family that just happened to be Black. I represented a part of my journey and culture, and I wanted to make sure whatever we had on-screen, we used our resources to represent it well. The biggest challenge was hair; our hair texture hasn't been [illustrated] very often in animation, so we spent a lot of time using our limited resources to make sure we delivered something we were happy with. I have to thank my groom artist for being patient with me. There were some things I just couldn't let go through when it came to the hair. We tried to capture the essence that made our hair unique, from the texture to the unique way an afro can group.

We were working pretty closely on getting the hair right. As soon as the characters went through the 3D modeling phase, I started gathering references. We referenced actors like Kimberly Elise and Teyonah Parris, who wear their hair naturally. It initially started off more European, curly, straight kind of feel, but we kept going back and forth. I would do draw-overs on the hair, send more reference photos, and talk about the texture. It wasn't just about it being curly, but getting the right kind of kink and fuzz and how the light reacts to it.

What would you like to see Hollywood do to improve representation of Black characters and stories?

It boils down to providing more space for people of color to tell their stories. I think the lack of that has been beneficial as well, because it forces us to tell our own stories and not wait for Hollywood to do it for us or provide us with the opportunity to do it. It actually has given us that power to find a way of doing it on our own. One of my huge inspirations going into filmmaking has been people like Robert Townsend and Keenan Ivory Wayans; people who really took it on themselves to create something special and do it in a way that was on their terms while working within the spaces they had. It’s very innovative and inspiring as a creator to not wait for anybody.

Have you seen any other improvements in the industry to increase representation?

Seeing more films out there on both the live-action side and the animation side, I think people have opened up a little bit more to what’s possible. Black Panther was a prime example of the power [that exists when] you get black leads with a compelling story and put it out — not only at the box office, but also culturally.

How do you make sure you’re properly representing characters in your projects?

Telling the truth in our experiences — not guessing. If it's an experience that I can't speak to — because of my background, or being male telling a female's story — I'll get the right people involved to educate me on the experience. I never want to tell a story that's telling people what their background is. I'd rather have the honesty come out through the story from a place that's real.

You worked on Pixar’s highly successful Soul. The resounding criticism is the denial of audiences seeing an African-American lead character throughout the film without the character becoming transformed into another entity. Many feel it misses the opportunity to educate and enlighten audiences about the African-American experience. What are your thoughts on this topic?

I can't speak to Soul's decision, as it was made before most of us of influence were involved. It's important to give Black characters the same respect as other characters out there and let our stories retain their integrity. I'm very much a believer that we can tell any story in animation. Kids are highly intelligent and often don't get the respect they deserve in what they understand and can handle. That's why with Canvas, I didn't stress over adding a bunch of humor and extra fantasy elements to validate it in being animated.

Do you think this will become an ongoing trend in animation in which the physical appearance of minority leads has to change for audiences to embrace them?

Is there a lack of Black storytellers and animators in the field?

I think there are a lot of people in the field. In my opinion, it’s about giving certain people a chance. There are so many people who haven't been discovered whose work is amazing. Social media has been huge in terms of finding those people who are creating videos — you get to see the creativity and the ingenuity that goes into these videos people make, sometimes with close to nothing. I think of those kids in Africa, [known as the Ikorodu Bois] creating remakes of movie trailers. They've made such a splash with their work. It's not even about the production value; it's the ideas and how you interpret the world around you and come up with something based on what you have to make something entertaining. I don't think it's a lack of people in the field. I think it’s just looking for them.

Why did you create Rise Up Animation?

The goal with the program was to help people of color gain access to industry professionals and bridge that gap to Hollywood with people all around the world. This idea of making films or joining these animation studios has always seemed so far away, so we're trying to bring it closer to people around the world who haven't had the opportunity to access tools to help them along the way.

Two animated films that center Black characters — Spider-Man: Into the Spider-Verse, and the film you worked on, Hair Love — won Academy Awards. How did those wins impact you?

It was inspiring, having not seen many Black characters in animation growing up, to see the films recognized on that level. We don't always feel we have a voice, and to know that there is an art form to express yourself and there is a vehicle to take it to a broad audience and connect with other people, it's kind of like paying the inspiration forward or paying healing forward. Because as different as we are as people, we're very much the same too, and we deal with some of the same stuff, so it was a powerful moment that will always sit with me.

What advice would you give future BIPOC animators who want to break into the industry?

Tell your story. I can only speak from the studios I've worked at, but when we're looking at reels and artists, it is about being good at your craft, but it's more about who you are as a creator, how you interpret the world around you, and coming to your art with that unique perspective. Being vulnerable and bringing that honesty to the work, that's what's going to connect with people. Your voice matters, your stories matter.

This article has been edited for clarity and brevity purposes.