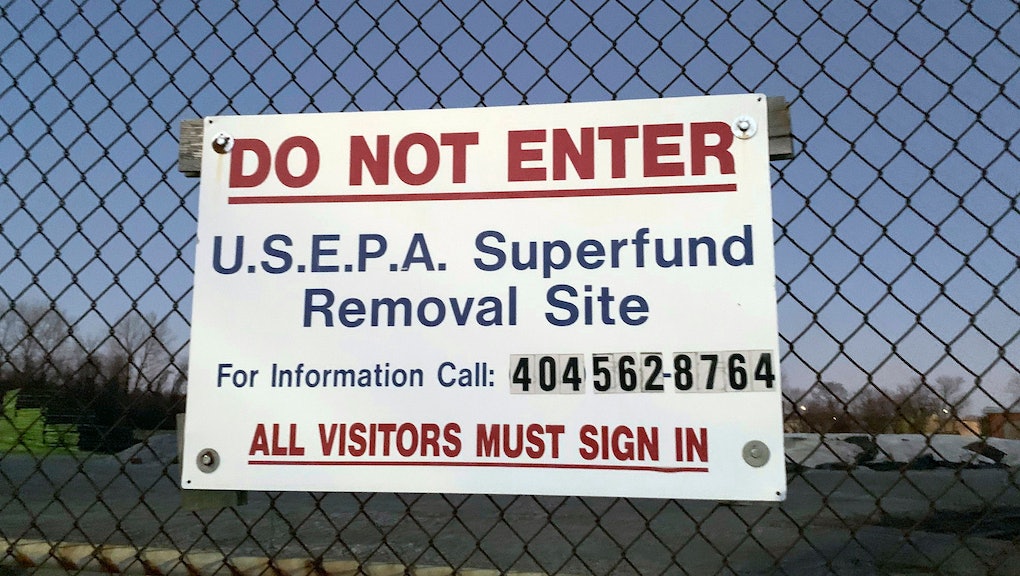 Around the United States, there are thousands of areas that have been turned into dumping grounds for hazardous waste. Manufacturing facilities, processing plants, landfills, mines — all with their own, unique forms of contamination that, if left unaddressed, could pose a major threat to the health of nearby communities. Since the 1980s, the Environmental Protection Agency (EPA) has been tasked with containing and cleaning up these so-called Superfund sites. The reality of climate change has created new problems in maintaining these areas, and a new report from the Government Accountability Office (GAO) suggests that most Superfund sites are at risk of being affected by climate disasters.

The GAO, a watchdog group that works within the federal government, examined 1,751 total waste sites located across the U.S. It found that 945 of them are at risk from at least one form of environmental hazard. That includes the possibility of a wildfire, flood, storm surge or rising sea levels — all threats that have been exacerbated in recent years by climate change. The EPA has essentially been asleep at the wheel when it comes to guarding against these potential threats, perhaps in part because under the Trump administration, the general belief appears to be that climate change isn't real and isn't responsible for exacerbating extreme weather events. That could prove problematic as these weather events continue to happen and put areas containing Superfund sites at risk.

Floods are by far the biggest threat to these areas, threatening more than 700 Superfund sites across the country. We have already seen what kind of effects flooding can have on these waste sites, and the results aren't pretty. After Hurricane Harvey dumped more than 40 inches of rain on southern Texas, the city of Houston experienced record levels of flooding. That flood water made its way to U.S. Oil Recovery, a former petroleum industry waste processing plant turned Superfund site, and caused apparent spills. The site was known to be one of the most toxic Superfund locations in Texas. U.S. Oil Recovery was shut down by regulators in 2010 after it was discovered that the operation posed a massive environmental threat to nearby communities. Samplings from the site revealed high concentrations of chemicals like benzene, ethylbenzene and trichloroethylene — all of which have direct links to cancer. Toxic and destructive heavy metals like mercury and arsenic were also found at the site. The site was so dangerous that the owner was charged with five criminal felonies for the polluting operation.

While it was by far the most dangerous, the U.S. Oil Recovery site was only one of at least seven Superfund sites that were affected by the hurricane-caused flooding in the Houston area, according to the Associated Press. Tracking the actual impact of those sites during these types of storms is next to impossible — it's hard to know exactly how much contamination has been spread and where it is spreading to. But it undoubtedly poses a threat to neighboring communities, waterways and other areas that would otherwise be safe from the type of dangerous chemicals and contaminants that are supposed to be contained at the waste sites. By the EPA's own account in a 2012 study, more than 500 Superfund sites sit in flood zones and present the risk of toxins being carried to surrounding areas.

Similarly, wildfires have at times encroached upon Superfund sites and created complications in attempting to contain the blaze. In 2018, a sizable fire started to push across Montana and toward the Libby Superfund site, home to one of the worst human-made environmental disasters in U.S. history. The site was once home to a mining facility that contained asbestos. During its operation, hundreds of people died from exposure and thousands more were injured by it. The asbestos contamination is still present to this day, and when the fires started to approach the facilities, first responders had to wear special respirators to allow them to continue to fight the fire. Later in the same year, a wildfire in California worked its way to the Santa Susana Field Laboratory, a former nuclear testing site. While officials have claimed that there was "no evidence of discernible radiation" released despite the fire, the threat remains as long as sites containing harmful, potentially deadly chemicals remain in the path of climate disasters.

These types of scenarios are likely to only get more common and potentially worse. The Fourth National Climate Assessment, published in 2018 by government scientists, found that climate change is already making storms wetter, producing more flood waters — findings that have since been backed up by a recent study of storms conducted by Lawrence Berkeley National Laboratory. Just as climate change is making storms wetter, it is also making some areas of the country dryer and more at risk of wildfires, which now tend to burn longer and do more damage. Essentially all of the weather conditions that would threaten these Superfund sites normally are getting worse — and the EPA is already ill-equipped to deal with the conditions of today let alone with whatever climate change may bring us in the coming decades.

If you're hoping the GAO report may be a wake-up call to Trump's EPA to start taking these climate disasters seriously, then your optimism is to be applauded, though it is likely entirely misplaced. The GAO provided four recommendations for the EPA on how it can better prepare for potential climate disasters at Superfund sites. First, it suggested that the agency standardize how it determined boundaries around the waste sites so it can better contain them. Then it recommended clarifying how its actions to manage climate-related challenges align with the agency's current goals. The GAO also raised the idea of providing more direction on how to calculate climate risks and its response plans to these events. The EPA brushed off three of the four suggestions, opting only to standardize Superfund site boundaries while choosing to ignore the recommendations that included better planning for climate-related weather events. That perhaps shouldn't be a surprise from an agency that has decided that science no longer informs its decision-making process, but it's surely not what the people near at-risk Superfund sites want to hear.