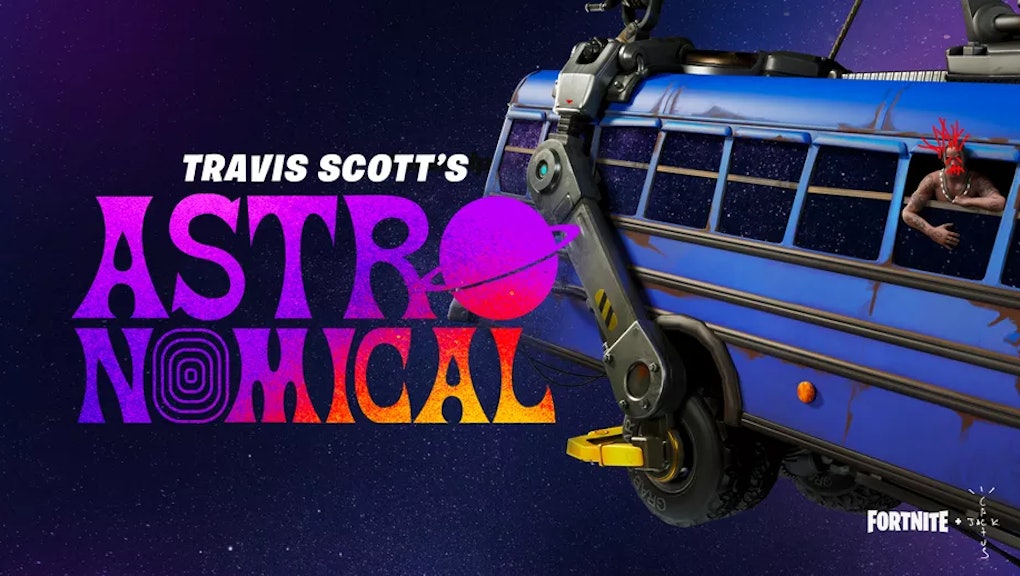 Travis Scott is going on tour — in 'Fortnite'

Concerts may not come back for a very long time, so the only alternative right now is happening at home. One World: Together At Home, the more dystopian and ballad-heavy take on Live Aid for These Unprecedented Times, played out over the weekend on ABC. Most shows are a bit less formal, feature less famous talent, and happen on Instagram Live with higher financial stakes for the artists involved.

A more unconventional at-home mini-tour has already been booked for later this week. Travis Scott, who was originally slated to headline the last two weekends at Coachella, is filling the touring void on Fortnite. Today, Epic Games announced that Scott will headline the game’s next concert event. It’s called Astronomical, and will take place across 5 different events from April 23-25. In this way, it’s structured more like a tour to accommodate every time zone in the world. Scott’s also set to debut a brand-new song sometime during Astronomical. Check out the schedule below:

Starting on Tuesday, players will be able to be able to unlock free in-game gear through Astronomical Challenges, leading up to the shows later this week. Scott’s no stranger to Fortnite himself, after hopping on the record-breaking Twitch stream with Ninja, Drake, and Steelers player JuJu Smith-Schuster in 2018. If the success of that stream or Marshmello’s concert last year that was attended by 10.7 million players are any indication, the servers may need to have this spread out over five sessions.

While Marshmello’s Fortnite set last year might have seemed like a bleak development to onlookers, games have been an increasingly common and surreal place for concerts in the pandemic. Emo titans new and old like American Football and Origami Angel have hosted shows on Minecraft in recent weeks (and in one case crashed the server.) It’s not an ideal replacement, but this is what we’re stuck with for now.