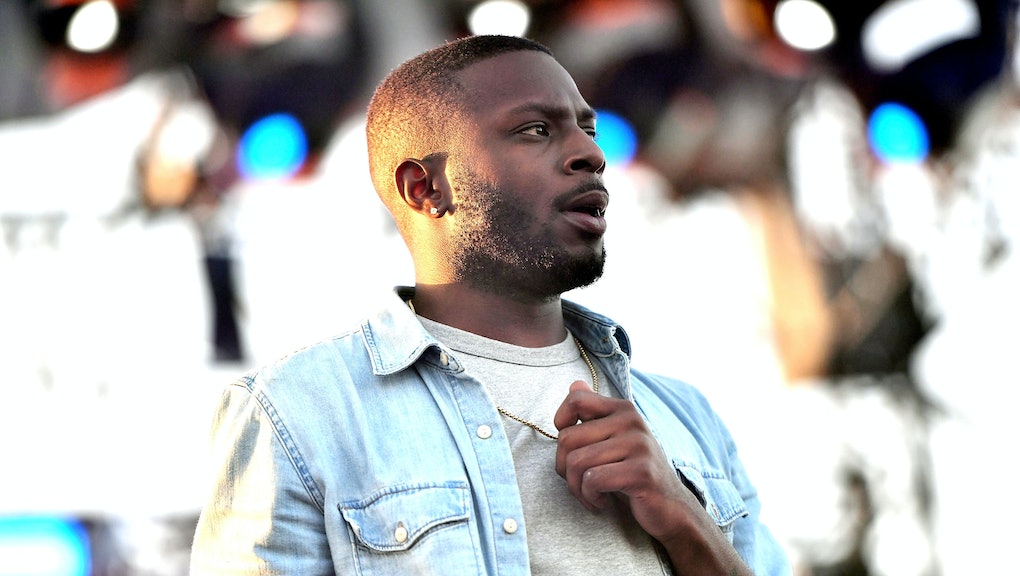 Triumph and trauma collide on Isaiah Rashad's 'The House Is Burning'

When I spoke to Isaiah Rashad in 2016 ahead of the release of his sophomore album, The Sun’s Tirade, he sounded repentant. In the lead-up to release day, the now-30-year-old Chattanooga, Tennessee rapper had bared his soul to journalist after journalist, myself included, admitting to his pitfalls and refusing to play victim. Instead, he laid his cards out on the table and fessed up. “I couldn’t really make an outright negative, celebrating-negativity song,” Rashad said, referring to the addiction issues and financial mistakes that had delayed the creation and release of The Sun’s Tirade. "I can’t talk about it without sounding like I f*** with it. And I couldn't figure out a way to talk about it until after I pushed a lot of that s*** behind me.”

It turns out, Isaiah Rashad needed a little more time to overcome those tribulations. In a May cover story for the FADER, Rashad revealed that his problems trailed after him for years. In 2019, he finally reached out for real help, spending time in rehab. “I’m swimming in the trauma, baby,” Rashad half-jokingly told writer Jeff Weiss in a moment of reflection.

Many of us have found ourselves thrashing in the limitless waters of trauma, and that’s what attracted listeners to Rashad in the first place. His willingness to backstroke through the obstacles instead of floundering amongst them became a prominent characteristic of his artistic style, introduced in 2014’s modern classic, Cilvia Demo. Rashad furthered that sense of soul searching on Tirade, and his latest effort, The House Is Burning, is a continuation of that longing for stability and understanding of self. Isaiah Rashad is in constant pursuit of a healthier way to deal with his traumas, both inherited and self-inflicted. And music, with his toes dug deep into his sonic foundation of classic Southern hip-hop, is the most direct avenue for him to heal himself.

The House Is Burning is Isaiah Rashad’s comeback after a five-year hiatus, yes. It’s a highly anticipated follow-up to The Sun’s Tirade and Cilvia Demo, yes. But at its core, The House Is Burning is a preservation of the Deep South and the people who live there. The people who live an irreplicable, yet widely shared set of experiences. The bottom of the map drives The House Is Burning. Isaiah Rashad is most influenced by the artists that came out of his home state in the ‘90s and early aughts: acts like Three 6 Mafia and 8Ball & MJG. While he’s largely motivated by the creatives of Tennessee, he doesn’t hesitate to tip his hat toward other influential regions across the lower U.S., like Texas, Georgia, Louisiana, and Virginia. He does this both specifically, and universally.

Track one of The House Is Burning, “Darkseid” (titled after the DC Comics villain), sees Rashad building a foundation of reverence for all things Southern, starting with a song that feels decidedly like Outkast with its atmospheric production and wispy, ethereal thoughts about the state of humanity. “You know we be scared to feel, or anything else,” Rashad raps, hovering between contemplative and rational as he cloaks his true emotions before pulling listeners into the next revelatory bar. “Darkseid” opens with the sound of a tape being popped into a deck and ends with the slam of a car door, conjuring the visual of a late-night ride in an old-school whip in the South.

Even when he’s rapping about common themes across hip-hop — intimidation tactics, women, money, and the aforementioned cars — Rashad still sounds unmistakably individual. You almost feel like you have to lean into the speaker to hear him clearly beyond the omnipresent thundering bass, a tactic that feels intentional. With the exception of a select few songs in his discography, Isaiah Rashad’s delivery is tranquil, composed, and sometimes difficult to decipher. He sings in dreamy metaphors, and raps unguardedly about the darkness of reality, all with an assuredness that makes his storytelling vivid and visceral. Rashad’s debut and sophomore efforts came from two different sides of the same coin: the urgency heard on Cilvia Demo was subdued on The Sun’s Tirade, which sounded like Rashad getting his point across in a more relaxed manner. The House Is Burning unifies those albums’ respective tenacity and temperedness.

Rashad’s new album brims with classic Southern references, as evidenced by the title track, “THIB.” On it, Rashad interpolates Goodie Mob’s “Cell Therapy” (“Who’s that creeping in my window?”) and Missy Elliott’s “The Rain (Supa Dupa Fly)” (“Top down, loud sounds, see my peeps”). The final 25 seconds of the song grind to a chopped-and-screwed halt, a subtle salute to the late, Houston-based DJ Screw. Altogether, these influences feel like Rashad’s attempt to gather the gems of the South and present them to us like a kid with a handcrafted gift. He’s showing us what’s possible when he focuses on his purpose, and utilizes the tools that have been passed down to him.

The homages continue with kick-back anthem “Wat U Sed,” featuring Iamdoechii and Kal Banx, which includes a revival of the underground 2003 club song “Bunny Hop” by Louisiana's Da Entourage. On the deep cut “Chad,” Rashad pays tribute to a pioneer of his distinct approach: the late Pimp C, AKA Chad Butler, of the Texas duo UGK. By titling the track after Butler and flipping his verse from the 2000 mega-hit/JAY-Z collaboration, “Big Pimpin,” Rashad extends the shelf life of a legacy artist’s work from more than two decades ago. “RIP Young,” an advice-driven standout, samples Project Pat’s menacing 2001 song “Cheese and Dope,” produced by Juicy J and DJ Paul.

While he proudly touts inspiration from his influences, Isaiah Rashad has plenty of his own ideas without them. A single released ahead of the album, “Headshots (4r Da Locals),” sounds like a resounding aching within Rashad: to get back to his craft, to be heard, to get his message across. On the frenetic, cacophonic “From the Garden,” he sounds intense and insistent alongside the comparably hype Gen Z superhero Lil Uzi Vert. Uzi opens his verse with a casual irreverence, then matches Rashad’s ferocity for the remainder of his feature. “Score,” an introspective joint produced by the prolific Kenny Beats and featuring Rashad’s TDE labelmate SZA and Atlanta singer 6LACK, shines through. Via a shared chorus and perceptible verses that build smartly on top of one another, the song sounds as cohesive as anything Rashad has ever been at the helm of. The second half of the closing track, “HB2U,” with its gauzy production and fragile hook (“You are now a human being”), sounds more like the Beatles than it does Triple Six.

Everything on The House Is Burning reminds me of something. At times, it’s because there are direct samples and interpolations. But overall, it feels a great deal familiar. Like Rashad is in no rush, but he’s on his way to his destiny, similar to the artists who mapped out the blueprint for every album he's created thus far.

The House Is Burning sounds like we’re living the sessions with Isaiah Rashad. Giggles, mumbles, post-edit instructions, and layered ad-libs are peppered throughout the album, inviting us into the creative process. Within the songs themselves, Rashad leans into reiterating and repeating himself, giving us a chance to reflect on his words on our own time and through our own lenses. By including these informal elements, Rashad creates a safe space for his predecessors and successors alike, proving that despite all he’s been through, he — and all of us — can still live a spirited life. And after so many traumas, triumphs, hiatuses and comebacks, that spirit remains.