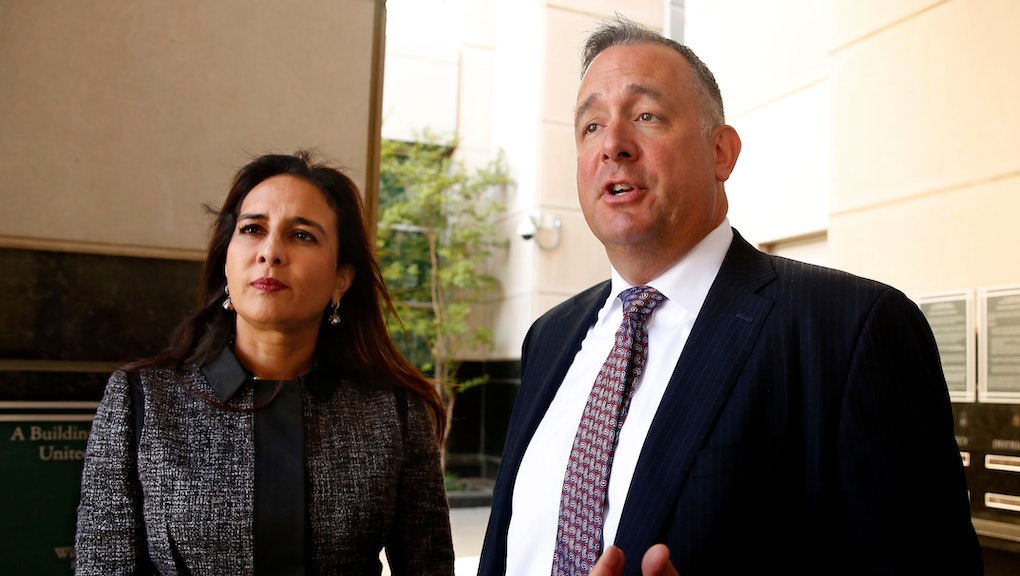 For communities of color, voter suppression remains a pressing issue, and it doesn't seem as if those concerns will be going away anytime soon. According to a leaked recording obtained by The Associated Press, one of President Trump's senior advisers discussed 2020 voter suppression efforts while meeting with influential Republicans. Although the adviser, Justin Clark, says his comments are being taken out of context, many are taking his recorded words as a warning of what's to come.

An audio recording of a Wisconsin chapter meeting of the Republican National Lawyers Association obtained by American Bridge and provided to AP caught Clark's comments. On the tape, Clark, who also serves as senior counsel to Trump's re-election campaign, can be heard saying, “Traditionally, it’s always been Republicans suppressing votes in places."

“Let’s start protecting our voters. We know where they are," Clark continued, per the recording. "Let’s start playing offense a little bit. That’s what you’re going to see in 2020. It’s going to be a much bigger program, a much more aggressive program, a much better-funded program.”

When AP asked Clark about his comments, Clark claimed, "My point was that Republicans have historically been falsely accused of voter suppression, and that it is time we stood up to defend our own voters."

Others aren't so quick to buy Clark's explanation. Mark Browne, the deputy director of liberal advocacy group One Wisconsin Now, told AP that "it's clear there's no law Donald Trump and his right-wing machine won't bend, break or ignore to try to win the presidency."

While Clark says that he was responding to "false" claims, there are many well-documented instances of voter suppression by not only Republicans, but the federal government overall. Black people are particularly vulnerable with tactics evolving from literacy tests and grandfather clauses to voter ID laws, felony disenfranchisement, and more.

Voter suppression is an especially big problem in battleground states. In Georgia, which has come to be seen as a battleground state in recent years, Fair Fight Action, the voting rights group led by 2018 gubernatorial candidate Stacey Abrams, filed an emergency motion to stop the planned purging of up to 330,000 registrations of "inactive" voters.

"Georgians should not lose their right to vote simply because they have not expressed that right in recent elections, and Georgia’s practice of removing voters who have declined to participate in recent elections violates the United States Constitution,” Lauren Groh-Wargo, the CEO of Fair Fight Action, said in a statement.

There's a similar issue arising in Wisconsin, too. Earlier this month, a judge's ruling signaled that 200,000 people could be stripped from voter rolls, which Democrats labeled an act of voter suppression.

"Voter purge in Wisconsin that disproportionately targets Democrats, people of color, and those who voted for Hillary in 2016," former Attorney General Eric Holder tweeted. "The expected unfairness. Fight this Wisconsin! Fight for a fair election."

Clark's comments are especially troublesome because 2020 marks the first time since 1982 that the Republican National Committee will be allowed to engage in poll monitoring during the election. The RNC was initially barred from doing so after the Democratic National Committee filed a lawsuit alleging the group intimidated Black voters in the 1981 New Jersey gubernatorial election. Those tactics included the RNC hiring off-duty cops to patrol precincts where people of color were likely to vote. The lawsuit resulted in a consent decree between the two parties' national organizations.

The consent decree didn't stop intimidation efforts though, Democrats argued, and it had to be updated in 1987 after Republicans made a voter-challenge list — challenging the eligibility of select voters — that was heavy on Black votes. According to The Atlantic, an RNC official had explicitly said that the list could "keep the Black vote down considerably."

“It is vital that Wisconsinites have free and fair access to the polls, and that we protect the security and integrity of our elections,” Wisconsin Attorney General Josh Kaul said, regarding Clark's comments. “The Wisconsin Department of Justice has been and will continue working with other agencies to protect our democratic process.”