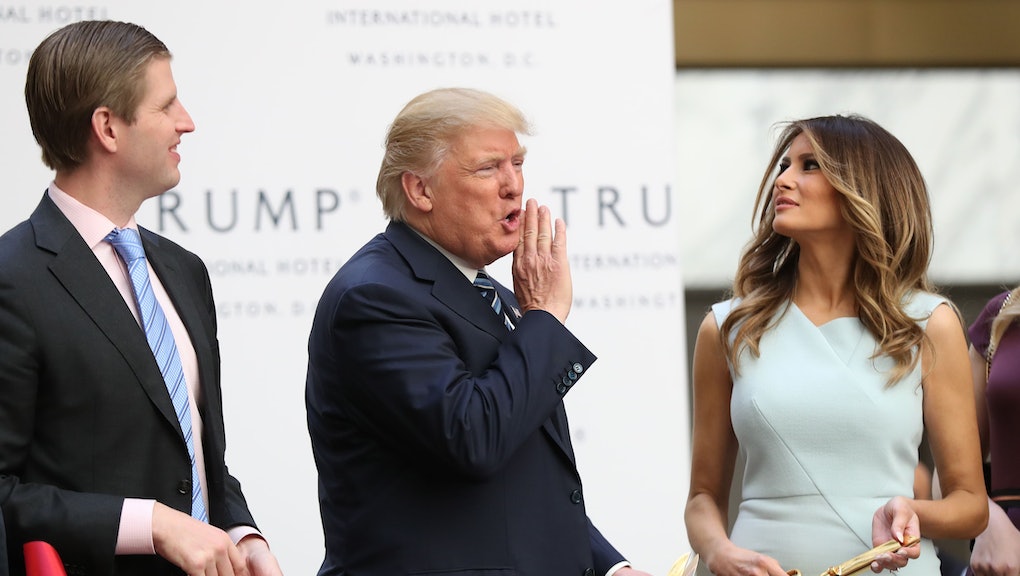 Trump allegedly lied on his taxes as recently as 2017, documents show

We already knew that President Trump's tax practices have been called into question. The New York Times published a Pulitzer Prize-winning investigation last year that showed that the so-called “self-made billionaire” had in fact used a complex series of tax dodges to inherit hundreds of millions of dollars from his father by undervaluing the family’s real estate holdings on tax returns. It was of course assumed that Trump had employed various sketchy tax schemes — why else would he go to such trouble to avoid handing over his tax returns? — but the specifics of what he’d been up to over the past decade had been elusive. But in a new investigation published Wednesday, ProPublica has provided a glimpse into how Trump has systematically used reporting discrepancies on his real estate empire to avoid paying his fair share of taxes.

The report is based on documents obtained through a Freedom of Information Act request, and it shows how Trump’s organization gave different information to his lender than he did to New York City tax authorities regarding occupancy, expenses, and profits for several of his buildings. For the taxman, Trump allegedly undervalued his assets, so that his taxes would be artificially lower; for lenders, he allegedly inflated the numbers to make things seem more profitable. The discrepancy between the reports constitutes “versions of fraud,” Nancy Wallace, a finance professor at the University of California at Berkeley, told ProPublica. “This kind of stuff is not OK.”

The tax documents in question became available via a FOIA request because Trump filed an appeal over his property tax bill for nine years in a row. ProPublica was able to obtain the information from the lender side because Trump’s lender, Ladder Capital, sold the debt on his buildings. Their analysis found that in 2017, Trump claimed twice as much income from one of his buildings to his lender as he did to tax authorities — meaning he may have lied to the IRS while literally serving as the U.S. president that the organization nominally reports to.

Trump also appears to have offered misleading occupancy reports for his skyscraper at 40 Wall Street. On Dec. 31, 2012, his company told a lender that the building was around 60% leased. Five days later, the company report it as 80% leased in a report to tax officials.

These kind of actions can earn severe punishments, ranging from fines to potential jail time. Former New Jersey Attorney General Anne Milgram said that “if I were sitting in a prosecutor’s office, I would want to ask a lot more questions.” Neither the Trump Organization nor the various companies involved, including Ladder Capital, the law firm Marcus & Pollack, and the accounting firm Mazars USA, provided on-the-record comment to ProPublica.

Meanwhile, various entities are aggressively seeking Trump’s tax returns. Last week, a federal court rejected the president’s attempts to shield his taxes from a subpoena by the Manhattan district attorney, who is currently investigating hush money payments made to former adult film star Stormy Daniels in 2016. The House is pursuing the returns through subpoena as well.

Trump’s legal team is sure to appeal the rulings, and it’s possible the fight over his records could go all the way to the Supreme Court. It seems clear that whatever’s in those returns, the president doesn't want us to see them.

This article was originally published on Oct. 16, 2019

More like this
Nearly half of Republicans believe absolute nonsense about Trump's Capitol coup
By Rafi Schwartz
It sure would be a shame if Fox News lost $1.6 billion for its voter fraud lies, wouldn't it?
By Rafi Schwartz
Matt Gaetz, who is definitely not a sex criminal, Venmo'd an accused sex trafficker $900
By Rafi Schwartz
Stay up to date