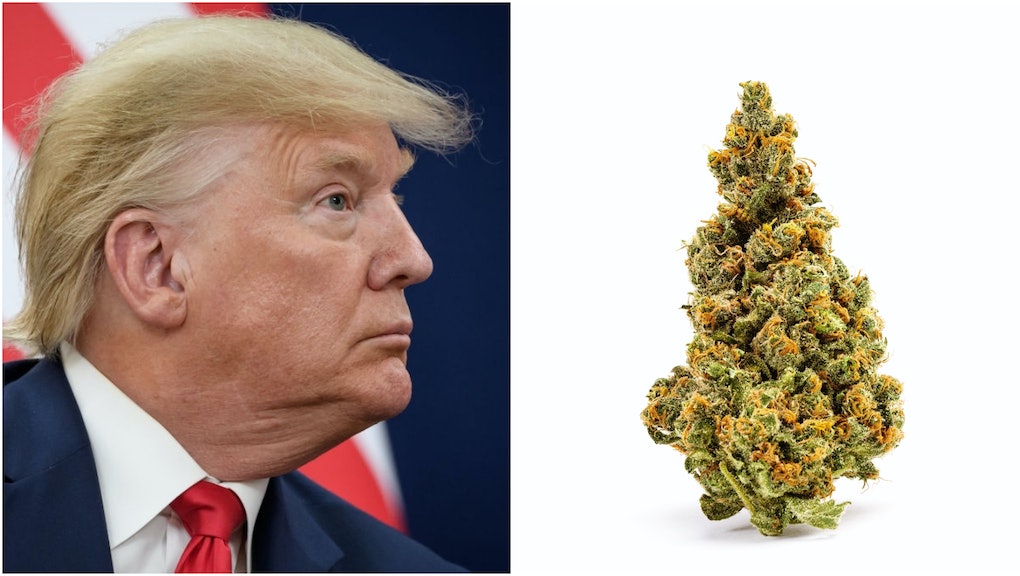 In a secretly recorded conversation leaked on January 25, President Trump said weed makes people “lose IQ points." But based on the research so far on the effects of cannabis on cognition, the comment appears to be yet another example of Trump misrepresenting the facts and grossly oversimplifying a complex issue.

The recording of a conversation about regulating the cannabis industry during a donor dinner in April 2018 was released by Lev Parnas, a former associate of Trump’s attorney, Rudolph Giuliani, VICE reported. Parnas reportedly aided in Giuliani’s search for dirt on former vice president Joe Biden in Ukraine, making him a key person in the impeachment trial.

Parnas opened the conversation by asking Trump whether he’s considered allowing cannabis businesses that are legal at the state level to access federal banking services. Trump responded with skepticism. “Do you think the whole marijuana thing is a good thing?” he asked.

Parnas cited cannabis as a potentially important issue for Republican millennials in the 2018 Congressional midterm elections. “In Colorado they have more accidents,” Trump reportedly responded, unswayed. “It does cause an IQ problem. You lose IQ points.”

There may be some truth to that statement, but only in a very specific circumstance: if you start consuming cannabis on a regular basis at a young age, according to a 2017 report from the National Academies of Sciences, Engineering, and Medicine. “If you use a lot of cannabis frequently and before your brain is fully mature, there’s a chance…that you could actually lose IQ points,” says Timothy Fong, a professor of psychiatry who helps lead the UCLA Cannabis Research Initiative. The brain’s endocannabinoid system is involved in regulating the formation of connections between neurons, per the National Institute on Drug Abuse. Adding cannabis — which acts on the endocannabinoid system — to the mix could disrupt this process.

That said, state legalization has broadened access to cannabis for adults. While the 2017 National Academies report mentioned above notes that cannabis impairs memory, attention, and learning within 24 hours of using it, there is no evidence to date that starting to use it in adulthood will lower your IQ or result in other cognitive problems in the long run, Fong tells Mic.

Indeed, the results of brain imaging studies on cannabis users have been inconsistent, according to a recent review of research on the effects of cannabis on human behavior. Although many studies have associated cannabis use with changes in the structure of certain brain regions, one recent study showed no evidence of brain structure changes in adolescent or adult cannabis users.

Highlighting the questions we still need to answer about weed might be more productive than blaming it for unfounded health effects.

Another review concluded that “its long-term cognitive effects remain controversial, are influenced by many confounds and appear to subside a month after stopping use of the drug.” These “confounds” refer to variables that prevent us from concluding that any cognitive impairments seen in study participants were due to cannabis, and not something else, such as alcohol or other drugs they may have been using at the time.

Plus, “cannabis” is such a broad term. When Trump says it “causes an IQ problem,” it’s not clear whether he’s referring to taking edibles or smoking flower, for instance, or low- or high-potency products. “That’s almost apples and oranges,” Fong says. “Even though it’s the same plant, it’s a whole different set of factors."

How fast the tetrahydrocannabinol (THC, the compound in cannabis that gets you high) enters your bloodstream, how much THC is in your bloodstream, and how it moves through your body will vary depending on the product you use. In other words, it’s not scientifically accurate to say that weed lowers your IQ when there are so many types of cannabis products, each with different effects.

While Fong likes the idea of spurring a national dialogue about cannabis and how it isn’t completely harmless, highlighting the questions we still need to answer about it might be more productive than blaming it for unfounded health effects. “If I were President of the United States, I would say, this is a critical social and scientific issue,” he says. “We need to study how should we be using cannabis to improve health and how do we limit the dangers of cannabis.”

More like this
Chuck Schumer's legal weed bill is actually pretty good
By Rafi Schwartz
Here's how scientists plan to create a less addictive opioid
By Aaron W. Harrison
All the Subway tuna sandwich drama, explained
By Joseph Lamour
Stay up to date