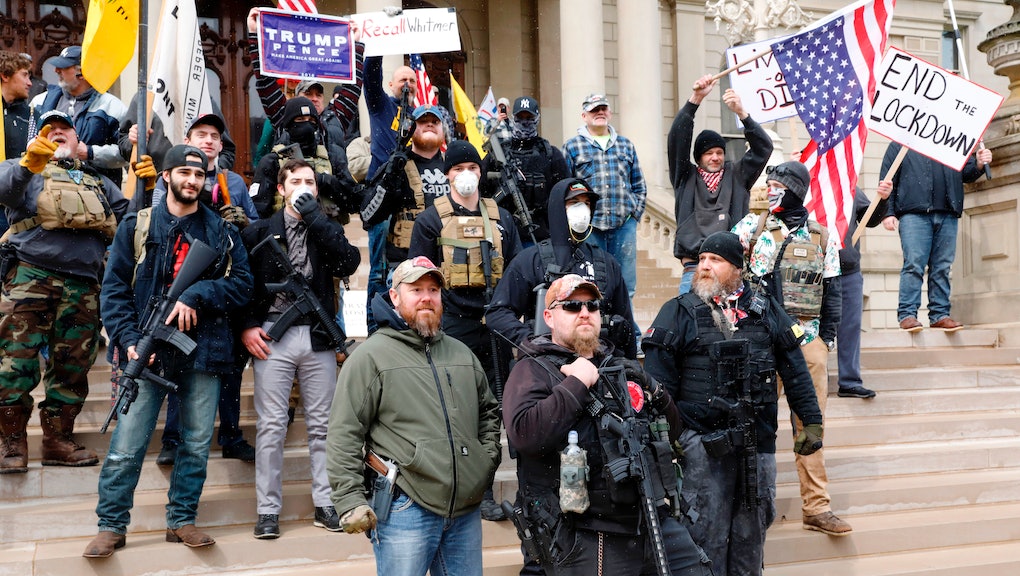 On Thursday evening, just ahead of the public unveiling of his much hyped plan for "reopening" the country in the wake of the coronavirus pandemic, President Trump privately assured America's governors that they would "call [their] own shots" when it comes to deciding when and how to regain some semblance of normalcy in their respective states.

Less than 24 hours later, however, the president lent his considerable (and considerably dangerous) influence to the growing number of, shall we say, medically inadvisable right-wing protest movements popping up against the governors behind states' varying stay-at-home orders. Notably, while the overwhelming majority of states have some form of stay-at-home rules in effect, the president chose to target three with Democratic governors — states which, incidentally, represent crucial electoral battlegrounds for this coming November.

As Media Matters For America senior fellow Matthew Gertz pointed out, Trump may have been following the lead of Fox News, which minutes earlier had featured a segment on the "Liberate Minnesota" Facebook group and rally scheduled to take place Friday outside Democratic Gov. Tim Waltz's St. Paul home. The event was scheduled to protest the state's extremely successful efforts to mitigate the spread of coronavirus.

Most alarming, however, was the conclusion to the president's insurrectionist triptych:

Unlike Minnesota and Michigan, Trump made special point to tell Virginians — whose state has continued to be a hotbed of white supremacist and far-right activity in the years since the racist Charlottesville rally — that liberating their state would "save your great 2nd Amendment."

It's easy to see how language used by the president here — the directive to "liberate," "2nd Amendment," "under siege" — could be taken by Trump's supporters as a call to actual violence. It also mirrors his statement that "2nd Amendment people" could "do" something about then-candidate Hillary Clinton during the 2016 presidential election.

In fact, at an anti-stay-at-home rally in Michigan earlier this week — one reported funded by current Trump Education Secretary Betsy DeVos — many of the protesters were indeed heavily armed. Fortunately, no one was actually shot.

Still, given the president's persistent agitating and the increased politicization of simply trying to keep people alive during this pandemic, it seems more and more likely that it's just a matter of time before someone takes the president's apparent hint.

More like this
A GOP anti-masker got banned from planes, so she had to take a boat to work
By Rafi Schwartz
The CDC's eviction freeze has been unfrozen by a federal judge
By Rafi Schwartz
West Virginia is bribing young people to get vaccinated with cold hard cash
By Vanessa Taylor
Stay up to date