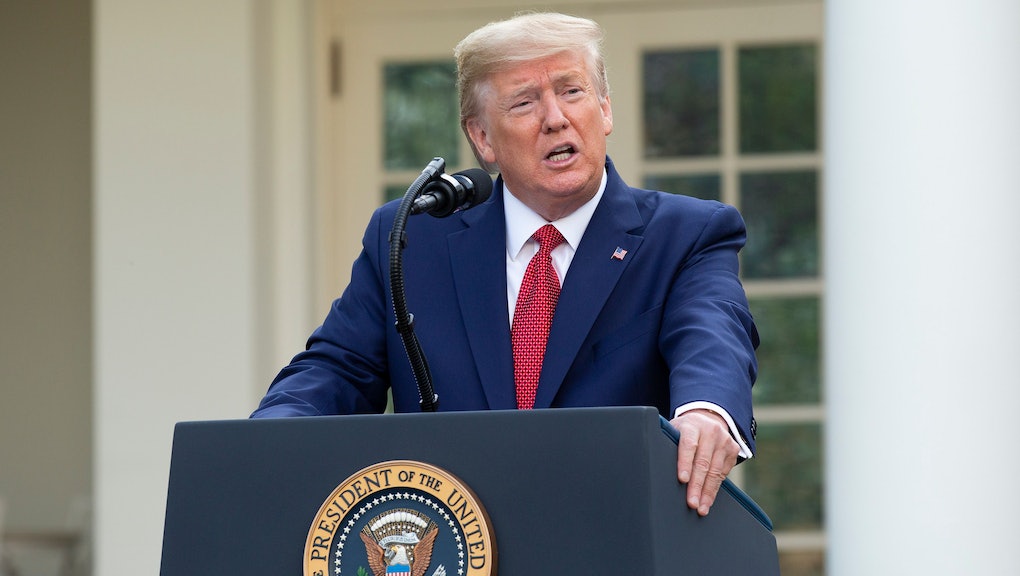 President Trump has finally let go of his dream of packing churches on Easter despite the ongoing pandemic. On Sunday, Trump extended social distancing to April 30. Although it's certainly a switch-up from his earlier comments, the decision is welcomed by experts.

The nationwide social distancing guidelines were set to expire Monday. It seemed likely that Trump wouldn't extend them, given he spent last week announcing his intentions to restart the economy by Easter, which is less than two weeks away. Reportedly, his plans were partially driven by his own boredom.

However, Trump is now apparently choosing to follow expert advice. At Sunday's White House press conference, Trump acknowledged a model which predicts the coronavirus's peak death rates are still two weeks out. There are already over 2,600 recorded coronavirus deaths in the U.S.

"Nothing would be worse than declaring victory before the victory is won," Trump told reporters. "That would be the greatest loss of all."

Trump's decision didn't come out of nowhere. It was partially driven by Dr. Anthony Fauci, director of the National Institute of Allergy and Infectious Diseases, who appeared on CNN on Sunday morning. There, Fauci warned about the difficulty of making a prediction regarding deaths, saying, "It's such a moving target that you could so easily be wrong." But he did add that there will be millions of cases, and likely between 100,000 to 200,000 deaths.

Both Fauci and Dr. Deborah Birx, whom Vice President Mike Pence tapped to help lead his coronavirus task force, helped put together the model Trump cited during his press conference. Birx also had an interview Sunday morning, where she told NBC News that "no metro area will be spared" from the coronavirus pandemic.

"The sooner we react and the sooner the states and the metro areas react and ensure that they have put in full mitigation ... then we'll be able to move forward," Birx said.

Even though Trump backtracked from his earlier insistence on restarting the economy early, against the advice of health experts, he still won't admit his original position was a mistake. The Hill reported that Trump described it as "aspirational," stating, "We had an aspiration of Easter, but when you hear these kinds of numbers and you hear the potential travesty, we don’t want to do anything where — we don’t want to have a spike up."

Overall, Trump said that keeping the death rate to 100,000 or fewer in the United States would be a "very good job." However, in an interview on the Today show, Birx said that even if "we do things almost perfectly", she predicts deaths will still reach up to 200,000.

As frustrating as it is to watch Trump's coronavirus response, it is good to see him actually following experts. Even if it's a temporary change, Trump is regarded as a trusted source among many Republicans. If he says it's safe to go out, it's likely that many would, but we need everyone to stay inside now.

More like this
Vaccines are good. Threatening to evict someone over them is not
By Rafi Schwartz
I never want Tucker Carlson to stop talking about Nicki Minaj's cousin's friend's enormous balls
By Rafi Schwartz
Wow, Donald Trump is actually following through on a threat to sue someone
By Rafi Schwartz
Stay up to date