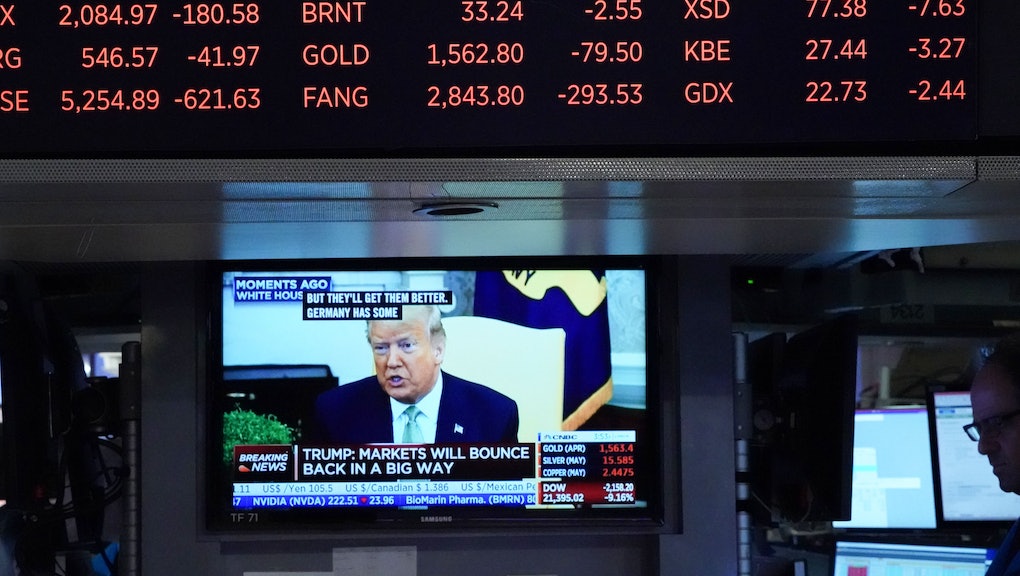 On Thursday morning, just hours after one of the most mind-bending evenings in recent political memory, Wall Street abruptly stopped trading as stocks took a swan dive and the market chugged headfirst into its first bear territory in more than a decade, amidst the White House's floundering response to the coronavirus pandemic.

Despite these giant warning lights — ones that to at least some analysts seem not dissimilar to the pre-2008 recession era — President Trump on Thursday insisted that everything was not only hunky-dory but, in fact, better than ever.

In fact, while Trump is technically correct that the market is marginally higher than when he took office, the truth is that his disastrous handling of the coronavirus crisis has contributed to enough of a Wall Street panic to essentially erase many of the gains Trump inherited and enjoyed during his administration. And for a president who has made a habit of personalizing the market's trajectory, Trump seems incapable of thinking of the pandemic in anything other than economic terms — specifically, those that make him look good.

"With gasoline prices coming down, that's like a tax cut," Trump insisted, as the market tanked earlier this week after Saudi Arabia slashed oil prices. He added elsewhere during his remarks that "we want to lose as few people as possible" to coronavirus, before asking the press pool for the exact number of American coronavirus fatalities — a statistic that, despite his professed concern for human life, he didn't seem to have off the top of his head.

More like this
New York has set aside a massive, first-of-its-kind fund for undocumented workers
By Rafi Schwartz
Um, Biden's big immigration deal seems pretty similar to Trump's
By AJ Dellinger
John Cornyn is either incredibly dumb, incredibly craven, or incredibly both
By Rafi Schwartz
Stay up to date