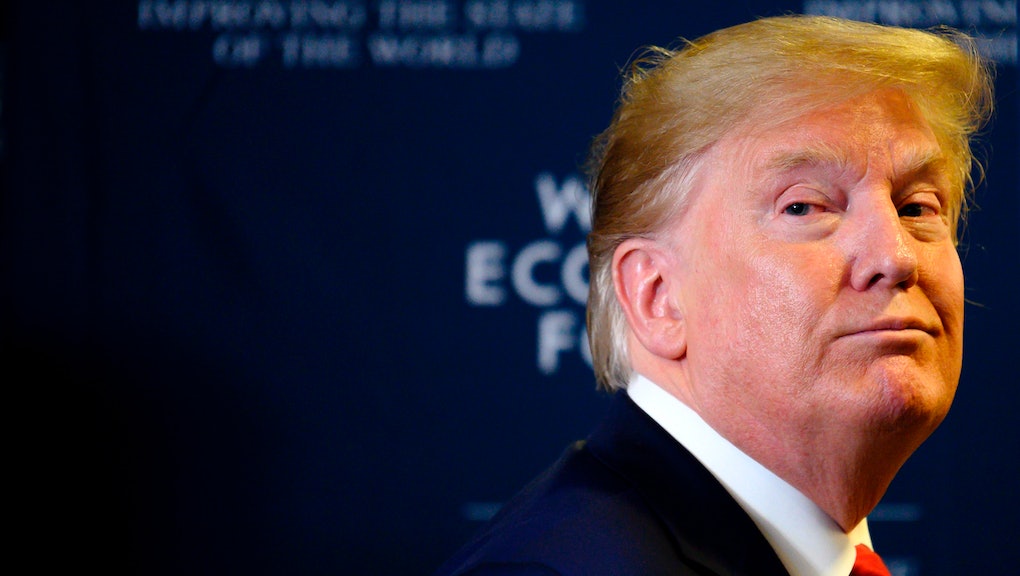 One of the most consistent themes of Donald Trump’s chaotic presidency is his inability to resist a brag — even when doing so appears to confirm he violated the law. The man simply can’t resist a cheap shot. And shots don’t come much cheaper than bragging that you’ve kept crucial documents away from investigators while facing impeachment on charges of obstruction of justice.

So naturally, Trump basically confirmed the gambit Wednesday morning at the World Economic Forum in Davos, Switzerland. "Honestly, we have all the material,” he said. “They don't have the material." This is definitely true. It’s also definitely an unwise thing for someone who’s been accused of hiding evidence to say. Florida Rep. Val Demings, one of the Democrats’ impeachment managers, immediately seized on the comments.

Trump’s remarks also beg the question: If the phone call with the Ukrainian president was really so “perfect,” why wouldn’t he just hand over whatever material he’s hoarding?

The obvious answer is that he’s getting away with something, and everyone knows it. That’s the sad, frustrating fact about impeachment — Trump has essentially been given a blank check by Republicans to flout any rule he wants without facing consequences, and he’s cashing it in. They’ve declared that they don’t believe the impeachment inquiry to be legitimate, so why not just admit to the illegal actions as he knows he won’t be punished for them anyway?

Despite presumably giving his lawyers a lifetime’s worth of ulcers, Trump has used this tactic often before, whether as an intentional strategy or just because that’s the kind of person he is. Recall, for example, when he said that China should investigate the Biden family in a televised interview on the White House lawn, while he was already facing scrutiny for the emerging details of his pressure campaign for Ukraine to do exactly that. Even the summary transcript his own White House released to the public of Trump’s call with the Ukrainian president shows Trump asking his counterpart to “do us a favor” and investigate the Biden family. There too was his infamous call for “Russia, if you’re listening” to release Hilary Clinton’s emails in 2016; of course, he denied ever enlisting foreign help in that election. The verbosity virus seems to have infected some members of his staff, even, as when Mick Mulvaney confirmed the suspected quid pro quo to a roomful of reporters and told them to "get over it."

When it comes to obstruction, though, Trump seems to be saying, “Sure, I did it, and it’s working. What are you going to do, impeach me?”

Strangely, these declarations seem to have had the effect for some of neutralizing the charges against him; we’re used to the historical precedent of our leaders denying and covering up their misdeeds after all, from Richard Nixon to Bill Clinton. So if Trump is just admitting to something, it can’t be that bad, right? Otherwise, he’d have keep it a secret. Unfortunately, conventional reason doesn’t always apply with this president.

Of course, these shameless admissions also often come after dogged reporting and whistleblowers have revealed Trump’s misdeeds; remember how much pressure was put on the White House before the “perfect” call’s summary memo was released in the first place. When it comes to obstruction, though, Trump seems to be saying, “Sure, I did it, and it’s working. What are you going to do, impeach me?”

With the Democrats’ strongest opposition tool already on the table, there’s nothing left to dangle before Trump to get him to not commit crimes to his benefit. The only force that seems capable of stopping him from further malfeasance is the will of the voters this fall.