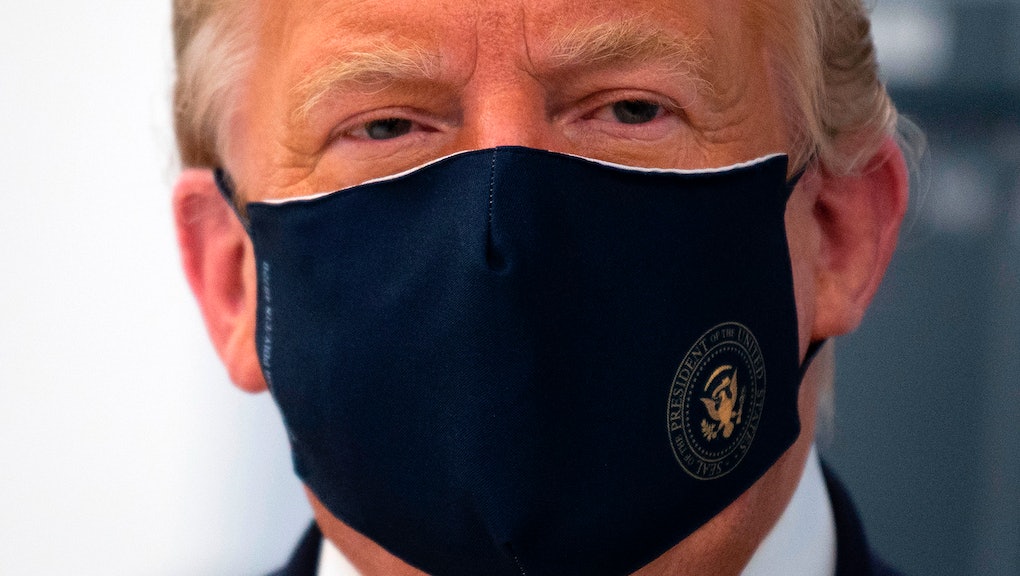 Last week, President Trump embraced a more somber tone at a coronavirus press conference. That, combined with his decision to finally wear a mask in public, led some to believe that after months of downplaying the pandemic the commander-in-chief was finally ready to take the virus seriously. Those hopes didn't even last a week. On Monday night, President Trump and his son, Don, Jr., shared a video containing conspiracy theories about coronavirus, including claims that a cure is available and advice for people to stop wearing masks.

The video first made the rounds on Facebook, pushed by far-right news outlet Breitbart. It racked up more than 14 million views over the course of just six hours before Facebook finally took action on it and removed the video from its platform. Despite being wiped from Facebook for spreading false information, it found life on YouTube, gaining traction on Breitbart's channel before Google removed it.

The video continued to spread on Twitter, where it was given a significant signal boost when President Trump retweeted a tweet that featured the video. The tweet claimed that Dr. Fauci has been working with Democrats to suppress the use of hydroxychloroquine in order to "perpetuate COVID deaths and hurt Trump."

Donald Trump, Jr. also shared the video but did so directly rather than simply retweeting it. He called it a "much [sic] watch." His tweet, along with the tweet that President Trump retweeted to his 84 million followers, was eventually removed on Tuesday morning. Don Jr. was temporarily suspended from tweeting, a punishment for sharing "misleading and potentially harmful information related to COVID-19." A spokesperson for Twitter tells Mic that "Tweets with the video are in violation of our COVID-19 misinformation policy." Facebook did not respond to a request for comment.

A version of the Breitbart video pushed by the Trumps and other prominent conservative voices on social media featured a number of doctors who claimed that hydroxychloroquine, an antimalarial drug that has been promoted for months by President Trump, can "cure" patients of coronavirus. The voice most central to the video belongs to Stella Immanuel, a medical professional who currently practices in Texas and previously worked as a doctor in Nigeria. Immanuel said over the course of the video that "You don't need a mask," and "We don't need to be locked down," because "there is a cure for covid." Immanuel also claims to have healed hundreds of people who contracted coronavirus by prescribing them hydroxychloroquine. Though it has been favored by President Trump, the idea that hydroxychloroquine is some sort of miracle cure for coronavirus does not have any basis in reality.

Immanuel also has a history of deranged and completely bogus medical claims beyond her thoughts on coronavirus. She calls herself a “Deliverance Minister” and regularly pushes socially conservative and regressive ideologies. She has previously promoted conspiracy theories claiming that "the gay agenda, secular humanism, Illuminati and the demonic New World Order" are attempting to "destroy our homes, families and the social fiber of America." According to a report from the Daily Beast, she has previously claimed on multiple occasions that gynecological problems like cysts and endometriosis are the result of people having sex dreams about demons and witches. She has also claimed that alien DNA is used in medical treatments and that scientists are trying to create a vaccine that would prevent people from believing in religion.

After the video was removed from social media, she threatened Facebook with the wrath of God. In a tweet, she warned the company that their "computers with start crashing" until they restore the video and that "[Facebook] will be down in Jesus name." The Trumps and other conservatives, meanwhile, have used the removal of the video to continue to push their narrative of media suppression, suggesting that removing false information is actually censorship — an odd tact for someone who claims to be so opposed to fake news.

The incident underscores how challenging it is to stop misinformation from spreading online, particularly when it’s shared by people with massive platforms. As many as 14 million people saw the video on Facebook before it was removed and it is likely to return to the platform many times over, clipped and shared repeatedly while the company attempts to moderate it. Even if the spread is controlled on Facebook, the wildfire can carry over to other social media and allow it to live on. By the time Twitter finally took action against the video, it had already spread widely. Stopping these types of videos is effectively a game of whack-a-mole, and it certainly isn’t made any easier by the country’s highest officeholder willingly participating in the spread of misinformation.

More like this
Why is Facebook this confused over letting Donald Trump back?
By Rafi Schwartz
Instagram now lets you add pronouns to your profile. Here's how to do it
By AJ Dellinger
Biden's pledges aren't enough to avoid the worst effects of climate change, new study says
By AJ Dellinger
Stay up to date