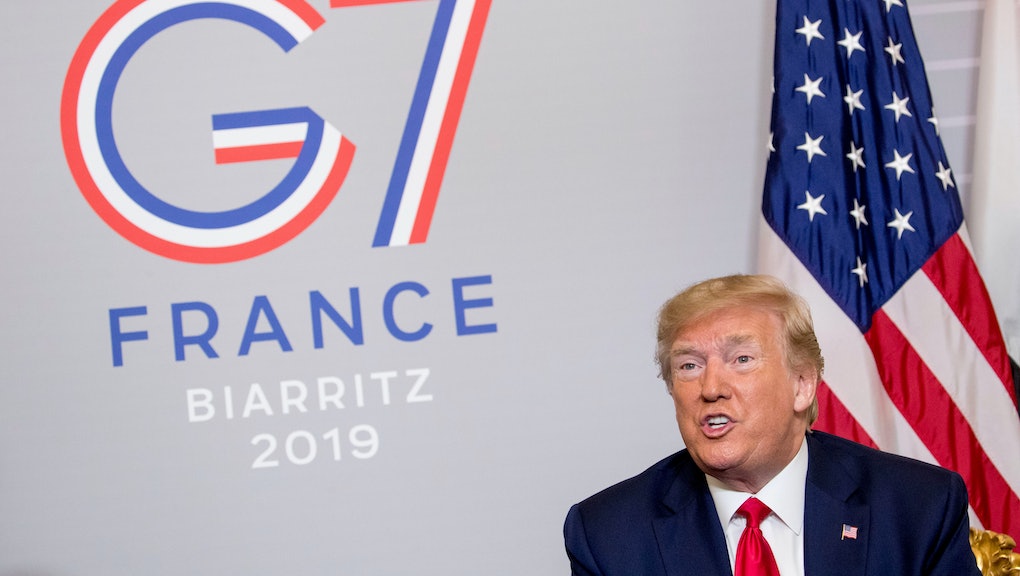 In what can best be described as a comedy of errors, President Donald Trump skipped a G7 meeting session dedicated to climate change during the G7 summit in Biarritz, France. The decision to ditch the meeting came after members of the Trump administration bashed the annual meeting of world leaders for focusing on "niche" issues like the deteriorating state of the planet on which we all live. Instead of even lending his presence to the conversation, at the risk of given the slightest appearance that the United States is concerned about the climate, the president instead spent the time tweeting.

Trump's absence during the climate meeting was noticeable. After all, it's a small gathering of the most powerful and influential political leaders from around the world, not a lecture hall-sized class. Trump's chair sat empty for the entirety of the conversation while French President Emmanuel Macron launched into a conversation that focused on the health of the climate, oceans, biodiversity and the fires in the Amazon. According to the White House, a member of Trump's administration from the National Security Council attended the meeting in his place, and Macron noted in a news conference after the event that while Trump wasn't in the room, "his team was" in an attempt to create the appearance of unity among G7 countries in addressing climate change.

It's one thing that Trump wasn't in attendance, but the president and his people couldn't seem to get the story straight in explaining what he was doing instead. When it was clear that he wasn't coming to the meeting, the White House was asked about his absence. Press secretary Stephanie Grisham told the press that President Trump had "scheduled meetings and bilaterals with Germany and India," and said those meetings went long, preventing him from attending the climate conversation. The problem with that explanation is that CNN documented that both German Chancellor Angela Merkel and Indian Prime Minister Narendra Modi were at the climate meeting and could be seen in the room when the conversation started. Trump did meet with Merkel while the climate meeting was ongoing, according to the Associated Press, but couldn't be bothered to show up for even part of the climate conversation.

Making matters worse is that it doesn't appear like anyone gave the President of the United States a heads up on what his excuse was for missing the meeting. In a brief interaction with the press following his meeting with Merkel, he was asked if he was able to attend the climate meeting. "I'm going to. In fact, it's going to be our next session. I want clear air and clean water," Trump said, according to The Hill. He went on to say that the meeting was happening "in a little while," according to the AP, apparently completely unaware the meeting was happening as he spoke.

Trump's position on climate change has been pretty well documented at this point. He's willfully and gleefully chosen to misinterpret the concept of global warming, claiming that we actually need it in order to deal with record levels of freezing temperatures — despite the fact that global warming deals with the rising level of the Earth’s average surface temperature and not simply the weather, and the shifting climate results in more extreme weather events, not just heat. He has claimed that climate change is a hoax created by the Chinese government in order to make manufacturing in the U.S. less competitive, somehow. He has also governed in line with those beliefs, passing laws that would actively harm and degrade our already delicate climate. His administration has rolled back safety restrictions on offshore drilling operations to allow the same kind of drilling that resulted in the 2010 BP oil spill, killed off vital parts of the Endangered Species Act that protect animals and their environments, cut NASA's climate monitoring program that tracked global carbon emissions, gotten rid of car emissions standards to allow car manufacturers to produce vehicles that guzzle more fossil fuels, and removed mention of climate change anywhere on the public record whenever possible. He's also happily placed foxes in charge of the hen house, appointing climate change denier and current coal industry lobbyist Scott Pruitt to head up the Environmental Protection Agency in 2017, replaced him with fellow climate change denier Andrew Wheeler in 2018 and put former oil lobbyist David Bernhardt in charge of the Department of the Interior earlier this year.

Given that, it's not surprising that Trump would duck out of a climate meeting that he likely had no interest in, seeing as he hasn't even expressed belief in the scientific consensus that is the basis of the conversation. It's also not a shock to learn what the president was actually doing as world leaders attempted to deal with one of the most important issues facing humanity: he was tweeting. Specifically, Trump took to Twitter in an attempt to address a report from Axios that claimed the president has asked about the possibility of nuking hurricanes in order to stop them from reaching the shores of the U.S. According to the report, Trump suggested, on multiple occasions, dropping nuclear bombs on forming hurricanes. "We drop a bomb inside the eye of the hurricane and it disrupts it. Why can't we do that?" he reportedly asked. Trump, of course, denied ever suggesting such a thing and decried the report on Twitter as "fake news."

The thought of nuking hurricanes is actually not unheard of, though it is certainly a bad idea. The book Almighty Atom: The Real Story of Atomic Energy, first published in 1945, suggested using atomic weapons on polar ice caps in order to melt them and remake our climate. The thought was that doing so would help warm the world and would provide necessary water to drought-plagued regions. Politicians and some scientists also explored the concept of nuking storms in the 1950s but eventually abandoned the idea, though it's still potentially taken hold in the mind of Trump. The concept is apparently popular enough that the National Oceanic and Atmospheric Administration (NOAA) has taken steps to address it, going so far as to say that actually following through on dropping a nuclear weapon to stop a hurricane would have "devastating" effects. The agency says plainly, "this is not a good idea."