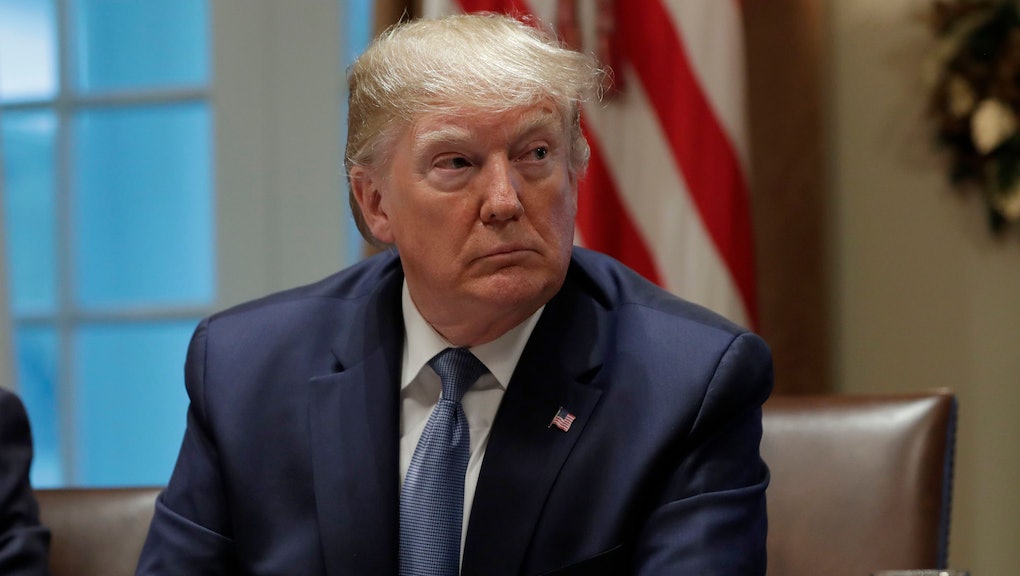 In a speech to a Jewish group in Florida over the weekend, President Trump sparked controversy by invoking what many have referred to as anti-Semitic tropes. Speaking to the Israeli American Council, Trump said that his Jewish audience had “no choice” other than to vote for him — because the Democratic candidates would take away their money.

“A lot of you are in the real estate business, because I know you very well. You’re brutal killers, not nice people at all,” Trump said. “But you have to vote for me — you have no choice. You’re not gonna vote for Pocahontas, I can tell you that,” he added, using an insulting nickname for Massachusetts Sen. Elizabeth Warren, who is one of the leading candidates for the Democratic nomination. He continued: “You’re not gonna vote for the wealth tax. Yeah, let’s take 100 percent of your wealth away!”

The extrapolation here for many onlookers was that Trump seemed to be insinuating that Jewish people are driven above all by money. It’s one of the oldest stereotypes in the world, and he’s not shy about deploying it.

“Some of you don’t like me. Some of you I don’t like at all, actually,” he told the assembled audience. “And you’re going to be my biggest supporters because you’re going to be out of business in about 15 minutes if [the Democrats win the election]. So I don’t have to spend a lot of time on that." The White House did not immediately respond to Mic's request for comment about Trump's weekend remarks.

This statement appears to hinge completely on the notion that Jews have no motivation other than profit. In the room at the IAC, a conservative group, Trump was met with cheers and chants of “Four more years,” according to The Washington Post. The right-wing Rabbi Shmuley Boteach, who was in the room, tweeted that the speech was “one of the most pro-Israel speeches ever delivered by an American president.”

Matt Brooks, executive director of the Republican Jewish Coalition, posted on Twitter that those upset by the president describing Jews as motivated by money should "get over yourselves," adding, “He literally talks about this at every rally!”

But outside of the room, Trump faced criticism from a wide variety of Jewish groups, including the The Jewish Democratic Council of America, which said that the president’s use of “deeply offensive” and “unconscionable” stereotypes “only reinforce[s] our belief ... that Donald Trump is the biggest threat to American Jews.”

Trump also made several statements that seemed to invoke the dual-loyalty trope — the anti-Semitic notion that Jews are more loyal to Israel than to anywhere else. Referring to American Jews, he said, “We have to get them to love Israel more, because we have people that are Jewish people that are great people — they don’t love Israel enough.”

The implication that Jews have an ethnic obligation to support Israel echoes comments that Trump made in August. “Any Jewish people that vote for a Democrat — I think it shows either a total lack of knowledge or great disloyalty,” he said. According to The New York Times, the dual-loyalty trope started as far back as the Middle Ages, in order to paint Jews as outsiders and traitors to their countries.

“American Jews ― like all Americans — have a range of political views and policy priorities,” said American Jewish Committee CEO David Harris, in an interview with The Washington Post. “His assessment of their knowledge or ‘loyalty,' based on their party preference, is inappropriate, unwelcome, and downright dangerous.”

Jewish groups condemned his remarks. The American Jewish Committee, a centrist Jewish organization, further addressed Trump’s comments on Twitter, writing to Trump that as “much as we appreciate your unwavering support for Israel, surely there must be a better way to appeal to American Jewish voter ... than by money references that feed age-old and ugly stereotypes.”

Trump’s comments come at a time when some factions of the Republican Party are flirting openly with white nationalism. Far-right immigration czar Stephen Miller was recently exposed as a vocal proponent of white nationalist websites like VDare — a revelation that follows years of reporting on Miller's white supremacist tendencies and has prompted widespread calls from Democrats to resign. Incendiary Fox News host Ann Coulter, meanwhile, discussed the professors who testified last week at the impeachment hearings in the House Judiciary Committee by saying there was “too little ethnic diversity among the professors for me to take them seriously.” While Coulter didn't specify what she was referring to, as The Jewish News of Northern California pointed out, "considering her past flirtations with anti-Semitism, one could conclude she wasn't faulting the professors just for being white."

None of these things should be acceptable to say. But Trump and his cronies always have a defense for everything. In his remarks Saturday, Trump repeated a claim he's made frequently: that he's been Israel's greatest ally in the White House. But even that line of defense explicitly links that country and American Jews. And as long as the message from the top flirts with various forms of bigotry, there’s no reason that followers of the president won’t blow their dog whistles even louder.