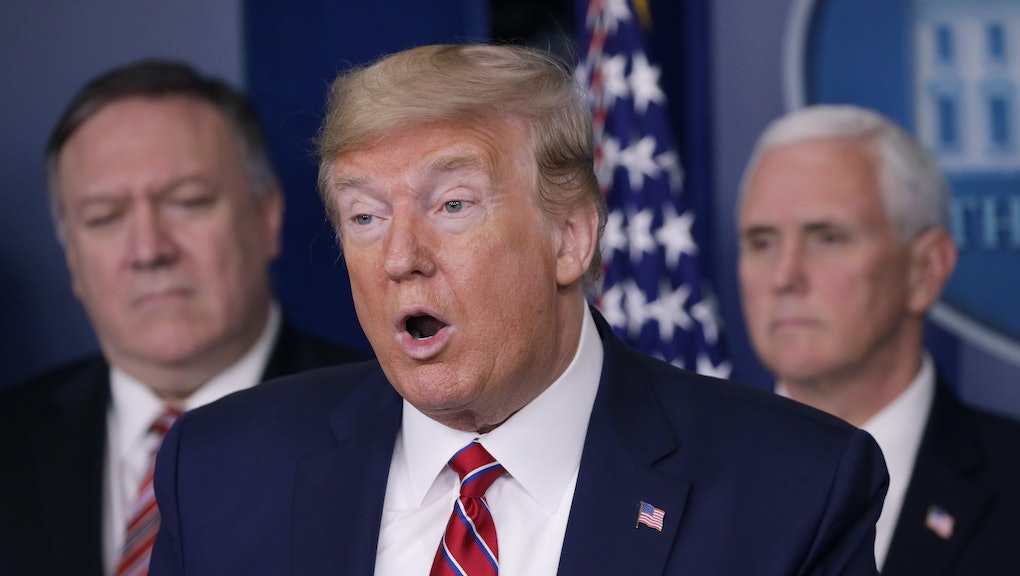 The same day that reported U.S. cases of coronavirus nearly doubled over a 24-hour period — from 4,317 to 8,819 according to CNN — President Trump led a manic, marathon press conference that seemed to be as much about grievance-airing as it was about providing some semblance of leadership for a nation on edge.

In what has become a daily occurrence over the past week, Trump's coronavirus-themed press conference did offer some concrete updates on the country's pandemic response. The president confirmed he had invoked the Defense Production Act to help meet the increased demand medical supply, as well as announced that he would shut down all non-essential boarder crossings between the U.S. and Mexico. But the briefing will likely be remembered more for Trump's temper tantrum when NBC News's Peter Alexander asked him what words he'd offer to comfort a scared American public.

"That's really bad reporting. And you'd better get back to reporting instead of sensationalism," Trump said, seemingly oblivious to the fact that NBC News had announced the death of longtime staffer Larry Edgeworth just hours earlier.

Trump also doubled down on trusting his gut when it comes to the coronavirus outbreak. Asked by Alexander about his lauding an unproven malaria treatment as a possible remedy for COVID-19, Trump insisted, "I feel good about it," and "I'm a smart guy," while acknowledging in the same breath that "it may not work."

Additionally revealing was Dr. Anthony Fauci's physical reaction when, later in the 90-minute press conference, Trump referred to the Department of State as the "Deep State Department" while talking about Secretary of State Mike Pompeo.

It's unclear whether Fauci, the nation's leading infectious disease specialist, is trying not to laugh, trying not to cry, or trying to desperately keep whatever shred of dignity remains in his body. He has notably broken with Trump's rhetoric on coronavirus at times in his own updates to the public.

In a truly Veep-esque twist, Friday's press conference was graced by none other than former White House press secretary and dance competition contestant Sean Spicer, whose new gig with the ultra-conservative Newsmax outlet apparently earned him entree back into the briefing room.

The president either pretended he had no idea who Spicer was, or genuinely did not recognize his former top comms man:

Compounding the weirdness of Spicer's presence was the fact that his question — regarding the breaking allegations of insider trading from a cadre of U.S. senators — was actually not bad. The president's answer, however, was.

"I'm not aware of it," Trump began, before immediately contradicting himself by adding that "I saw some names. I know all of them. I know everyone mentioned."

While it's a genuinely refreshing change to have daily press briefings from this administration once again, it was easy to forget that the more the president speaks in front of a crowd of reporters, the more unhinged he becomes. And as the coronavirus death toll continues to steadily rise across the country, now really isn't the time for that.

More like this
New York will finally offer vaccines to all inmates, after a judge's order
By Vanessa Taylor
Jailhouse lawyer Johnnie Cook is fighting for pandemic justice
By Mai Tran
The GOP's anti-trans crusade is ramping up — and explicitly targeting kids
By Vanessa Taylor
Stay up to date