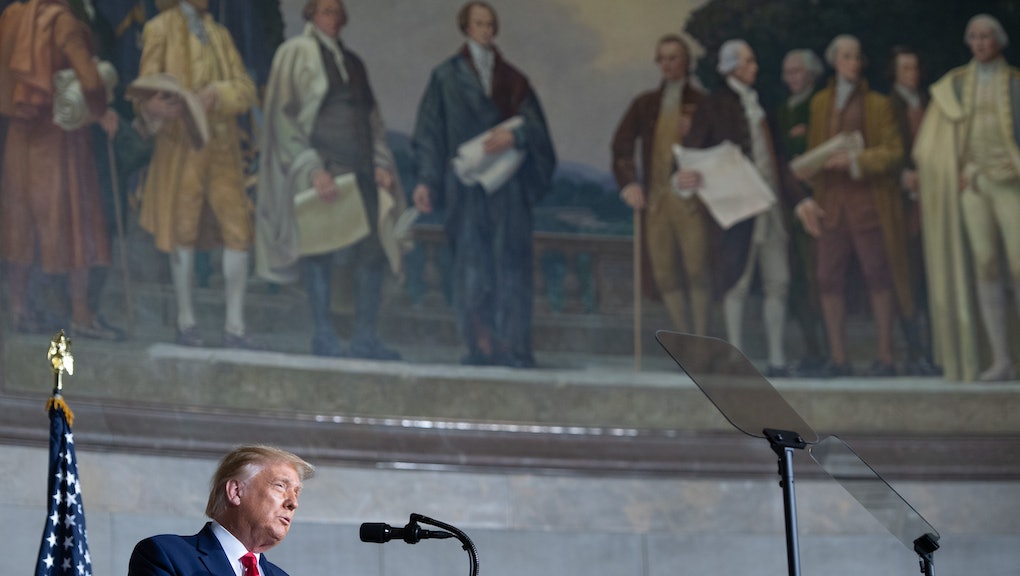 There's a screen shot that MSNBC segment producer Adam Weinstein tweets every single time the Trump administration and its extended network of cronies plant their jackboots across the face of those utterly ineffective "norms" that are supposed to prevent America from reaching what now what seems like the inescapable conclusion of the Trump presidency. It reads, simply, "This Is Fascism."

As far as Twitter shticks go, it's a pretty good one, and one I've been thinking about more and more — particularly after the president's announcement Thursday that he plans to launch a "1776 commission" to "encourage our educators to teach our children about the miracle of American history."

The commission, Trump explained, was created in part to combat the influence of the New York Times' award-winning 1619 project, which frames American history in the context of slavery and racial oppression, particularly against Black people.

To Trump, this type of historical examination represents "toxic propaganda" and "ideological poison" which, he threatened ominously, "will destroy our country." He had, in fact, previously threatened to cut funding for schools that taught curriculum derived from 1619 project.

Meanwhile, although the 1776 commission itself is a new project, the administration had foreshadowed its creation for several weeks, listing as one of its goals for a hypothetical second term in office the "teach[ing of] American exceptionalism." It's a phrase that was sharpened (or blunted, depending on how you wanna take it) during the president's Thursday remarks, during which he hyped up "the development of a pro-American curriculum that celebrates the truth about our nation’s great history."

There are, it seems, two interrelated things happening here — each alarming in its own respect.

First, the Trump administration is attempting to illegally strong-arm schools into abandoning a nuanced and critical curriculum for what certainly seems like a broad exercise in self-congratulatory nationalism. As Education Week noted, under the Every Student Succeeds Act, the government is not allowed to dictate curriculum, nor can it use federal funds to that effect. And while the Trump administration — and congressional Republicans — seem perfectly willing to allow the White House free reign to pick and choose which laws it intends to follow; the fact remains that forcing schools to teach one lesson over another is, indeed, illegal and would be at the very least, a major legal hurdle for the administration to clear, circumvent, or ooze its way under.

Which brings me to the second thing it seems the president is trying to do: use his administrative soapbox to force — if not overtly, then at least by his considerable executive influence — ahistorical fascism on a new generation of Americans. If history is, as it's said, written "by the victors," then the president's "pro-American" lesson plan represents an attempt to create an alternate historical record that will only embolden his MAGA supporters at the expense of, well, everyone else. Even if it's not adopted wholesale across the country, it will still be absorbed by enough of his supporters to create a serious schism in how people understand the history of this country.

The president's commission, then, of which we still know fairly little in the way of specifics, is less about creating a realistic educational curriculum as it is about creating the impression of one. It will almost certainly not be adopted by most schools. It's red meat for Trump's base — the sort of thing they can pore over and celebrate as an example of how, once again, Trump is striking a blow for freedom against those nasty, unpatriotic, uh...elementary school history teachers, I guess.

Fascism is as much about division as it is about totalitarian authority. It's about creating a "them" against which a collective "us" is justified and virtuous. That's what Trump is doing here. The 1776 commission is not about teaching patriotism — it's about othering anyone who would dare diverge from the party line the president is desperate to maintain in service of both his ego and power. Don't worry so much about whether the president's lesson plans will be taught in schools; that's not the point. The point is that he's making himself the arbiter of what is and isn't "American," and we're going to be dealing with the fallout from that for years to come.

More like this
Um, Biden's big immigration deal seems pretty similar to Trump's
By AJ Dellinger
Nearly half of Republicans believe absolute nonsense about Trump's Capitol coup
By Rafi Schwartz
John Cornyn is either incredibly dumb, incredibly craven, or incredibly both
By Rafi Schwartz
Stay up to date